Column: Burns’ Performance One for the Ages Tuesday Night 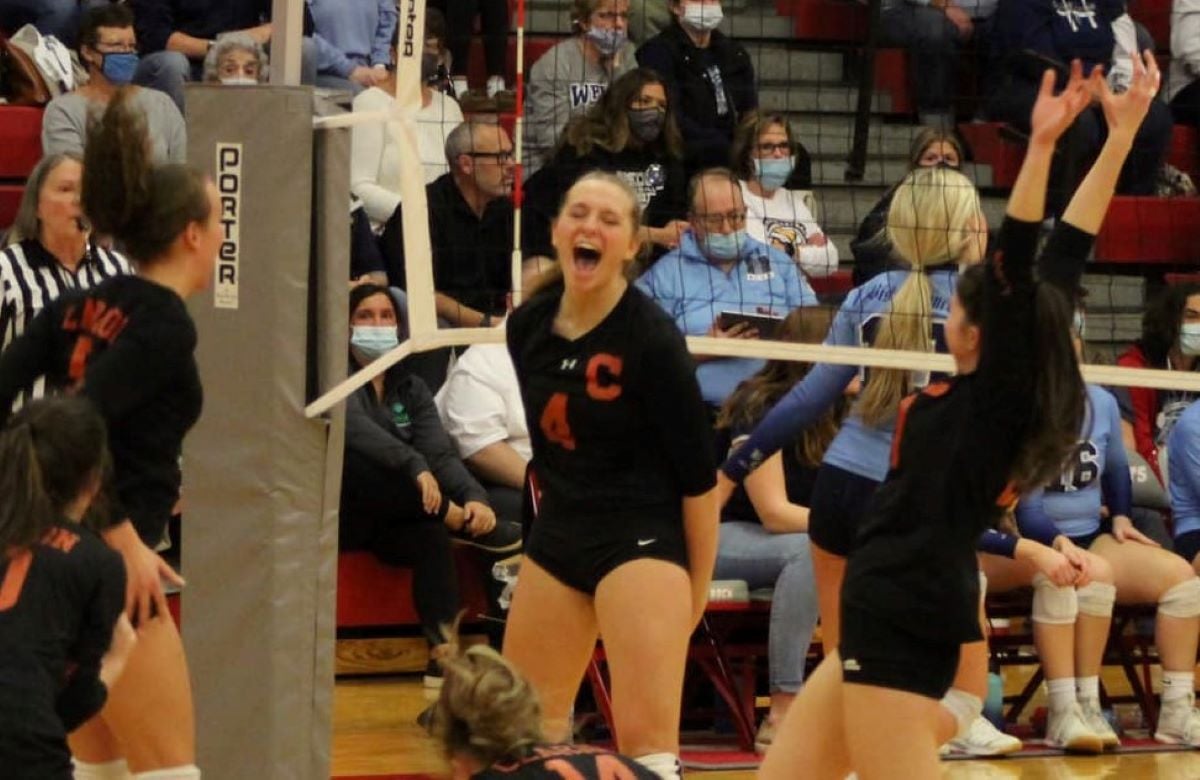 Korrin Burns (No. 4) reacts after a kill with teammates including Adia Needham (left) and Taylor Alston (right). Burns had a match of a lifetime with 33 kills Tuesday in the PIAA semifinals Photo by Nathan Girvan

SLIPPERY ROCK, Pa. – Sometimes an athlete does something that we will all remember for a lifetime.

Korrin Burns did that thing Tuesday night in Clarion’s 3-0 win over Bishop Canevin in the PIAA Class 1A semifinals.

Living up to her name, Burns scorched the Crusaders for 33 kills and left everyone in the gym just shaking their head at the performance.

“I can’t, like, like, unbelievable,” Clarion head coach Shari Campbell said when asked about her senior outside hitter.

A great outside hitter will average between five and six kills per set with the elite hitter getting into the sevens. Burns, one of the best players in Pennsylvania who is headed to St. Francis (Pa.) to play volleyball next year, came in averaging 5.9 kills per set.

Thirty-three kills in three sets is 11 kills per set.

That’s unheard of. That’s domination at another level.

For people who may not be versed in volleyball let me put it another way.

I have only ever really witnessed one performance by a female athlete in my 23 years of covering District 9 athletics that is even worthy of being in this discussion.

That was St. Marys Kayla Hoohuli in a PIAA Class 3A first-round basketball game against Hampton March 13, 2010.

She scored 52 points, grabbed 10 rebounds, came up with nine steals, and blocked five shots to lead the Lady Dutch to a 64-55 win.

That is what Burns did Tuesday night adding seven digs to her unreal hitting performance. But she did it on an even bigger stage.

The pressure on Clarion to get back to the PIAA 1A title match this year after winning it last year has had to be immense. Even if they don’t talk about it. The expectations both inside and outside the program are always to reach this level.

And things weren’t looking all that great for the Lady Cats early on when they got behind 20-14 in the first set Tuesday against the WPIAL champion who was looking for revenge after losing on its home court to Clarion in last year’s semifinal match.

But Burns wasn’t having any of it.

She helped Clarion go on a set-deciding, it was really a match-deciding, 11-3 run by recording six kills, including the last five for the Lady Cats.

It was a thing of beauty.

Some of them were rocket hits that left Bishop Canevin players just shaking their heads.

Others were tips that had the Crusaders wondering just what in the world they had gotten themselves into.

Overall, it was the moment great players are made for and one in which perhaps the greatest in Clarion history delivered on one of the grandest of stages.

No, it didn’t win the Lady Cats the state title. There is still work to be done for that against Sacred Heart Academy at 10:30 a.m. Saturday at Cumberland Valley High School in Mechanicsburg. But that chance might not be there if Burns hadn’t done what she did Tuesday night.

It is a night no one there will ever forget.

Clarion Senior Starters Reflect on 2021 Semifinal Win vs. 2020 Semifinal Victory
Burns Scorches Bishop Canevin for 33 Kills as Clarion Advances to PIAA 1A Title Match for 2nd Straight Year
This website or its third-party tools process personal data.In case of sale of your personal information, you may opt out by using the link Do not sell my personal information.
×
Manage consent