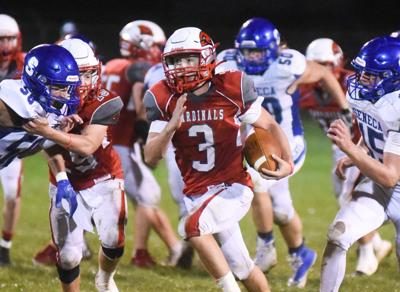 WARREN, Pa. – Cochranton’s Jack Martinec capped off a memorable regular season with a huge game in a 37-0 win over Saegertown, capturing the Week Nine D9and10Sports.com District 10 Jim Kelly Football Player of the Week powered by the Allegheny Grille in Foxburg in the process.

Martinec rushed for 258 yards and four touchdowns in the win over Saegertown as the Cardinals wrapped up a 7-0 regular season and a share of the Region 2 title. Martinec scored on runs of 4, 15, 61 and 12 yards.

The Cardinals earned the top seed and a bye in the first round of the D10 Class 1A playoffs.

District 10 Releases 2021 Football Brackets
Clearfield’s Kline, Redbank Valley’s Kahle Named Week Nine 2021 District 9 Jim Kelly Co-POWs Powered by the Allegheny Grille
We use cookies on our website to give you the most relevant experience by remembering your preferences and repeat visits. By clicking “Accept All”, you consent to the use of ALL the cookies. However, you may visit "Cookie Settings" to provide a controlled consent.
Cookie SettingsAccept All
Manage consent