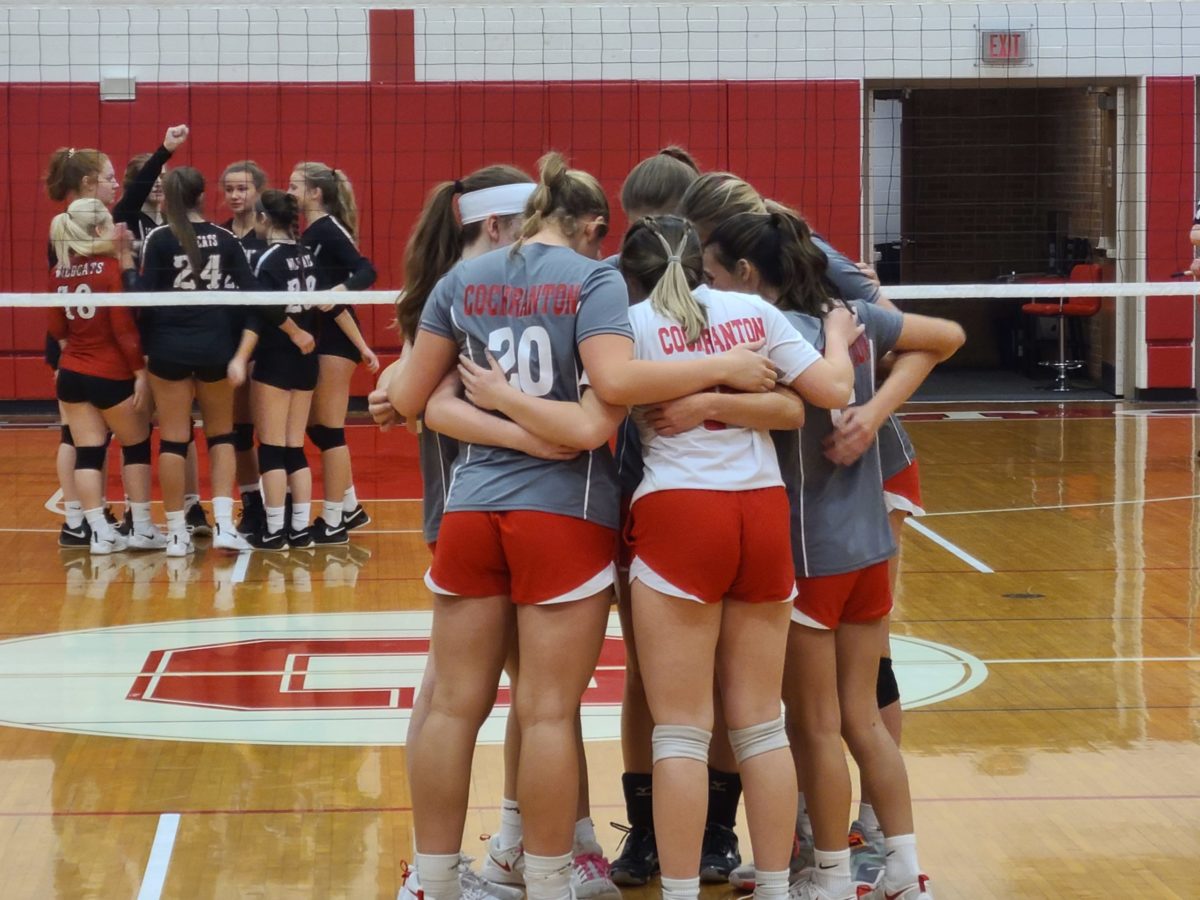 COCHRANTON, Pa. – The momentum swung like a pendulum during Tuesday’s PIAA Class 1A first-round volleyball matchup between Cochranton and Homer-Center.

“It was pretty exciting and pretty nerve-racking at the same time,” said Cochranton’s Taytum Jackson. “We had to push really hard in the fifth set. We should have had them in the third and fourth, but I’m just happy we battled back as a team.”

The impressive victory in the fifth set came after Homer-Center rallied from down 2-0.

Setter Dana Jackson fed Devyn Sokol early and often in the deciding set, , as she had three kills in the first five points. It was actually tied, 4-4 before Cochranton went on an 11-0 run to close out the match.

“I felt like we served pretty well today, one of our main goals was to serve tough,” said Cochranton coach Marci Malliard. “But I think we definitely have to pass the ball better. We have to have the opportunity to use all of our hitters and not just use our little outside swing all the time.”

Early on it seemed as if there was no way the match would go the distance. After trailing 11-8 in the first, Cochranton (18-2) went on a 9-1 to take control, as they got a couple of big serves from Jaylin McGill and a kill and a block from Sokol. Leading 17-12, Cochranton had no problem closing out the set.

The second set was all Cochranton right from the start, as they jumped out to a 10-3 as Sokol again had a couple of big swings, as did Brooklyn Needler. The lead grew as big as 20-7 and Cochranton closed it out.

Not only was the offense firing on all cylinders, but the defense, led by Chelsey Freyermuth (18 digs) and Jackson (15 digs) was locked in as well.

The third set was back and forth, as neither team was able to get more than a three-point edge the entire way.

The Wildcats’ Marlee Kochman put them up 24-23 and they closed it out on the next point to extend the match.

The fourth set was all Homer-Center, as they jumped out to a 10-0 lead before Cochranton got a point. Anna Cutshall and Macy Sardone both had kills during the early run for the Wildcats. Facing a huge deficit, Cochranton got it as close as three, 17-14 after a block from Eve Pfeiffer, but Homer-Center went on another huge run, 8-0 to close out the set.

Sardone was at the service line for both Wildcat runs in the fourth.

“Everyone has the experience that they can step up and do their part and put it all together like that,” Malliard said.

Up next for Cochranton is a battle in the PIAA quarterfinals (their last appearance came in 2019) with Bishop Canevin, a 3-0 winner over Oswayo Valley.

“I’m excited,” Jackson said. “Honestly, bring it on. We’ll be there playing our game.”

The Eagles fought gallantly in the fourth set erasing a 19-14 deficit to tie the set at 21 and then forged a tied at 22. But a net violation on Conneaut gave the River Hawks the lead for good.

Amber Clark ran the offense for the Eagles with 40 set assists while chipping in 12 digs, and Sylvia Prebor had six kills and three blocks.

Tia Bozzo ran the offense for the Titans with 40 set assists.

Shaler will face District 3 champion Hempfield (Lancaster) in the quarterfinals Saturday at a time and place to be announced. Hempfield beat District 1 third-place finishers Unionville, 3-0 (25-19, 25-20, 25-21).

No stats were provided.

Villa, McDowell Girls, Mercer Boys Advance in PIAA Soccer Playoffs
Defending Champ Clarion Rolls Past California in Opening Round of PIAA 1A Volleyball Playoffs
We use cookies on our website to give you the most relevant experience by remembering your preferences and repeat visits. By clicking “Accept All”, you consent to the use of ALL the cookies. However, you may visit "Cookie Settings" to provide a controlled consent.
Cookie SettingsAccept All
Manage consent