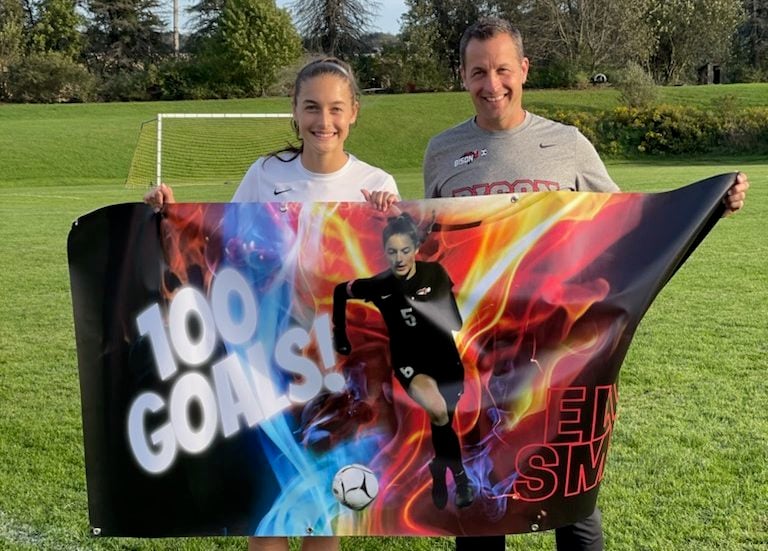 Smith scored three goals in the contest, while Emma Hipps, Alayna Winters and Taylor Hudson scored two each and McKenna Lanager, Riley Ryen, Kira Knox, Emily McCracken and Megan Hamm had one each.

Julianna Wilson added an assist for the Lady Cats.

Emma Dailey notched two goals and an assist for KC, while Rossi McMillen had the other goal.

Lyrik Reed added two assists for the Lady Gremlins and Abby Callihan, Addy Christie and Cece Morrow one each.

Cody Whitling, Thomas Uckert and Nate Mengin had the other goals for C-L.

Notching assists for the Lions were Wyatt Borden with four and Carter Brown and Layton Dunn one each.

Lathan Price added the other goal for the Gremlins, while Luke Yasika had the clean sheet in net.

Everett Osborne had the other goal for North East.

Johnson also added a pair of assists, while Chris Morphy and Luke Trocki also found the back of the net.

Ethan Baker and Tyler Chermack combined on the shutout in net.

Gage Hainwalt had the other Franklin goal.

Nathan Feltmeyer and Cam Espeso scored for the Bison.

SHARON, Pa. – Grove City got three goals from Jimmy Irani in a 9-0 win over Sharon.

Blum and Ordiway also had two assists each.

HERMITAGE, Pa. – Lukas Jones scored the game-winner in overtime to lift Hickory to a 2-1 win over Greenville.

Jones had both goals in the game for Hickory.

Sept. 28, 2021 Volleyball Schedule
Sept. 27, 2021 VB: Keystone Beats Redbank Valley in Rematch of 2020 D9 2A Title Match; Union Outlasts Oil City; St. Marys, Villa Maria, Fort LeBoeuf Get Wins
This website or its third-party tools process personal data.In case of sale of your personal information, you may opt out by using the link Do not sell my personal information.
×
Manage consent