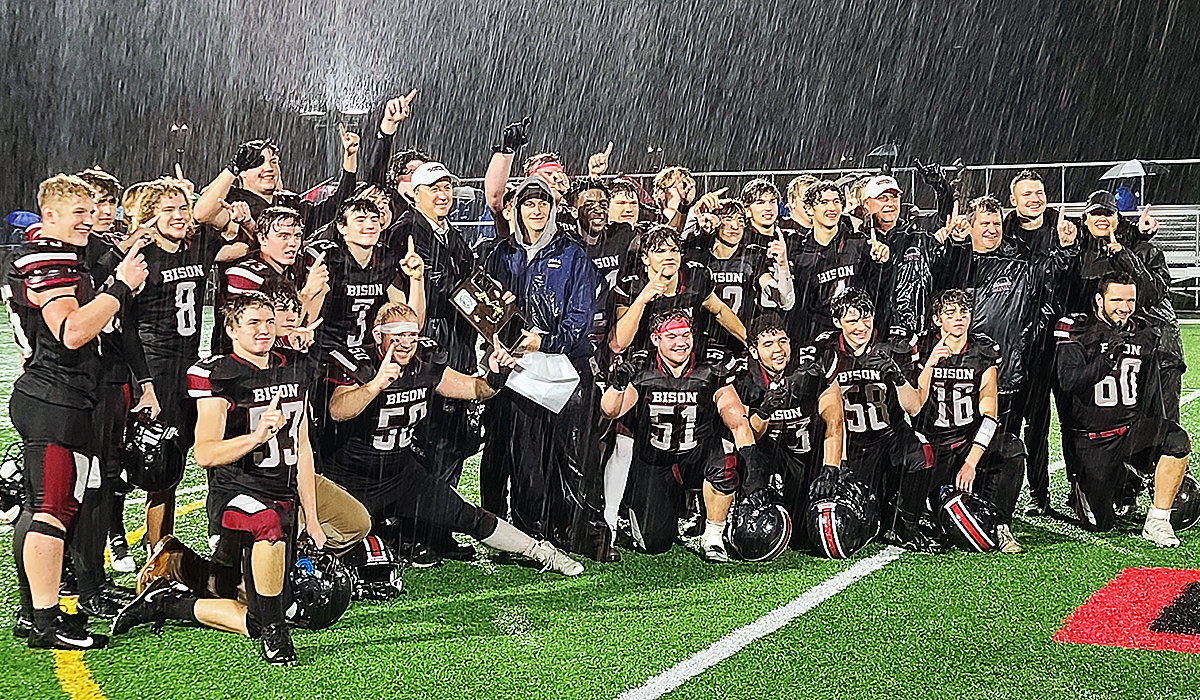 BROCKWAY, Pa. – Isaac Putt’s interception in the corner of the end zone with just over 20 seconds remaining sealed a 13-7 win for Clearfield over St. Marys in the District 9 Class 3A Championship.

Putt snagged Justin Dornisch’s halfback pass attempt as the Flying Dutch were facing 2nd and goal from the 8. The pass sailed over Collin Reitz’s fingertips and into Putt’s arms to end the game.

Isaac Putt comes up with the INT! pic.twitter.com/AhinoBy8Wd

The interception came two plays after the Bison were called for pass interference on a fourth down play with 35 seconds left in the game.

“We’ve just got to clear our mind and get (the) next play,” Clearfield’s Brady Collins said of the defensive mentality after the penalty.

It appeared early on that the steady rain, which left whether the game would be played Friday or Saturday in question until late Thursday, wasn’t going to impact the offense much as both teams scored on their first possession.

“We didn’t know if (the game) was going to be tonight or Saturday,” Collins said. “It was tonight and we played. It was fun.”

Collins capped off a nearly 4-minute opening drive with a 14-yard touchdown run to put the Bison on the board. St. Marys blocked the PAT to limit the lead to 6-0.

St. Marys answered with a 4-minute drive of its own, where quarterback Charlie Coudriet went 5-5 passing, and Coudriet finished it with a 3-yard TD pass to Carter Chadsey. Gianna Surra’s PAT was good, which gave the Flying Dutch a 7-6 advantage.

Clearfield methodically worked its way back down the field and Carter Chamberlain ended the drive with a 1-yard scoring plunge. Evan Davis ended the scoring for the night with a PAT to make it 13-7.

Facing a fourth down near midfield, St. Marys elected to have Coudriet try a fake punt. The Bison sniffed it out immediately and dropped Coudriet for a 10-yard loss to take over on downs inside Flying Dutch territory.

The Bison had a third and short from just outside the St. Marys 10 with 2:30 to play in the half. Jacob Samsel, who made the start at quarterback for the injured Will Domico, had the shotgun snap sail over his head. Samsel’s diving attempt to cover the ball missed as he went past the ball on the rain-soaked turf.

A pair of St. Marys defenders, who would have had a wide-open field in front of them, were unable to take advantage as an inadvertent whistle blew the play dead.

An incompletion on fourth down, Clearfield’s only pass attempt of the game, turned the ball over to St. Marys.

“It (the offensive game plan) was going to be leaning run heavy, even if it wasn’t raining, but the rain made it only run,” Collins said.

The Flying Dutch marched down the field and a 28-yard pass from Coudriet to Logan Mosier had them set up with a first and goal from the 8. The Bison defense stopped Dornisch on first down, and Collins had a big pass breakup in the end zone on second down.

Coudriet overthrew an open Mosier on third down and underthrew the intended receiver on fourth down to give the ball back to Clearfield with 30 seconds to play in the half.

Neither team was able to get much going offensively in the second half, though St. Marys did drive into the red zone late in the third quarter. A quick pass to Mosier on 4th-and-1 at the Bison 18 was stopped for a 1-yard loss and a turnover on downs.

The Flying Dutch were trying to capitalize on a fumble recovery, surprisingly the only turnover of the game until Putt’s INT, on their final drive.

The rain wasn’t enough to deter St. Marys from its pass-heavy attack. Coudriet threw 30 times, completing 13 for 166 yards and a touchdown. Mosier had seven catches for 100 yards and Chadsey had four grabs for 46 yards and the score. Matthew Davis led the rushing attack with 12 carries for 37 yards.

Clearfield will take on the District 6 champion, either Penn Cambria or Central-Martinsburg (D6 championship set for Saturday at 7 p.m.) next week at a date, time, and location to be announced, with the winner to face the District 10 champion (either Grove City or Slippery Rock) in the PIAA quarterfinals.