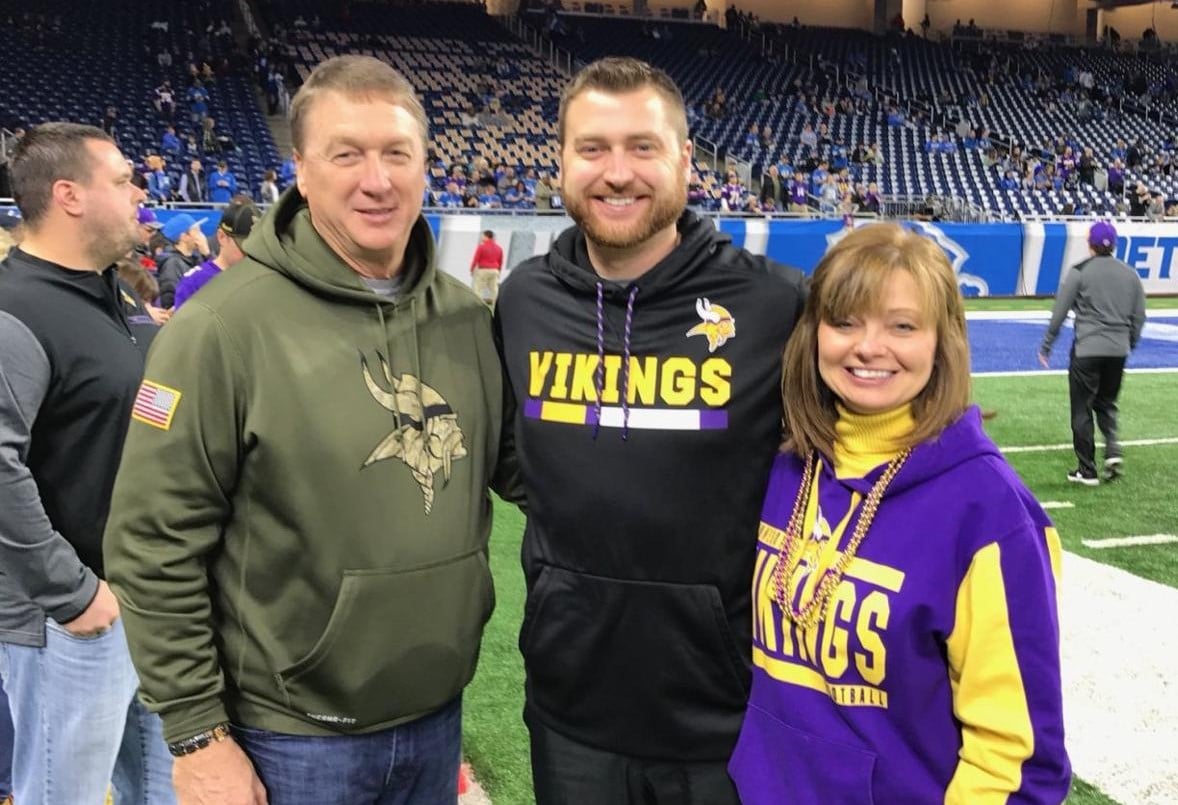 Andrew Janocko (Center) with his dad and Clearfield head coach, Tim Janocko (left), and his mom, Trina Janocko (right), before a Vikings game a couple of seasons ago. Submitted photo

MINNEAPOLIS – Andrew Janocko, a 2007 graduate of Clearfield High School, is the new quarterbacks coach for the Minnesota Vikings.

Janocko has been on the staff of head coach Mike Zimmer since 2015 and served this past season as the Vikings wide receivers coach.

“I am very blessed to stand here again in a different role,” Janocko said during a media conference announcing the move. “(I am) excited to build on my relationships with the positions groups I have worked with in the past and the different players on offense and go to a new room. I hope to help the organization in any way I can.”

Janocko originally joined the Vikings in 2015 as an offensive quality control coach, a role he held for two seasons under Head Coach Mike Zimmer. In 2017, he served as the assistant offensive line coach to Tony Sparano, who tragically passed away in July 2018. Janocko stepped into a role as co-offensive line coach in 2018 and the following season moved back to an assistant with the position group.

A 2011 graduate of Pitt, Janocko was a backup quarterback for the Panthers and also spent time as Pitt’s holder for placekicks. He was a star quarterback at Clearfield for his dad, current and longtime Clearfield head coach Tim Janocko, who is the winningest coach in District 9 history.

“It’s exciting,” Janocko said of getting to work with the Vikings quarterbacks. “It’s a new opportunity. It’s getting back to a position that I played growing up and then my college experience and coached it at the Division II level. So, it is exciting to go back to that world and get back to that familiar place.”

The 2021 season will be Janocko’s ninth in the NFL, as he served two seasons (2012-2013) as an offensive assistant with the Tampa Bay Buccaneers. While in Tampa Bay, Janocko was responsible for working with then-Head Coach Greg Schiano and Offensive Coordinator Mike Sullivan in coordinating practice schedules and breaking down film. In 2012, Janocko had a hands-on role with the quarterbacks and kick returners before working with WRs and KRs in 2013.

He came to Minnesota in 2015 after serving as the quarterbacks coach at Mercyhurst in 2014. In his one season as the wide receivers coach this past year, he was instrumental in the development of Justin Jefferson into one of the top receivers in the league as a rookie.

Janocko helped Clearfield to a pair of District 9 titles while at Clearfield.

Gould Leaves A Lasting Legacy As Conneaut Football Coach
Life Comes Full Circle for Greg Heath and Jason Say with Say on Keystone’s Bench and His Son Playing for Heath
This website or its third-party tools process personal data.In case of sale of your personal information, you may opt out by using the link Do not sell my personal information.
×
Manage consent