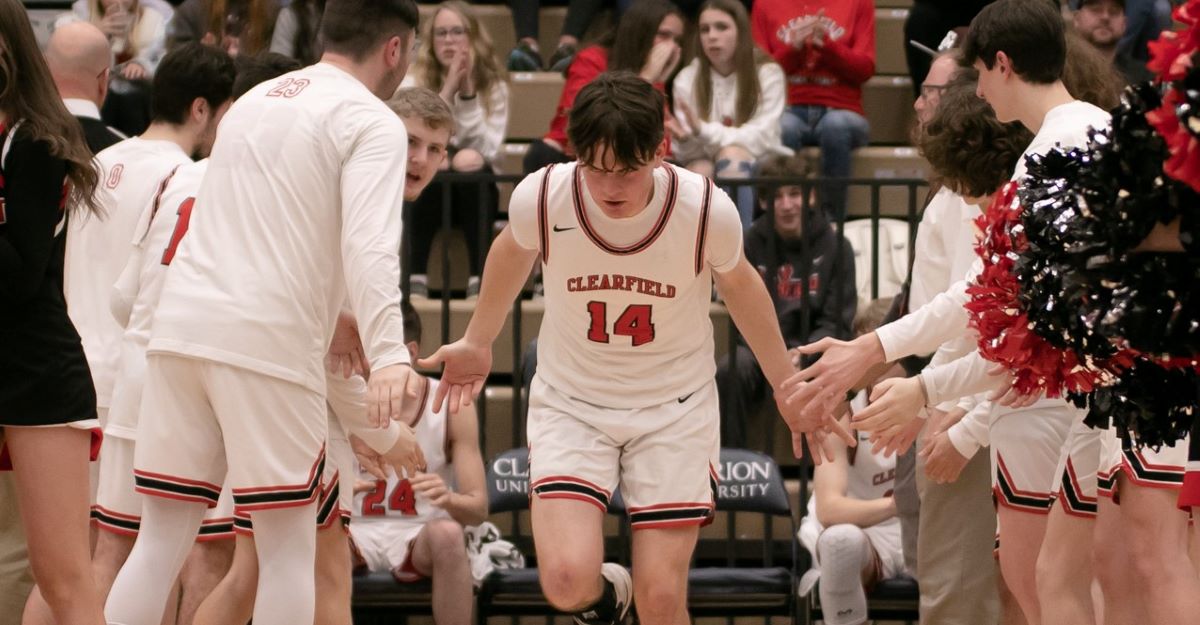 BELLEFONTE, Pa. – Clearfield rallied from a four-point deficit heading to the fourth quarter to force overtime and then outscored Bellefonte by three in the extra session to get a 46-43 Mountain League victory.

The Bison were down 27-23 going to the fourth quarter but tied the game at 35 at the end of regulation thanks to 3-pointers from Andon Greslick, Morgen Billotte, and Anthony Lopez and three Cole Miller free throws.

Clearfield had a chance to win the game in regulation but a 3-pointer at the horn was off the mark.

But in overtime, the Bison got triples from Grelick and Billotte, who also hit two free throws in the extra session, a charity shot from Braison Patrick, and a bucket from Miller to build a five-point lead, 46-41, before Bellefonte got a meaningless basket at the buzzer.

The five 3-pointers in the fourth quarter and overtime combined accounted for all but one of the triples made by Clearfield in the game.

Miller led a balanced attack with 15 points while adding nine rebounds with Greslick chipping in 12 points, and Billotte and Patrick eight each. Billotte also had five rebounds and three assists.

That offset a huge night from Cole Crissman who led Bellefonte with a game-high 27 points including going 11 of 12 from the free-throw line. The one miss was a crucial one in the fourth quarter, although he rebounded to hit his final seven charity shots after the miss (4 of 4 in overtime).

FOXBURG, Pa. – A strong start helped A-C Valley get back in the win column with a 50-48 win over visiting Cranberry.

The Falcons came out strong building a 17-9 lead at the end of the first quarter thanks to six points from Jay Clover and long balls from Ryan Cooper and Lane Bauer.

Cranberry played the game even after that getting back within two, 28-26, by halftime thanks to a strong second quarter from Seth Schwab, who scored five points in the frame (Schwab also hit a pair of 3-pointers in the first quarter on his way to 13 points).

The A-C Valley lead got to three, 36-33, by the end of the third quarter, and the Falcons led by five until Ethan Merryman hit the second of two fourth-quarter 3-pointers from Cranberry at the final horn.

Clover had a game-high 17 points for A-C Valley with Alex Preston adding 10 tallies. Cooper chipped in with eight points, and Bauer had seven.

Merryman led Cranberry with 15 points, including seven in the fourth quarter.

CLARION, Pa. – Trailing by one at halftime, Clarion outscored visiting Moniteau 28-20 in the second half to get a 48-41 win.

The Bobcats, who lost by two at Moniteau just before Christmas, took the lead in the third quarter thanks to a 15-11 edge in the quarter with Gabe Simko scoring six points.

Clarion then continued to pull away in the fourth quarter with Devon Lauer leading the charge with eight of his 10 points coming in the final eight minutes including a 4-for-4 performance from the line.

RIMERSBURG, Pa. – Down one going to the fourth quarter, Keystone turned to Drew Keth and Kyle Nellis to rally the Panthers to a 52-44 win at Union.

Keystone trailed 32-31 going to the final eight minutes before Nellis scored eight points and Keth hit a pair of 3-pointers to turn the game around.

Cole Henry also had seven points and 10 rebounds in the victory.

Fleming led the Golden Tide with 16 points with English adding 11.

Alex Carlson and Aiden Grieneisen each had eight points for Brockway.

The Lions led 17-11 at the end of a quarter before opening up a 42-18 halftime lead with Jordan Hesdon scoring seven of his team-high 17 points in the second frame.

Funk had an all-around strong game for the Gators leading his team in scoring with 16 points while adding five rebounds, four steals, and four blocked shots.

GALETON, Pa. – Getting 17 points, four rebounds, two assists, and two steals from Austin Cousins, Otto-Eldred made a successful trip to Galeton with a 57-33 win over the Tigers.

John Martin had 13 points for Galeton.

SHINGLEHOUSE, Pa. – Coudersport played the role of a rude guest beating Oswayo Valley, 67-54, behind a strong double-double of 17 points and 15 rebounds from Reilly Steich.

TIONESTA, Pa. – Mason Clouse scored 18 of his game-high 22 points in the first half in a 91-11 Redbank Valley rout of Forest Area at West Forest.

Owen Clouse and Braylon Wagner then each drilled a pair of third-quarter 3-pointers, as Redbank Valley hit five triples in the second half.

Kieran Fricko also scored 11 points in the win for the Bulldogs with Matthe Kozma scoring 12 of his 14 points in the fourth quarter.