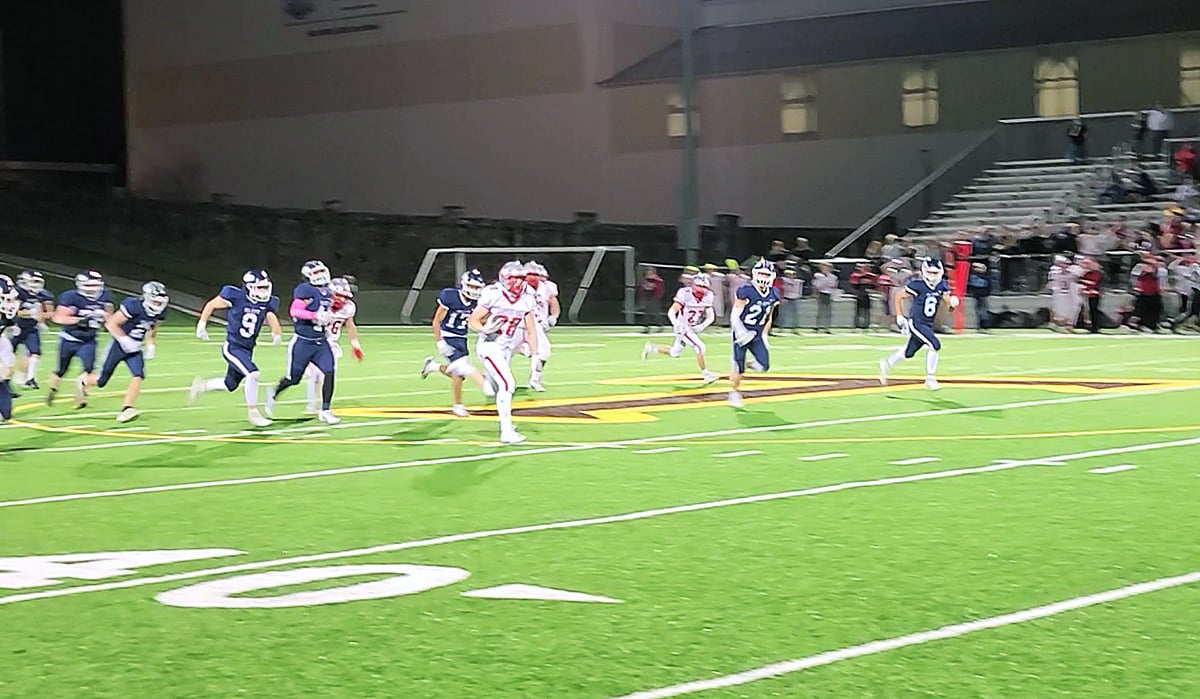 Slippery Rock's Maddox Allen breaks away from the defense for a 64-yard touchdown on the first play from scrimmage. Photo by Brian Hagberg.

It was a clean sweep for the southern teams in the District 10 Class 3A quarterfinals Friday night as Grove City, Sharon, Slippery Rock, and Hickory all came out victorious.

Those four move on to next week’s semifinals where Grove City will face Sharon and Hickory will meet Slippery Rock. The dates, times, and locations will be announced later.

Let’s get into the action,

ALLEN, ROCKETS RACE PAST OILERS
TITUSVILLE, Pa. – Slippery Rock came into its quarterfinal with a game plan and executed it perfectly en route to a 41-28 win over Oil City.

The 6th-seeded Rockets wasted little time opening the scoring as Maddox Allen took a handoff on the first play from scrimmage and raced 64 yards to paydirt to give Slippery Rock a 7-0 lead just 16 seconds into the game.

And just like that, Rockets are on the board pic.twitter.com/7wyUPV0xGr

“It’s huge to start off the game like that,” Maddox said. “I just got the ball, had an opening and made sure I made it there.”

Slippery Rock recovered the subsequent onside kick, something coach Larry Wendereusz said was part of the plan coming into the game, and a few plays later, William Mokel connected with Sal Mineo on a 24-yard screen pass to give the Rockets a 14-0 lead with 9:55 to go in the first quarter.

“Our thought was we gotta get them off-balance defensively and we did that out the gate,” Wendereusz said. “We told our guys all week that after our first score, we’re running the onside kick. I don’t even have to call it, we’re going to run it. It worked out to get us up 14 in a hurry.”

After forcing an Oil City punt, Slippery Rock went right back down the field and a 29-yard Nick Kingerski field goal gave the Rockets a 17-0 lead with a little over a minute to play in the first quarter.

Oil City running back Ethen Knox was bottled up on the Oilers’ first possession of the game, he needed just one play to get loose on the second possession.

Knox took a handoff to the left side, shook a would-be tackler, and outran the defense for an 80-yard touchdown to get the Oilers on the board.

The Rockets and Allen had the answer though as Allen broke through the defense and sprinted to the end zone for a 31-yard touchdown that put Slippery Rock in front, 24-6, with 8:49 to play in the first half.

“Our oline did a great job,” Wendereusz said. “Maddox did a tremendous job finding the holes and making his cuts, and ‘Zip’ had some nice runs on the edge. So you know, we got ourselves in some good angles to be able to run the ball outside. And then once you do that, you can get your power game inside.”

Not to be outdone, Knox started right, made a jump-cut back to the left, and found a gaping hole with an open lane for an 86-yard score.

Allen responded with a 43-yard scamper for his third touchdown of the half and the Rockets had a 31-12 advantage with just under seven minutes to play in the half.

The Oilers worked their way down the field chewing up yards, and clock, on a 10-play drive capped by a Knox 14-yard touchdown run. Knox ran in the subsequent conversion to cut the deficit to 31-20.

With 31s left in the half, @KnoxEthen goes 14 yards on this pitch, then runs in the conversion. @SRAHSFootball leads 31-20 pic.twitter.com/bnzomf0y2h

The Rockets showed their quick-strike capability as they went right down the field and got in position for Kingerski to kick his second FG of the half. This one from 34 yards to put Slippery Rock up 34-20 at the half.

After forcing a punt to start the second half, the Rockets took over inside Oilers territory, but Oil City’s defense held and Kingerski missed from 35 yards to keep it a 2-score game.

Oil City again marched methodically down the field. Knox plunged in from two yards out with 29 seconds left in the third quarter to cut the lead to 34-28.

The Oilers were unable to execute on an onside kick attempt and the Rockets took over on their own 42. After catching a 35-yard pass, Brett Galcik took a handoff up the middle and into the end zone to restore the 2-score lead.

Quick response from the Rockets. Galcik with this 7-yd run after he caught a 35-yd pass. Slippery Rock leads Oil City 41-28, 11:20 4Q pic.twitter.com/Zc6KijqZXQ

After trading defensive stops, Oil City got the ball back with a little more than five minutes to play. The Oilers again began slowly working their way down the field but found themselves facing a fourth-and-12 from the Slippery Rock 44.

Dane Ley rolled to his left, avoided some pressure, and threw a pass for Gavin Stephens. Allen stepped in front of the throw and picked it off to seal the win.

Knox was impressive again, racking up 354 yards on 41 carries with four touchdowns and a pair of conversions. Ley ran twice for 25 yards and was 1-7 passing for five yards with the interception.

Allen was impressive in his own right, rushing 15 times for 195 yards and three scores.

“I was just staying patient, waiting for the online to block,” Allen said.

Mokel was 12-24 through the air for 160 yards and a TD. Galcik led the receiving corps with three grabs for 66 yards.

FARRELL, Pa. – Grove City’s Hunter Hohman put on a show as Grove City began its District 10 Class 3A title defense with a 35-21 win over Fairview.

The No. 8 seed Tigers hung tough, but Hohman accounted for five total touchdowns (3 rushing, 2 receiving) and nearly 300 yards of total offense in the win for the top-seed Eagles.

Fairview didn’t let the game get away from them, however, as Tyler Corbin connected with Jeremy Frazao on a 25-yard touchdown pass with just over a minute left in the first half to make it 21-7.

Fairview twice made it one score game in the second half, including on Charlie Chevalier’s 5-yard touchdown run with 7:35 to go in the third quarter.

Hohman responded on the ensuing GC possession, capping off a long drive with a 1-yard touchdown run with 3:35 to go in the third quarter to make it 28-14.

With 7:32 to play in regulation, Chevalier scored his second touchdown of the game, this one from 1-yard out to make it 28-21.

Hohman, however, put the game out of reach with his 21-yard touchdown pass to Clayton Martin with 2:52 to play.

Corbin had 100 yards passing and 73 rushing, while Chevalier had 60 rushing yards for the Tigers.

With the win, Grove City advances to play No. 5 seed Sharon in the semifinals. The two teams met in the regular season, a 41-25 Grove City victory.

It was a game in which No. 5 Sharon trailed 10-7 in the waning moments of the first half when Mikey Rodriques connected with Bishop Root on a 29-yard touchdown pass as time expired, giving the Tigers a 14-10 lead.

It was a lead they didn’t relinquish, although No. 4 LeBoeuf did come back and tie the game.

Sharon extended the lead to eight, 21-13 on Jayveerh White’s 15-yard touchdown run with 9:28 to go in the fourth quarter. White finished with 115 yards on the ground.

Fort LeBoeuf took the ensuing drive and marched right down the field, with McGuire’s 2-yard touchdown run, his second of the game, coupled with Justin Leuschen’s two-point conversion run tied the game with 6:43 to go, setting up the late game dramatics from Friday.

LeBoeuf had a chance at the end of the game, but a fourth-down snap actually went awry, sealing the deal for Sharon.

Rodriques had a 6-yard touchdown run and McGuire a 1-yard plunge in the first quarter.

Rodriques finished with 115 yards through the air and 55 on the ground for the Tigers.

For LeBoeuf, Leuschen had 69 yards rushing.

EDINBORO, Pa. – A pair of Logan Woods touchdown passes – one passing and one rushing in the fourth quarter helped break open a tight game and lift No. 7 Hickory to a 33-28 win over No. 2 General McLane.

With Hickory leading 21-14, Wood connected with Luke Nevil on a 16-yard touchdown pass (Nevil’s third score of the game) with 11:03 remaining in the game.

Woods’ 8-yard touchdown run with 4:53 to go made it 33-14 and essentially put the game out of reach, but not before General McLane tried to rally.

Owen Martin scored on a 7-yard touchdown run with 3:14 to play. GM was able to force a punt and get the ball back with under a minute to play, driving for another score courtesy of a Dylan Sheeder 6-yard touchdown pass to Kyle Cousins to make it 33-28.

Hickory recovered the ensuing onside kick, however, to preserve the win.

Woods and Nevil got the scoring going for Hickory late in the first quarter on a 26-yard pitch and catch, and Zander Telesz’s 30-yard touchdown strike to Ty Holland made it 14-0 Hornets in the second quarter.

GM scored with a minute to play in the first half to trim the margin in half, as Sheeder connected with Cousins for a 36-yard scoring strike.

Nevil’s 17-yard touchdown reception from Woods made it 21-7 at the midway point of the third quarter, but the Lancers responded on the second of Sheeder’s three touchdown passes, a 29-yarder to Landon Laskey.

Woods finished with 275 yards through the air and 66 yards rushing, while Keenan Scullin and Nevil both had 105 yards receiving.