Class 3A, 2A and 1A Teams Gear up for D10 FB Semifinals; McDowell, Meadville Head Into Subregional Play 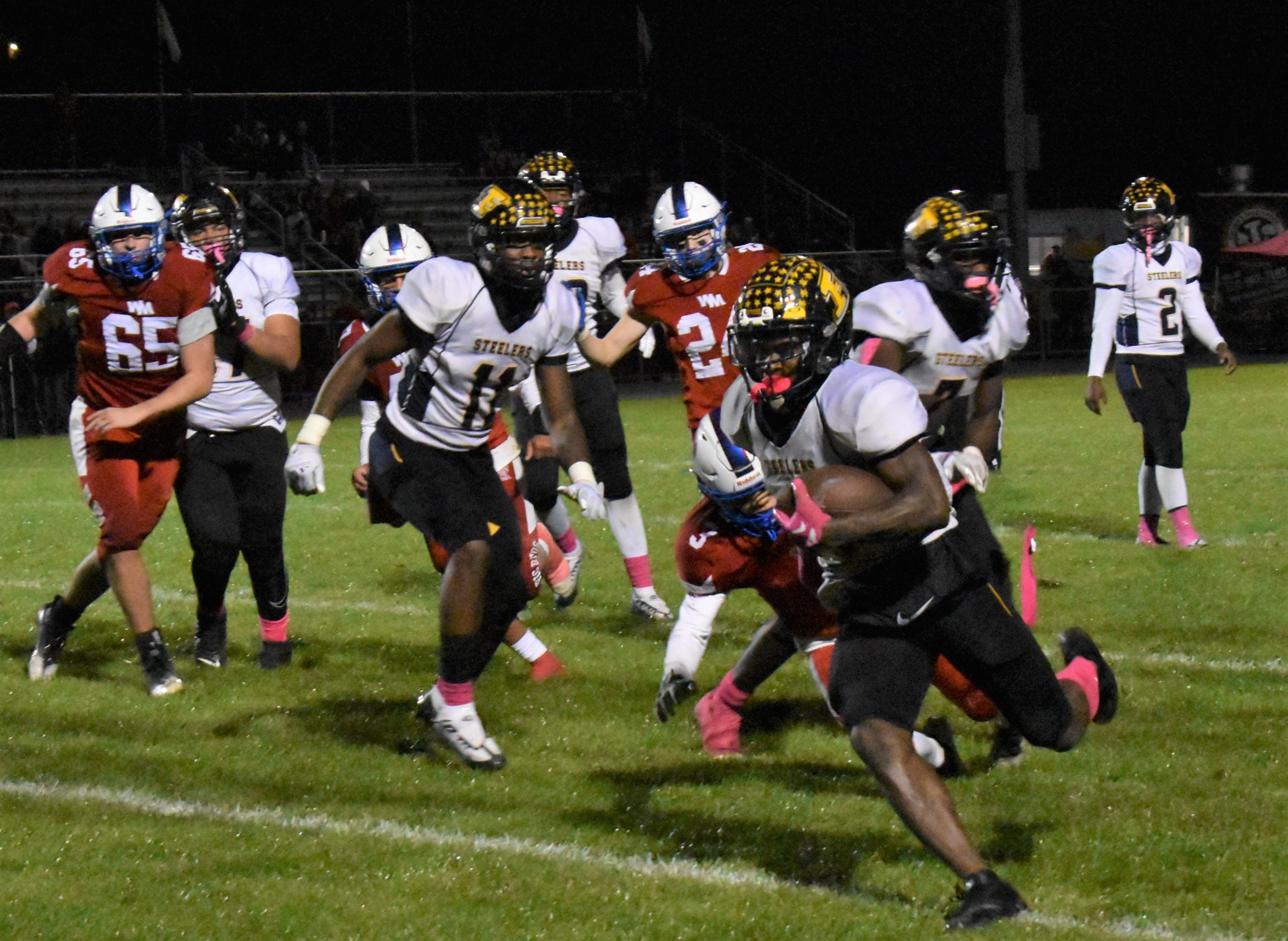 It’s semifinal weekend for Class 1A, 2A and 3A football teams, while class 4A champion Meadville and 6A champion McDowell enters subregional play.

All four teams in the southern part of District 10 won their quarterfinal matchups in Class 3A, while in Class 2A and 1A, top seeds Farrell, Sharpsville, Eisenhower, and Reynolds take the field after opening-round byes.

The two 3A semifinal games, as well as McDowell’s subregional with Allderdice, are Friday, while all other action is on Saturday.

Defending District 10 champion Grove City (7-3) squares off with No. 5 Sharon (6-4) in the semifinals, with both teams earning hard-fought wins last week – Grove City 35-21 over Fairview and Sharon 28-21 over Fort LeBoeuf on Isaac Friday’s late touchdown run with under two minutes to play.

Grove City’s Hunter Hohman came up big in the win over Fairview, accounting for five total touchdowns (two passing, three rushing), throwing for 198 yards and rushing for 85. On the season, Hohman has thrown for 1,555 yards and rushed for 404.

Sharon quarterback Mikey Rodriques, meanwhile, threw for 103 yards and ran for 85, rushing and passing for one touchdown each, while running back Jayveerh White had 121 yards and a touchdown on the ground. For the season, White has rushed for 1,198 yards and eight touchdowns, while Rodriques has 688 yards and 14 scores on the ground.

Grove City had two defensive touchdowns in the regular season meeting, a fumble return by Nathan Greer and a fourth-quarter interception return by Gavin Lutz.

These teams are no strangers to one another, especially in the semifinal round. This will be the third-consecutive meeting between the two in the semis, with Hickory (5-5) winning on its way to the D10 title in 2020 and Slippery Rock coming out on top a year ago.

The two teams met in the regular season, a 23-20 win for Slippery Rock (6-4) in which Nick Kingerski kicked a game-winning 30-yard field goal with just over one minute to play.

Both teams are coming off impressive quarterfinal wins – Slippery Rock 41-28 over Oil City and Hickory 33-28 over General McLane. Slippery Rock jumped out to a 31-12 lead in their game, while Hickory at one point led GM 33-14.

For Slippery Rock, Maddox Allen had a big game on the ground in the win over OC, rushing for 191 yards and three touchdowns, scoring on touchdown runs of 64, 31 and 42 yards.

Hickory, meanwhile, used its passing game en route to its quarterfinal win. Quarterback Logan Woods threw for 276 yards and three touchdowns, while Zander Telesz also threw for a touchdown. Luke Nevil caught three of those touchdowns and accounted for 105 yards, while Keenan Scullin had 131 yards receiving.

On the season, Scullin has 576 yards receiving and Nevil 506.

For Slippery Rock, quarterback William Mokel has thrown for 1,889 yards and 17 touchdowns, while John Sabo leads the offense with 42 receptions for 598 yards and Sam Schwartz has 27 receptions.

In the win over Butler, Artis Simmons ran for 110 yards and three touchdowns, as five different Trojans found the end zone on the ground.

Quarterback Ben Moore, as well as Bobby Blue, Blayze Myers and Stephon Porter scored on the ground as well, with Porter also returning the second-half kickoff for a touchdown.

Christian Santiago had two tackles for loss and a sack in the win.

In the 27-13 win last season for the Trojans, they trailed 7-3 at halftime before a pair of third-quarter touchdown runs by Simmons.

Noah Johnston and Cornell Weems had touchdowns in the game for the Dragons, who are coming off a 40-8 loss to Westinghouse in the City League title game.

Two programs that couldn’t be more different, as Farrell (8-1) is looking to advance to a D10 title game for the eighth straight season, while Seneca (9-2) is coming off its first playoff win in program history last week, 46-13 over Northwestern (Farrell had a bye).

The last time the Steelers took the field was a 41-0 win over Slippery Rock in its regular-season finale on Oct. 21.

Farrell has dominated opponents this season, with all of their wins coming by at least 29 points.

The offensive attack for the Steelers is incredibly balanced. Junior quarterback Kabron Smith has thrown for 1,648 yards and 18 touchdowns (to just four interceptions). Kylon Wilson, meanwhile, is a threat to score every time he touches the ball. Wilson has accounted for 825 yards receiving, 516 yards rushing and 26 total touchdowns. Lamont Samuels, meanwhile, has 24 receptions for 400 yards.

On the ground, Brandon Chambers has rushed for 766 yards and seven touchdowns.

Seneca’s offense has also been potent this season, led by running back Ryan Miller, who has rushed for 2,388 yards and 33 touchdowns, including 289 in the win over Northwestern.

Junior quarterback Nolan Seabury has thrown for 1,055 yards and 12 touchdowns and has also run for 888 yards and 16 touchdowns. Miller also leads the Seneca defense with 125 tackles.

Malachi Owens has 7.5 sacks and Marion Norris has 93 tackles to lead the Farrell defense.

Sharpsville (8-2) is coming off a bye, while Mercyhurst Prep (7-4) earned a thrilling 21-14 win over Wilmington in quarterfinal action last week.

Summers has thrown for 2,035 yards and 22 touchdowns and has also rushed for 758 yards and 10 touchdowns.

Garen Levis has been one of the best receivers in District 10 this season for Sharpsville with 1,079 yards and 12 touchdowns, averaging over 20 yards per reception. Bradedon Summers also has 25 receptions for 262 yards and Dalton Byerly 20 receptions for 246 yards.

Summers has also rushed for 295 yards and six touchdowns.

Defensively, Summers and Kalvin McCullough have five interceptions each, while Christian Snyder has amassed 133 tackles.

For Mercyhurst, Ja’son Ellman has 837 yards and 11 touchdowns receiving, while Jeremy Ganska has rushed for 584 yards and seven touchdowns.

Eisenhower was the only District 10 team to go unbeaten in the regular season, finishing 10-0 after a hard-fought 13-7 win over Girard. The Knights are coming off a bye, while Cambridge Springs (8-3) earned a 21-14 win over Mercer in the quarterfinals last week.

For Eisenhower offensively, Benji Bauer broke the single-season rushing record and sits at 1,751 yards and 21 touchdowns for the season. Tucker Lindell (548 yards) and Keegan Eckstrom (365 yards) both have four touchdowns on the ground each.

Shawn Pascuzzi has thrown for 994 yards for the Knights. Top pass-catcher Wyatt Lookenhouse is out but, look for Kris Bunk (291 yards, 2 touchdowns) and Keegan Eckstrom (3 touchdowns) to play key roles in the passing game.

Lindell leads the defense with 64 total tackles, while Pascuzzi has notched five interceptions (the Knights have 14 as a team).

Cambridge Springs built a 21-0 lead and held off Mercer 21-14 last week. In that game, freshman Brett Kania rushed for 95 yards and a pair of touchdowns. On the season, Kania has 687 yards and six touchdowns, while Van Jones has 847 yards and nine touchdowns.

The two teams met way back on Sept. 2, a 27-14 Eisenhower win. In that game, Bauer ran for 179 yards and two touchdowns, while Applebee threw for 145 yards and a pair of scores.

Reynolds (9-1) comes in off a first-round bye, while Maplewood (5-6) earned a surprising 33-24 win over No. 3 Lakeview in the quarterfinals.

Reynolds beat Maplewood in the regular season, 64-0 on Sept. 23, a game in which Jalen Wagner broke the Mercer County single-game rushing record with 393 yards and eight touchdowns.

On the season, Wagner has rushed for 2,268 yards and 32 touchdowns, including 216 yards in an overtime win over North East to close the regular season.

Reynolds quarterback Brayden McCloskey has thrown for 1,451 yards and 13 touchdowns, with 685 of those yards and eight scores going to Haydin McLaughlin.

For Maplewood, their offense starts with senior running back Ben Gilberto. Gilberto ran for 215 yards and four touchdowns in the win over Lakeview and now has 1,888 yards on the season.

Ethan Peterson and A.J. Proper had a pair of interceptions each for the Tigers in the win over Lakeview.

Meadville (10-1) let Corry hang around in last week’s D10 4A title game before rattling off 31 unanswered points in a 62-14 win for their second consecutive title.

In that game, Kahlon Simmons rushed for four touchdowns and 200 yards, while also adding a passing touchdown and punt return touchdown. Brady Walker was also over 100 yards rushing and had a pair of touchdowns.

Defensively, the Bulldogs have allowed single digits in eight of their games, including four shutouts. Walker leads the way with 72 tackles and nine sacks, with Brighton Anderson accounting for six of the Bulldogs’ 17 interceptions.

USO’s (3-5) last game was a 14-6 loss to Allderdice in the City League semifinals, a game in which they were held to -9 yards rushing. USO does own wins over Brashear, Carrick, and Perry this season.

Title time: Central Clarion, Brookville meet in D9 Class 2A final Saturday
JB Graphics Fan Pic(k) of the Week – You Pick the Winners in Week 12 2022
This website or its third-party tools process personal data.In case of sale of your personal information, you may opt out by using the link Do not sell my personal information.
×
Manage consent