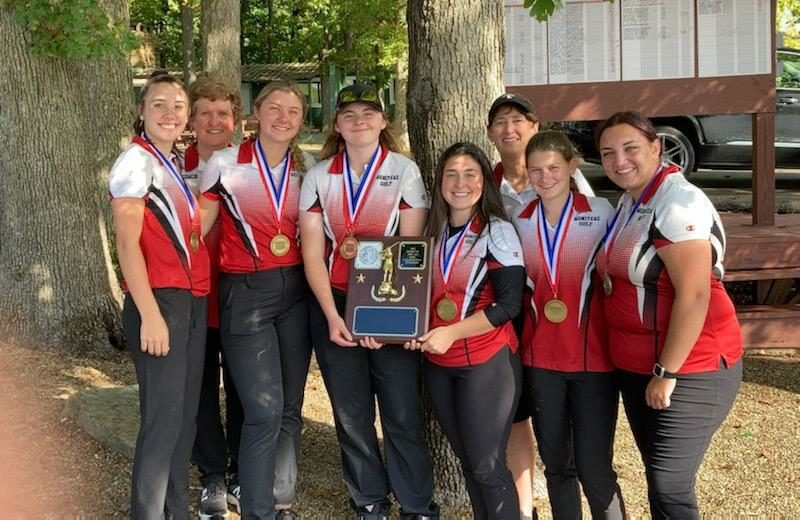 The Moniteau girls captured the District 9 Class 2A golf title on Monday.

Kerle shot an 80, besting Chloe Fritch of Karns City (88) by eight strokes in Class 2A. District 9 takes two golfers to states from Class 2A, and those golfers will be joined by Moniteau’s Emma Covert, who shot a 96, one stroke better than Maeve Hanley of Punxsutawney.

In the Class 3A individual event, Henninger shot an even 100, besting Bradford’s Cadence Stiles (104) by four strokes. Stiles finished one stroke better than DuBois’ Alexis Pfeuffer to earn second and a trip to states.

The Class 2A team title was as razor-thin as could be, with Moniteau’s Covert, Brynne Barger (104) and Autumn Stewart (114) shooting a combined 314, one shot better than the Punxsutawney trio of Hanley, Kiersten Riley (102) and Neveah Parente (116).

The Class 3A race wasn’t quite as close, with Henninger, Pfeuffer and Sophia Seduski (113) shooting a combined 318, and the Bradford trio of Stiles, Alexia Corignani (119) and Sophie Cornelius (127) shooting a 350.

The DuBois’ girls captured the Class 3A golf title on Monday.

The PIAA team subregionals will be held on Oct. 14 at Treasure Lake, with the PIAA team championships on Oct. 25. The Class 2A individual finals will be Oct. 18 and Class 3A on Oct. 19, all at Heritage Hills in York.

You Vote for the Volleyball Performance of the Week for Sept. 27-Oct. 2
Oct. 4, 2021 Soccer Scores
This website or its third-party tools process personal data.In case of sale of your personal information, you may opt out by using the link Do not sell my personal information.
×
Manage consent