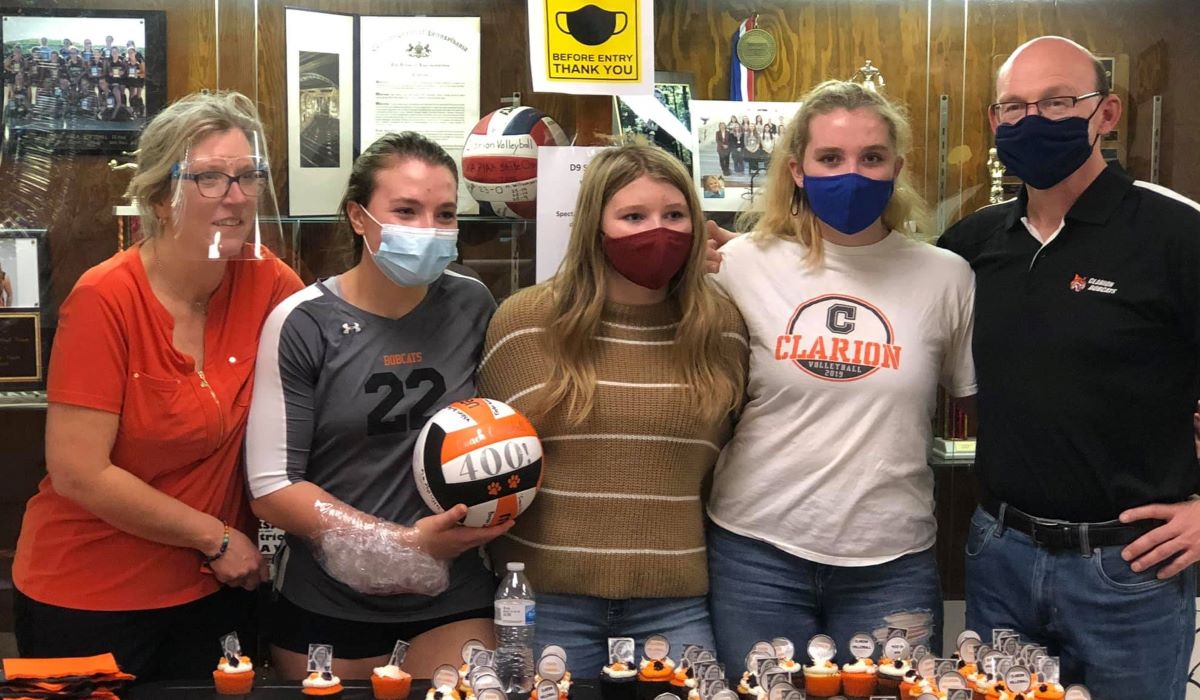 CLARION, Pa. – Shari Campbell has pretty much done it all in her 22 years at the helm of the Clarion Lady Cats volleyball program and her 25 years as a head coach including her three seasons at Clarion-Limestone.

And Thursday night, thanks to Clarion’s 3-0 win over Oswayo Valley in the District 9 Class 1A semifinals – Campbell reached another milestone.

And the best part?

She didn’t even know it.

“I didn’t even know it was 400 wins,” Campbell said. “I was very caught off guard. I don’t pay attention to that at all.”

Who did know was Campbell’s daughter and senior setter, Brenna Campbell, and the rest of Campbell’s family and friends (the crowd all held up 400 signs at the end of the match) including Pennsylvania State Representative Donna Oberlander, who was on hand to present a certificate of achievement from the State Legislature to Campbell after the victory.

Shari Campbell with daughter and Clarion setter Brenna after her 400th win. Photo by Nathan Girvan

Campbell said was stunned by the reaction.

“It brought tears to my eyes,” Campbell said. “I was like wow, wow, because I am not sure everybody pays attention. I don’t toot the horn I don’t even toot the girls’ horns. I toot the team’s horn and then the stuff that happens for the girls is a byproduct of the excellence that we demand.”

Campbell said she views coaching as her calling.

Campbell mentioned the support she has gotten from administration – both present – current Clarion superintendent Joe Carrico was in attendance Thursday night – and past – for the success of the program.

“I’m really honored to have had the opportunity and the support I have had with so many different administrators,” Campbell said. “I still get emails from past superintendents congratulating the team and myself on things, so it’s fun.”

Campbell has always been about the team concept and the team accomplishments, so taking the spotlight after the win was a little uncomfortable for her.

“I don’t like the limelight,” Campbell said. “I don’t ever take it much. This is not me. It will be alright. It will be fun, I guess.”

One thing Campbell was happy about was getting to enjoy the moment with Brenna, who immediately ran over to her mom to celebrate after the victory.

“It was extra special,” Campbell said of having Brenna be the starting setter in the match. “It was fun.”

Third Time a Charm: Lady Bulldogs Capture D9 Class 2A Volleyball Title
Kane Graduate Rudolph Named Big 12 Women’s XC Coach of the Year
This website or its third-party tools process personal data.In case of sale of your personal information, you may opt out by using the link Do not sell my personal information.
×
Manage consent