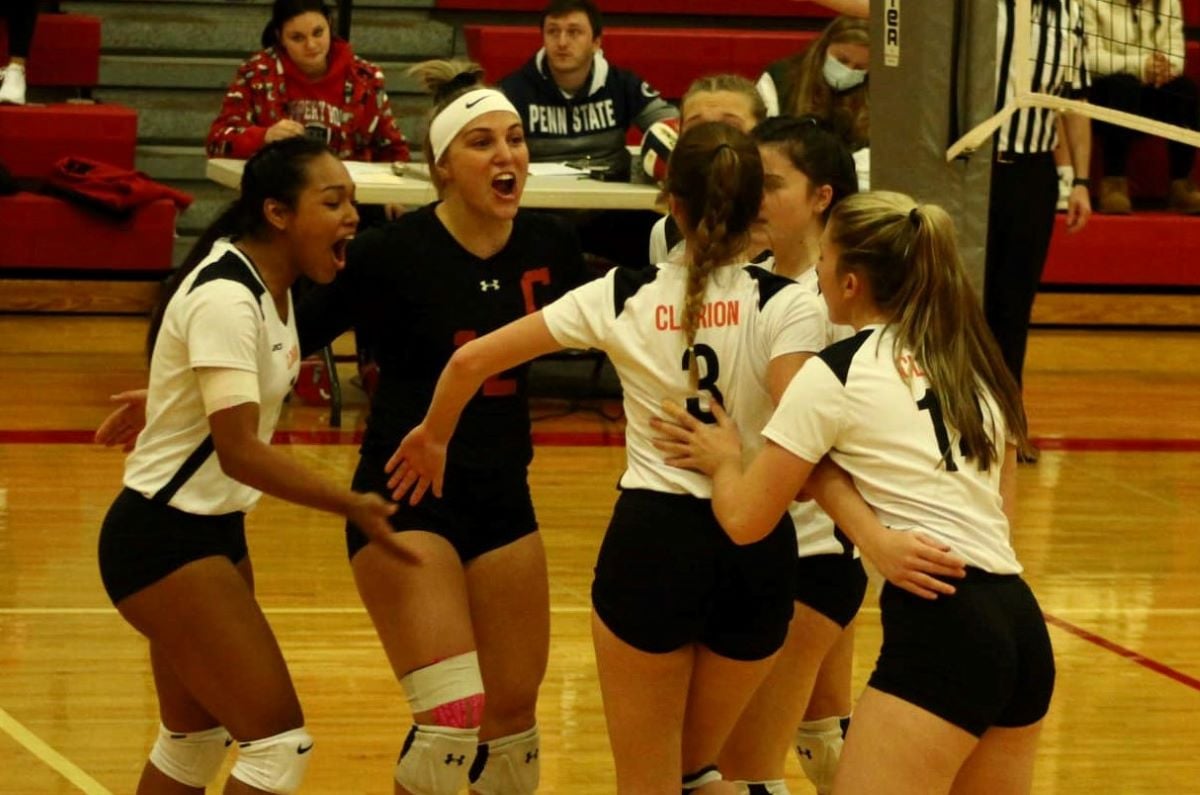 SLIPPERY ROCK, Pa. – For some schools getting to the PIAA semifinals in any sport is considered a big deal.

But at Clarion, it has become a habit in volleyball.

The District 9 champion Lady Cats (19-0) will be making their third consecutive appearance in the PIAA Class 1A semifinals when they beat WPIAL champion Bishop Canevin (27-1) at 7 p.m. Tuesday, Nov. 16, at Slippery Rock High School. The game will be available as a video broadcast on D9and10sports.com

It is also the fourth trip in the last five years for Clarion, which beat Bishop Canevin, 3-0 (25-14, 25-15, 25-14) in last year’s semifinal match held at Bishop Canevin High School because of COVID-19 protocols, and the ninth overall trip to the PIAA semifinals for the Lady Cats, all since 2008 (Clarion is 4-4 in the first eight).

And with four returning starters from last year’s PIAA title-winning team, this was the expectation according to 23rd-year head coach Shari Campbell.

“We were expecting to be back,” Campbell said. “We knew we had some big shoes to fill in (setter) Brenna (Campbell) and (outside hitter) Erica (Selfridge), but the work that is done in the gym day in and day out, year after year, you see the kids who can make progress.”

“I had a lot of faith in them,” Campbell said.

Senior outside hitter Korrin Burns is the best of the group and perhaps the best in Class 1A in the entire Commonwealth.

A St. Francis (Pa.) commit, Burns enters the semifinal contest averaging 5.9 kills per set while recording 541 kills on the season and 1,590 in her career.

She has developed into an all-around player and also leads Clarion in digs with 209 (2.3 per set) and in aces with 54 while ranking second on the team with 22 blocks. She is hitting .342 on the season

Over the last month, Burns has developed a roll shot while also improving her tipping game to go with what has always defining hammer shot.

“You always want to see a player get to the level where they are in the air and see the ball, then see the block, and then see the court and are able to slow down time and process that and make choices in the air that are not just about taking a big swing but playing an entire team’s defense,” Campbell said. “It’s great to see her respond to that, and it certainly makes it very difficult to defend against her. She hit with great speed but also has a great tip and offspeed shot. That helps when she is in and out of system.”

Junior Aryana Girvan is a nice compliment to Burns.

Girvan, who was a right-side hitter on last year’s championship squad, is now the No. 2 outside hitter for the Lady Cats and has 191 kills (2.4 per set) while hitting .209. Girvan has added 70 digs and 13 blocks.

The emergence, or more fairly the reemergence, of senior Payton Simko has been another key for Clarion.

Simko, who moved from middle hitter last year to right-side hitter this year, has recorded 114 kills (1.2 per set) and a team-leading 23 blocks. She has come on strong in the postseason with 30 kills (2.0 per set).

“I am really pleased with the way she has risen up,” Campbell said. “We have seen her contribute to the offense, and I am excited to see how she plays (against Bishop Canevin). She was a big part of the energy and leadership we had in practice (Monday night). It is great to see kids gain confidence and step up each step of the way.”

Campbell said the play of Girvan and Simko as well as middle hitter Adia Needham (25 kills) and Taylor Alston (22 kills) help take the pressure off Burns.

“It just makes Korrin’s life a lot easier if she has a full complement of offensive players around her,” Campbell said. “It allows us to be completely effective. If we were going into a state semifinal and the other team can just camp on Korrin, Korrin is going to have to work twice as hard. We can go pin-to-pin on offense.”

Senior Libero Jordan Best is the fourth returning starter from last year and has been rock solid on defense ranking third on the team with 92 digs while also serving 21 aces.

As key as the returning starters have been, a new starter at a key position is a big reason why the Lady Cats are back in the state semifinals.

Noel Anthony entered her senior year with a grand total of 23 varsity set assists and was tasked with taking over for Brenna Campbell, who had been Clarion’s starting setter for four years.

“That is why we are always here because I train a setter,” Campbell said. “The key to being a great team is having a setter who can run an offense. Noel has put in her time. She ran the JV offense, and last year the growth she made and the work she did side-by-side with Brenna, she has really made leaps and bounds. She probably would have been the starting setter for 90 percent of the other Class 1A team last year. She had to wait her turn. It was fun to watch the mentorship that happened between them. They have a really great relationship. I know Brenna is super proud of Noel and would love to see a win for Noel again.”

In order to get back to the PIAA title match, Clarion will have to go through a tough Bishop Canevin team that would love nothing more to pay the Lady Cats back for ending its season last year.

“We have seen them so many times,” Campbell said. “I think it helps. It is a known opponent. We are going to see some kids on the court who we saw last year. They have gotten better, and we will also see some new faces. I expect a good match, and I expect it to be a challenge. We will be ready for them, but we are certainly not thinking this is in the bag. They are a great team, a very formidable opponent, and I know they are looking to beat us. History is in our favor, but it is certainly a motivating factor for the. We will work hard to be humble and to score the 75 points needed to win the match.”

The Crusaders, whose only loss was a 3-2 setback to Class 2A semifinalist North Catholic, have a well-balanced attack that features four players with at least 100 kills.

Senior middle blocker Abbie Maziarz leads Bishop Canevin with 259 kills (3.7 per set) and 43 blocks while ranking second on the team with 56 aces.

Sani Jones, a senior, is an experienced setter as a two-year starter and has recorded 640 set assists (8.1 per set) while leading the team with 63 aces and adding 130 digs, second on the squad.

Both teams are coming off hard-fought quarterfinal victories.