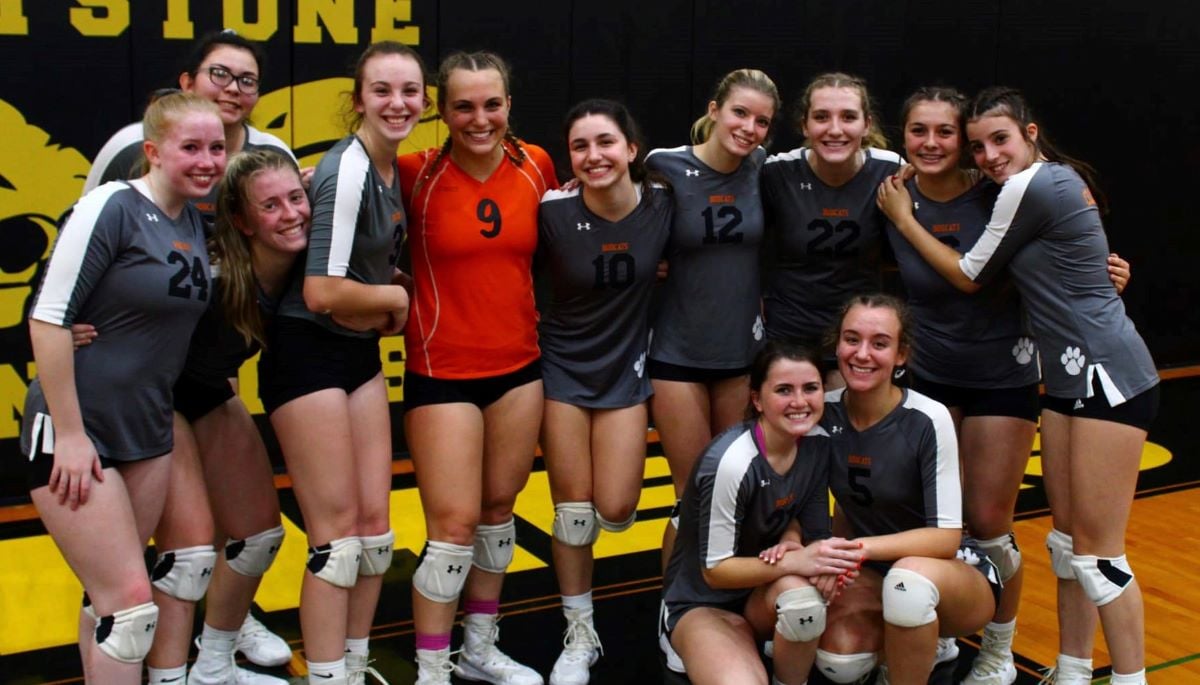 Burns recorded 25 kills while hitting .386, as Keystone had no match for the Lady Cats’ senior who is headed to St. Francis (Pa.) on a volleyball scholarship.

Burns, who was named the Allegheny Grille of Foxburg Player of the Match, was at her best at some of the most important moments of the match.

With Clarion, the top-ranked team in Class 1A in the state, trailing 24-22 in the first set and in real danger of dropping its first set since losing set No. 3 at Warren Sept. 20 in a 3-2 win, Burns recorded a kill to make it 24-23. She then tied things up at 24 with another kill before a passing error on Keystone gave the Lady Cats a 25-24 lead. Burns then finished the comeback with another kill giving her seven in the set.

“Staying calming,” Burns said about Clarion’s ability to come back. “When we have confidence and know what we are doing, it feels great.”

According to Burns, there was a bit of hesitation from the Lady Cats in the first set that allowed Keystone to take a 19-15 lead off a Leah Exley kill.

“There was a little hesitation that beginning game,” Burns said. “That is why we were lower in them. But, I thought we did well.”

After the Exley kill gave Keystone the four-point lead, Clarion head coach Shari Campbell called timeout, and her team responded with six of the next seven points to go up 21-20 with Burns recording a kill to tie things up at 20.

Keystone coach Bryan Mong then called a timeout of his own, and his team used four Clarion errors to get to the brink of taking the set, 24-22, before the Lady Cats rallied again after another Campbell timeout.

Using the momentum gained late in the first set, Clarion rolled to the easy 25-14 second-set win with Burns again leading the way with eight kills.

The set was close for a while with Clarion leading 14-13 before a Burns kill started a 7-0 run that put the set away.

In the third set, the Lady Cats trailed 8-7 before Burns took over again with four straight kills before a pair of Adia Needham service aces helped finish off a 7-0 run that gave Clarion a 14-8 lead.

But Keystone answered with a 6-0 run of its own that included three blocks – two tandem, one solo – from Natalie Bowser and a pair of Leah Exley kills to tie things up at 16.

After a service error, one of six in the third set and 12 in the match by the Lady Cats, got Keystone back within one, 17-16, Keystone gave the point back with a service error of its own, one of eight by the Lady Panthers, and Clarion never led by fewer than two the rest of the set.

Burns helped finish off the set with a pair of kills before Grace Ochs ended the match with an ace.

The win closed out a perfect regular season for Clarion, which finished 13-0, including a perfect 11-0 in the KSAC for another KSAC title a year after winning the PIAA Class 1A title.

“The KSAC is a big deal,” Burns, who also added nine digs and a service ace, said. “We don’t want to diminish that at all. Yeah, there is a state championship. But, we are focused on the now. We are going day-by-day. We don’t know if our next week is guaranteed. So, we are focusing on today.”

Aryanna Girvan added nine kills while hitting .368 and digging three balls in the win with Noel Anthony running the offense with 33 set assists while chipping in four digs, two aces, and a kill.

Payton Simko also played well, especially on defense, for Clarion tallying nine digs to go with a kill, and Ochs had seven digs and the match-winning service ace.

Keystone, which finished the regular season 15-4 including 8-3 in the KSAC and should be the top seed in the D9 2A playoffs, was paced by seven kills from Exley and five kills and four blocks from Sydney Bell. Jozee Weaver chipped in three kills, while Alyssa Weaver ran the offense with 10 set assists while adding five digs.

District 9 is hoping to release its volleyball playoff brackets Sunday.

District 9 Releases Soccer Brackets
Oct. 21, 2021 VB: Warren Sweeps Maplewood; Karns City Wins to Get Playoff Spot
We use cookies on our website to give you the most relevant experience by remembering your preferences and repeat visits. By clicking “Accept All”, you consent to the use of ALL the cookies. However, you may visit "Cookie Settings" to provide a controlled consent.
Cookie SettingsAccept All
Manage consent