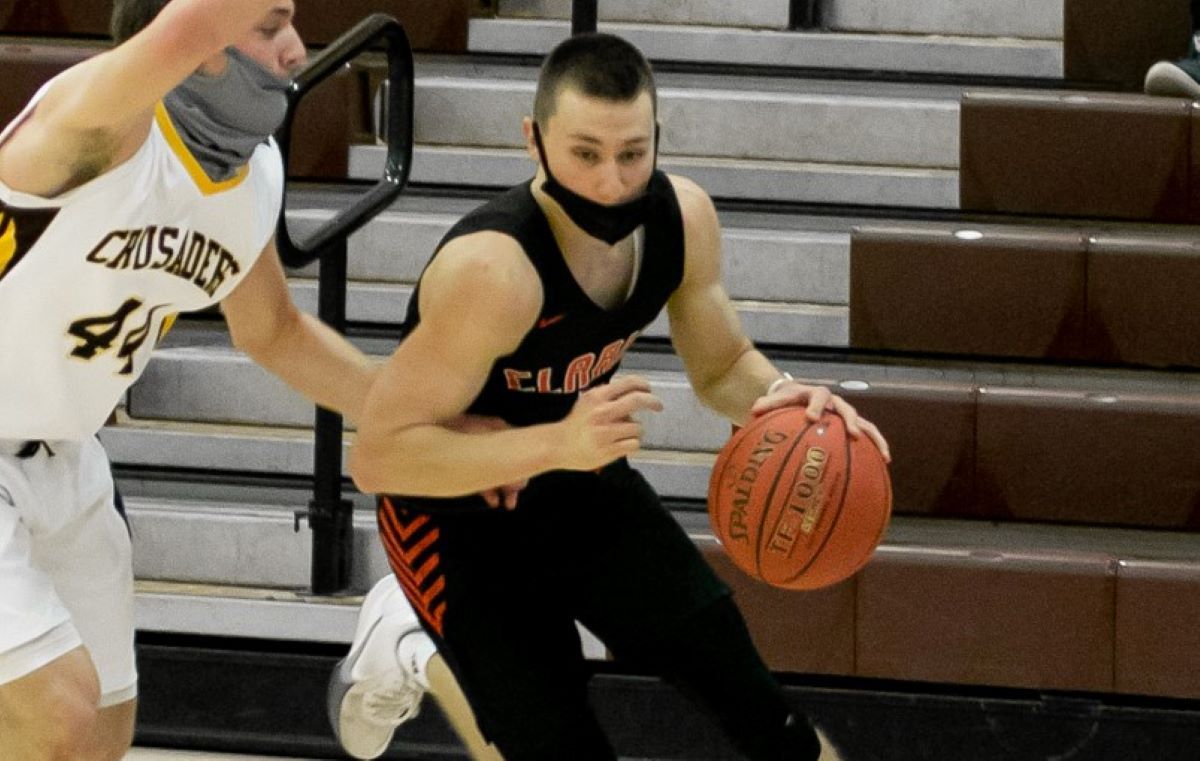 The Bobcats started the game on a 7-0 run and didn’t look back as the defense never allowed the Crusaders to lead through 32 minutes of play.

“The 7-0 lead was huge,” Clarion head coach Scott Fox said. “We were focused on starting off big. We didn’t want them to start off strong and have to claw back throughout the game.”

Along with a strong start, free throws played a major factor in the fourth quarter with the Bobcats went 12-for-14 from the line while still outscoring the Crusaders, 14-11.

“They’re very important,” Clarion senior Beau Verdill said of the team’s success at the line. “They can win us games as they did tonight.”

Verdill went 4-for-4 in the fourth quarter from the charity stripe and Cal German went 5-for-6.

The duo combined for 31 points with German leading the way with 17 and Verdill contributing 14.

The Crusaders fought back from the slow start and tied the game 13-13 with a minute left in the first before a German field goal with 25 seconds left gave the Bobcats a 15-13 edge at the end of eight minutes.

A Charlie Briendel free throw cut the deficit to one at the start of the second quarter, but a German 3-pointer sparked an 8-0 run for the Bobcats as they extended their lead to seven (30-23) at halftime.

A 6-0 run midway through the third got the Crusaders within one (37-36) but the Bobcats offense would continue to keep the lead as they would answer each time Elk County scored and held a 41-38 lead heading into the last quarter.

Mason McAllister got Elk County within one again (41-40) with a field goal to start the fourth, but with the Crusaders in the penalty, each foul gave the Bobcats a one-and-one where they were near perfect to close out the game.

Despite being outscored 14-11 in the fourth, the Crusaders defense only gave up one field goal in the final eight minutes.

Offensively for the Crusaders, Mark Kraus paced the team with 17 points including three 3-pointers. Breindel chipped in 13 tallies while Luke Jansen added nine.

Along with the duo of German and Verdill, Hunter Craddock contributed 13 points for the Bobcats with Ethan Burford netting nine.

Clarion will advance to the District 9 title game on Tuesday, March 16th against third-seeded Johnsonburg, who defeated second-seeded Cameron County, 26-24.

“Tonight it finally happened,” Verdill said of being back in the title game. “We’ve been working all summer just to get here and get to this position.”

NOTES – It is the second straight season Clarion will play for a D9 title. Last season, the Bobcats lost to Ridgway in the 2A title contest. Clarion hasn’t won a District 9 title since 2003, and it is only Clarion’s third trip to a D9 title game since 1989 … Even though this year was going to be tough to make the PIAA playoffs with only the champion advancing, it marks the first time since 2013 that ECC failed to make the PIAA playoffs. It is also the first time since 2015 the Crusaders have failed to reach the D9 1A championship game. In fact, the Crusaders had been to 16 of the past 22 D9 1A title games … It is just the fourth home loss for ECC since the 2014 season and just the 22nd since the start of the 2001 season.

Watt Rebound and Putback in Final Minute Lifts Johnsonburg into D9 1A Boys’ Title Game
Franklin Battles Past Sharpsville for D-10 3A Title, Fulmer Scores 1,000th Point
This website or its third-party tools process personal data.In case of sale of your personal information, you may opt out by using the link Do not sell my personal information.
×
Manage consent