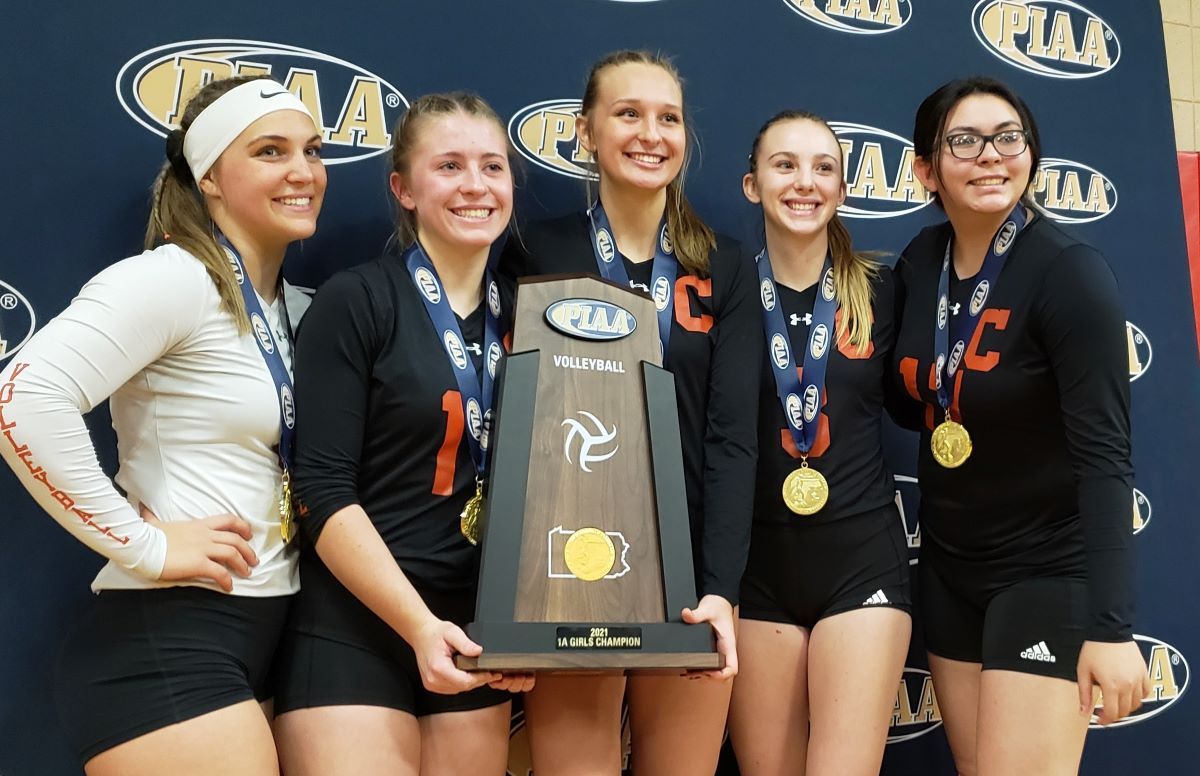 The Lady Cats have now won back-to-back PIAA Class 1A titles without losing a match having won 45 in a row. Even more mind-blowing is the fact if you counted up the number of sets Clarion has lost during that win streak, it could have only lost one match.

That’s because the Lady Cats have lost just three sets in two years – one last year and two this year.

One would think that with that kind of dominance, Clarion would never have to show fortitude, would never be in a position where it needed to dig deep.

One would be wrong.

Especially this season, Clarion had to, on more than one occasion, dig deep to keep its streak alive.

Whether it was trailing 2 sets to one at Warren Sept. 20 without middle hitter Adia Needham and with outside hitter Aryana Girvan playing on one leg or trailing in the second set at DuBois Oct. 11, 21-13, only to win 27-25, or even in the PIAA semifinals being down in the opening set, 20-14, to Bishop Canevin before rallying for a 25-23 win, Clarion’s fortitude has been tested multiple times this season.

And it was again in the 25-22, 25-13, 25-18 win over Sacred Heart Academy that secured a second straight PIAA Class 1A championship for the Lady Cats.

This time it was in the first set and was self-inflicted to a large part.

Clarion committed 10 hitting errors, two service errors, and at least one passing error to help heavily under dogged Lions stay in a set that featured seven lead changes and 16 ties and saw Sacred Heart hold a 21-20 lead while being tied at 22.

Many of the key players contributed those mistakes to nerves.

“There were definitely a lot of nerves,” junior outside hitter Aryanna Girvan said.

“It was 100 percent nerves,” senior outside hitter Korrin Burns, who had a match-high 19 kills said. “I was pretty calm, actually, but it was an intense first game.”

But despite the nerves, despite the mistakes, Clarion did what it had done so many times this year in moments like that. It kept calm and carried on.

“We were definitely nervous,” senior Libero Jordan Best said. “We just had to take deep breaths, look each other in the eye, be there for each other and our rhythm would come and we would be fine.”

Fine indeed, Girvan, Burns, and junior middle hitter Adia Needham helped keep things together with Needhman coming up especially big at the end of the set with a block and an ace in the final three points for Clarion.

“Energy is the main key,” senior right-side hitter Payton Simko said. “Energy got us through all those mistakes. We just stayed positive and worked on it.”

And once that set was won, it was business as usual for the Lady Cats.

After allowing Sacred Heart to score 22 first-set points, Clarion limited the Lions to 31 in the final two sets.

“Our serving really came into effect,” Burns said. “We really used it to our power, and I think the other team just kind of crumbled.”

Girvan said the Lady Cats knew the match was theirs after the first set.

“We knew we had complete control,” Girvan said. “We were able to take over the game.”

Grove City Stops Slippery Rock to Claim D10 Class 3A Football Title
Twice is Nice: Clarion Becomes Just Fourth 1A Team to Win Back-to-Back PIAA Volleyball Titles
We use cookies on our website to give you the most relevant experience by remembering your preferences and repeat visits. By clicking “Accept All”, you consent to the use of ALL the cookies. However, you may visit "Cookie Settings" to provide a controlled consent.
Cookie SettingsAccept All
Manage consent