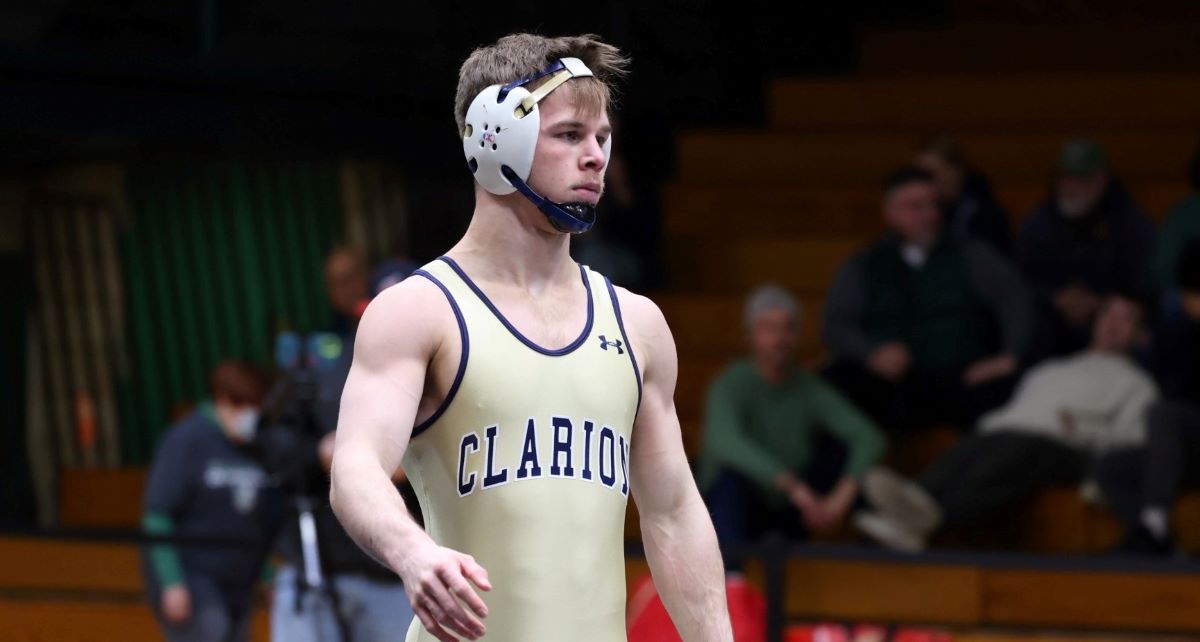 CLARION, Pa. – The Clarion Golden Eagle wrestling team wrestled their first match in front of home fans for nearly a year and matched the crowd’s passion with their own, coming out hot for a 25-12 dual victory over George Mason in Tippin Gymnasium.

After nine straight duals away from home to start the 2022-23 season, Clarion finally had the opportunity to host a match in the friendly confines of their home gym. They were not kind hosts to the Patriots, though, winning seven of the 10 bouts contested on Friday night. That included five straight wins to start the dual as the Golden Eagles put George Mason in an early 16-0 hole.

Clarion got the better of the Patriots in bonus points with a 10-6 advantage, as Ty Bagoly rendered a major decision over Jon List at 197 pounds and Kyle Schickel pinned Nate Higley 94 seconds into the 149-pound bout. Schickel’s win marked the official match clincher for the Golden Eagles after the Patriots pulled closer with wins at 125 and 133 pounds.

The first three bouts of the night were tight contests, with the Golden Eagle competitors finding a way to win in each to build the team’s advantage. Cam Pine built an early advantage over Paul Pierce in the 165-pound bout that started the night, but the junior needed a late scramble in the third period to hold on and finish with a 8-6 decision. Conversely, John Worthing trailed Logan Messer 4-3 heading into the third period of the 174-pound bout, but Worthing took down his opponent with roughly a minute left in the third period to take a 6-4 edge. The sophomore made that lead stand up the rest of the way, fighting off several late shots by Messer for the 6-5 decision.

Will Feldkamp pushed the Golden Eagles’ team edge to 9-0 at 184 pounds with a gutsy, low-scoring effort. Tyler Kocak took Feldkamp down in the first period and eventually built a 3-1 lead, but Feldkamp took Kocak down on the edge of the mat to knot it up at 3-3. He started the third period with an escape to take a 4-3 lead and defended Kocak the rest of the way for a decision.

Bagoly got things started quickly at 197 pounds, taking down Jon List and tilting him for four back points to take an early 6-1 lead. He continued to chip away at List, picking up the riding time point to secure an 11-3 major decision and a 13-0 team lead. Austin Chapman defeated Donovan Sprouse by 7-4 decision to punctuate the five-match win streak for the Golden Eagles, giving Clarion the big lead.

The Patriots would not go quietly, though, pulling to within 16-9 after the lineup flipped back to the lower weights. Seth Koleno stopped the bleeding with a win at 141 pounds, coming back from an early deficit to beat Anthony Glasl by 12-6 decision. Moments later Schickel clinched the team win, earning the fall in the first period.

ERIE, Pa.—The Mercyhurst Wrestling team picked up a convincing 38-9 win over Shippensburg on Friday night in the Mercyhurst Atheltic Center. Six extra-point wins propelled the Lakers to victory over the Raiders.

Starting at 125, the Lakers earned six points off a Shippensburg forfeit. Tyshawn White the No. 2 wrestler at 125 moved up to take on No. 4 Eric Bartos in the 133 weight class. Bartos was leading 5-1 in the second period before having to injury default putting Mercyhurst ahead 12-0.

The 141-pound bout saw a dominate performance from Lakers’ freshman Jake Niffenegger. Taking a 6-3 lead in a little over one period, Niffenegger found his stride getting his fourth takedown of the bout which led him to a pin with seven seconds remaining in the second. His win gave the Lakers a commanding 18-0 lead.

Mercyhurst saw a break in momentum taking losses in the 141 and 149 matches but came back swinging as Mike Clark earned a win by decision followed by a major decision from No. 3 Dillon Walker. The Lakers increased their lead to 25-9 with three bouts left.

Freshman, Charles Stein got the nod at 184 and picked up four points for the team with a major decision.

Trevor Begin tacked on three more for the home team in the 197 bout.

Closing the match in dramatic fashion, Hunter Harnish picked up another six team points with a pinfall in the final period.