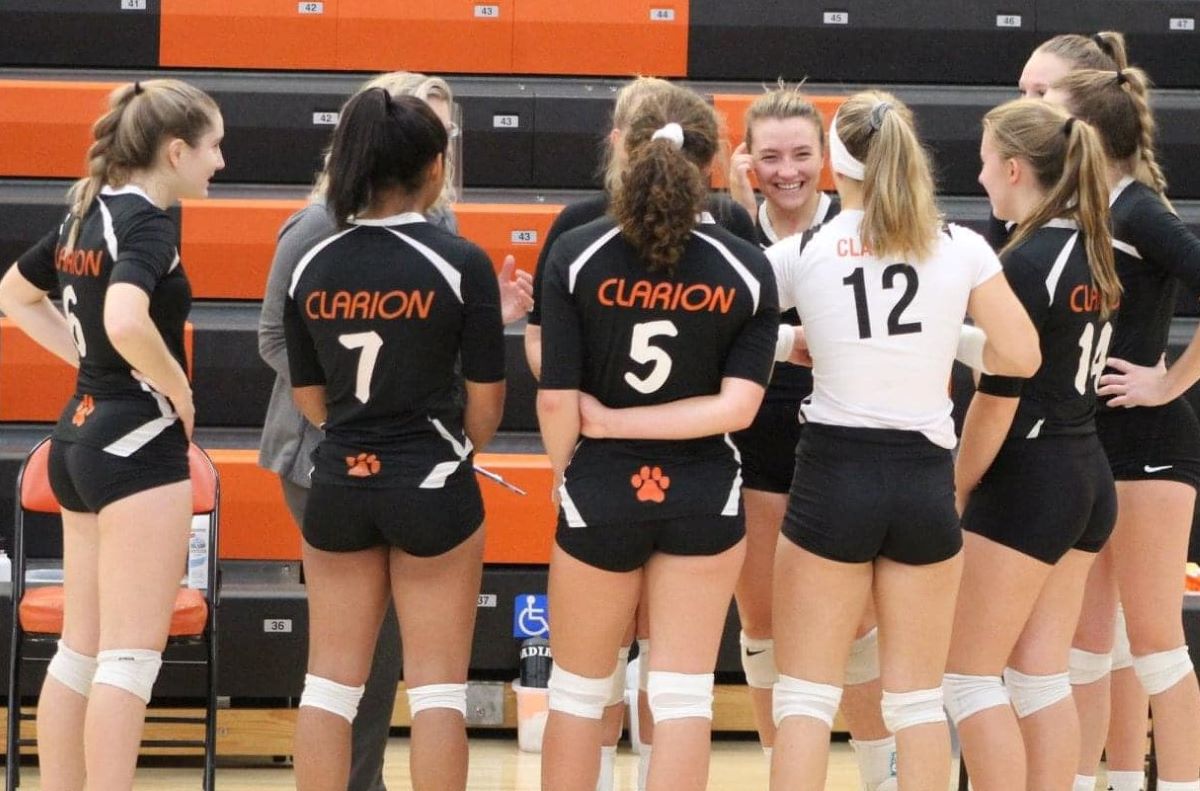 CLARION, Pa. – Korrin Burns was a hitting machine recording 21 kills and hitting .643, as top-seeded Clarion swept past fifth-seeded Oswayo Valley, 3-0 (25-8, 25-10, 25-7) and into the District 9 Class 1A volleyball championship match for the third straight season and for the sixth time in eight years.

“It was a team effort,” Burns said. “We had a lot of communication, and it was just a fun night.”

Rewatch the final point for Clarion

“The goal this year is to just survive one day at a time,” Clarion head coach Shari Campbell, who recorded win No. 400 with the victory, said. “To know that we are 20-0, to know we have had the opportunity to play 20 matches, I am just thrilled as a coach, as a mom, that these kids have gotten that opportunity. Really, this has just been the best place to be, with these kids going after this.”

As the Lady Cats, who are ranked No. 1 in the Class 1A in the state, have done all season, the offense was more than just Burns.

“We pull the blockers in,” Burns said of having so many strong hitters. “If Payton is running, it brings the blockers in and leaves areas for us to swing.”

Campbell focused on the improvement of Simko in the middle as something that has made Clarion’s offense stronger as the year has gone on.

“What I have seen lately, in these last two weeks, is the growth of Payton Simko,” Campbell said. “She is a phenomenal player. If you could see her in practice, where she is coming to and what she is adding offensively and where and where I think she can take us, then we are a whole different team. I think you saw a little bit of that tonight.”

None of the hitters would be having the success they are having without senior setter Brenna Campbell running the show.

Campbell had 39 set assists in the victory and was a big reason Clarion hit .519 as a team.

“It (the offense) is so much fun,” Shari Campbell said. “I give Brenna so much credit in that and where she has come to in her game as far as knowing where those hitters are and how to highlight that and how to keep the other teams defense on there toes. She is able to create blocking scenarios for those hitters to be successful. The choices she is making creates points.”

Clarion, which hadn’t played a regular-season match in two weeks since beating Venango Catholic Oct 22, didn’t show any signs of rest thanks to Burns, who had six kills in Clarion first nine points helping the Lady Cats to a 9-4 advantage right out the gate in the first set.

“She played phenomenal,” Shari Campbell said. “She has really been honing in on her game, getting control, which is just phenomenal to see. She has a command of the opponents work, which I think we are starting to see. That is super fun to coach, and she is really receptive to that. I love that.”

Brooke Bauer ECC hits over the block of Brianna Silvis of Otto-Eldred. Photo by Barb Close.

Burns ended the first set with eight kills and an ace, and she continued her hot streak to start the second set recording three kills and teaming with Adia Needham on a tandem block to help Clarion to the 9-1 lead in the second set.

Oswayo Valley fought back thanks to some serving errors by Clarion in the second set cand closed the gap to 13-8 before Shari Campbell called timeout.

Out of the timeout, the teams exchanged points to make it 14-9 before Clarion went on a 8-0 run to put the match way.

Burns had a pair of aces and a kill during the spurt with Needhman adding a block and a kill.

“We had missed five serves (when the timeout was called), Burns said. “So the majority of their points they got we made on errors.”

In fact, all 10 of Oswayo Valley’s second-set points were because of Clarion errors.

With a return trip to the finals at hand, the Lady Cats left no doubt at the start of the third set as to who the better teams was with Burns recording five kills, Simko adding two kills, and Brenna Campbell pair of aces in taking the 16-2 lead.

“I’m very excited,” Burns said of returning to the D9 title game. “I am hoping everyone wears these beautiful maks so we can have a season, continue it.”

Jadyn Brabham led Oswayo Valley with seven kills, but Clarion held Brabham, a strong sophomore outside hitter for the Green Wave, to just two kills after she recorded five in the first set.

“We worked on reading her swing, getting ready, getting low,” Burns said of the defensive adjustments the Lady Cats made on Brabham.

“To be heading back to the District 9 champion for the second year is truly something to be proud of,” ECC head coach Kelsey Morey said. “It’s not an easy feat to accomplish. They played their hearts out tonight and through out the season and have most definitely earned this.”

Morey said the key early on for the Lady Crusaders was their focus, but she also believes her team lost some of that focus during the second-set loss.

“The girls came ready to play tonight and focused,” Morey said. “They showed that with a quick start in the first set. The second set we were not being aggressive in the first half, and that was our downfall. We were giving free balls and letting Otto set up their offense. We couldn’t catch up at the end with the lead we allowed.”

With the set tied at one, it could have gone either way. But Gabby Weisner wouldn’t allow it serving for 16 straight points to help the third-seeded Lady Crusaders to an easy victory in the set.

“Gabby Weisner served lights out,” Morey said. “That gave us the momentum.”

According to Morey, becoming aggressive again offensively also played a key role in the third and fourth sets.

“We also came alive again with our offense attacking and being more aggressive at the net (in the third set),” Morey said. “That carried right into the fourth set.”

Tami Geci ran the offense for the Lady Crusaders with 30 set assists and also had a kill and an ace.

“These girls on this team range from freshman to senior,” Morey said. “They have come together and solidified as a solid team and play for one another. They are a true team, and as a coach there’s nothing better than to see that.”

“I would like to congratulate Otto-Eldred on a very well played season,” Morey said. “They have a talented group of seniors, and I am sure they will be very missed next season.”

ECC will face Clarion, the team that beat the Lady Crusaders in last year’s title game and the No. 1 ranked team in Class 1A in Pennsylvania, for the D9 championship at Noon Saturday at Kane High School.

“As we head to face Clarion on Saturday, we know we are up against a very respected program and some tough competition,” Morey said. “We are ready to take on that challenge and lay it all out there because this is what it is all about. It’s what you play for, this moment right here.”

Nov. 5, 2020 Volleyball and Soccer Playoff Scores
Fairview, Mercer Capture District 10 Soccer Titles
We use cookies on our website to give you the most relevant experience by remembering your preferences and repeat visits. By clicking “Accept All”, you consent to the use of ALL the cookies. However, you may visit "Cookie Settings" to provide a controlled consent.
Cookie SettingsAccept All
Manage consent