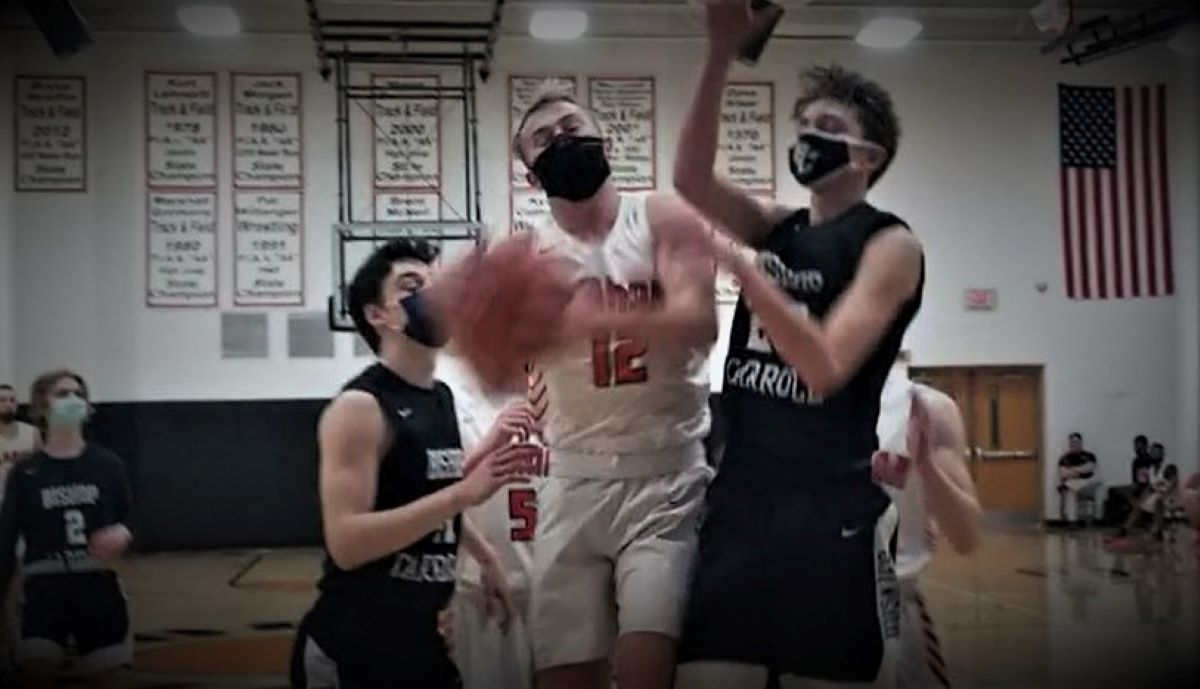 CLARION, Pa. – For the first time in over a half-century, the Clarion boys’ basketball team is in the PIAA semifinals.

The District 9 champion Bobcats, who led by 12 at halftime, used a game-ending 8-0 run to erase a 1-point deficit and get a 61-54 win over District 6 champion Bishop Carroll in the PIAA Class 1A quarterfinals Friday night at Clarion High School.

“It’s a great feeling,” Clarion’s second-year head coach Scott Fox, who has led the Bobcats to a pair of PIAA victories in his short tenure, said. “It’s great for these kids. They’ve worked hard to get to this point. It’s great for the program getting these younger kids some experience in the state playoffs, even if they are just sitting on the bench. It’s still a great experience for everybody.”

It is Clarion’s first trip to the semifinals since 1966 when it lost to Williamsburg, 79-73, in Class C. The Bobcats (17-9) will play District 5 champion Berlin Brothersvalley, which got a free pass into the semifinals when Bishop Canevin had to forfeit the quarterfinal game as the teams were warming up because of COVID-19 concerns.

“We are excited about the opportunity on Monday night,” Clarion senior guard Cal German said. “Our goal was Hershey.”

Clarion looked like it was going to cruise into the semifinals when it took a 31-19 halftime lead on the strength of 11 first-half points from Beau Verdill.

But Bishop Carroll fought all the way back and took a 54-53 lead on a baseline floater from Spencer Myers with 1:41 to play.

“We played a sluggish third quarter like we have been lately,” Fox said of an 18-9 disadvantage in the third quarter that allowed the Huskies back into the game.

Clarion had the answer in the form of Christian Simko, who had just missed an inside shot moments before.

“It’s just what is going on in the game,” Simko said. “I rushed a little hook shot down below. Next possession, I came down and saw I had the left-handed layup. It went in.”

After Simko’s layup, Bishop Carroll had ample opportunity to retake the lead.

But Myers and Luke Repko missed back-to-back 3-pointers sandwiched in between a held-ball steal by Evan Amigh.

The Huskies then got a third opportunity to go back in front after German threw a long pass out of bounds following the Repko missed 3-pointer.

But Beau Verdill came up with a steal and a breakaway layup to put the Bobcats up three, 57-54, with 18.2 seconds left.

“Beau’s steal was big,” Fox said. “His length helped out there. I am just glad he went up for the layup instead of trying to dunk it with his tired legs.”

Repko then turned the ball over by dribbling out of bounds after getting some token pressure from Aiden Quinn.

That forced Bishop Carroll to foul German. Usually not a good thing, as German is an 86 percent free-throw shooter. But the 1,500-career point scorer had been struggling over the last couple of games going 4 of 8 vs. Johnsonburg in the D9 championship game and splitting his first two free throws Friday night.

“I have the utmost confidence in myself,” German said. “One bad game doesn’t faze me. I knew I could make it.”

Verdill and Hunter Craddock then both came up with monster blocked shots in the waning seconds.

Shooting 54.5 percent (12 of 22) from the field in the first half while limiting Bishop Carroll to 6 of 24 (25 percent) was a big reason Clarion took the 12-point halftime lead.

But the Huskies did two things well after halftime.

They started shooting the ball better – BC was 14 of 31 (45.2 percent) in the half including 14 of 27 before missing its final four shots – and they turned up the defensive pressure.

In the third quarter alone, Bishop Carroll forced nine Clarion turnovers, and in the second half the Bobcats turned the rock over 11 times (22 for the game).

“We got really careless with (the ball) in the halfcourt,” German said. “They put some pressure on us. We’ve got to fix that for the weekend because we have a pretty tough team coming up on Monday. There are things to work on. But we will take the win tonight and get back (to work) tomorrow.”

“They definitely put the pressure on us more,” Simko said. “It was tough losing Ethan Burford, one of our main ballhandlers.”

Burford, Clarion’s senior point guard, who had already missed half the season with a non-basketball-related injury, appeared to badly turn his ankle 41 seconds into the second half. He couldn’t put weight on it, and was on crutches after the game.

“Ethan’s injury definitely had a key effect on (the second half),” Fox said. “We started turning the ball over, trying to force the ball too much.”

With Burford sidelined, freshmen Dawson Smail and Ryan Alston saw considerable playing time with Alston replacing Smail, a starter when Burford was out earlier in the season, after Smail struggled a bit.

While neither freshmen did a lot that showed up in the box score, German said their poise was key to the win.

“They picked it up and stepped it up tremendously,” German said.

Clarion seemed to fend off the Bishop Carroll comeback attempt when Craddock scored six of the first seven points of the fourth quarter for the Bobcats to extend their lead to eight, 47-39, with just under six minutes to play.

The Huskies, however, answered with a 7-2 run that saw four points from Myers, who had a team-best 19 points to go with six rebounds, to cut the deficit to three, 49-46, when Amigh hit the first fo a two-shot foul with 3:35 to play.

Craddock, though scored four of the game’s next seven points off fastbreak feeds from Verdill and German to push the lead back to four, 53-49, with 2:55 to play.

“I thought we pushed the ball well in transition tonight,” German said.

But it was two uncharacteristic inside misses from Craddock, who only missed four shots all night going 12 of 16 from the floor, around the 2:30 mark that allowed Bishop Carroll to crack the door open.

Simko then missed his inside shot, and Myers gave the Huskies their first lead since it was 2-0 with his basket.

But that was the only other lead Bishop Carroll had, as the Huskies led in the game for all of 26 seconds the entire night.

Clarion, meanwhile, led non-stop from the 2:35 mark of the first quarter until the Myers’ hoop with 1:41 left in the game and then again for the final 1:28 of the contest.

Watch Verdill give Clarion the 4-2 lead with 2:35 to go in the first quarter.

It continues a remarkable run for the Bobcats, who entered the District 9 postseason as the No. 4 seed and had to beat top-seeded Elk County Catholic and third-seeded Johnsonburg on the road just to get to the PIAA playoffs.

Clarion, which also beat A-C Valley at home in the opening round, has now won five in a row and six of seven after dropping four straight games between Feb. 20 and Feb. 26, including a pair of buzzer-beating losses.

“No, honestly I didn’t,” Fox said when asked if he thought after the four-game losing streak that the Bobcats would be in the state semifinals. “I didn’t know where we were going to end up, how we were going to right the ship at that point. It was tough. It was a tough couple of losses. We lost two buzzer-beaters. We were right there. But, we played some good competition. It has helped us come this far.”

For Simko, he now gets to experience a state semifinal game, something his twin sister, Payton, has experienced twice in volleyball, including this year when Clarion won the PIAA Class 1A state championship.

“It feels pretty good,” Simko said. “I know what she felt like now. It’s a good feeling.”

Verdill added a double-double for Clarion with 14 points and 11 rebounds to go with two assists, a steal, and a block. German also reached double digits with 10 points to go with eight assists and five steals. It was a mixed-bag game for him, as he turned the ball over eight times and was 3 of 9 shooting. Simko chipped in nine points, seven rebounds, three steals, two assists, and a blocked shot.

Repko had 15 points for Bishop Carroll and also grabbed five rebounds. But his 10 turnovers were a big reason the Huskies turned the ball over 18 times. Amigh added eight points and five steals, and Thomas Heinrich had seven points and six rebounds.

NOTES: This will be the fourth time Clarion is in the semifinals having beaten Hyndman-Londonderry in 1962, 55-47, before losing to Jim Thorpe in the Class C title game, and then losing to Rothrock, 51-44, in the 1963 Class C semifinals, and Williamsburg in 1966 … Clarion dominated inside Friday night outscoring Bishop Carroll 44-18 in the paint … Despite having four more turnovers than the Huskies, Clarion also outscored Bishop Carroll 19-11 off the turnovers, but BC did outscore the Bobcats, 13-12, in second-chance points thanks to 17 of its 32 rebounds being of the offensive variety … Clarion finished the game shooting 53.3 percent (24 of 45) but was only 1 of 6 from behind the arc and 12 of 23 at the foul line. Bishop Carroll shot 36.4 percent (20 of 55) including just 4 of 22 from 3-point range. The Huskies were 10 of 14 from the line … The other semifinal contest will feature District 3 champion LaAcademia Charter vs. District 11 champion Nativity BVM. The PIAA title game is set for 2:30 p.m. Thursday, March 25, at the Giant Center in Hershey … This was just Clarion’s fourth PIAA playoff win since the 1966 quarterfinals. The Bobcats beat Mon Valley Catholic in the first round in Class 1A in 1986, Homer-Center in the Class 1A first round in 2003, and Winchester Thurston in the Class 2A first round a year ago.