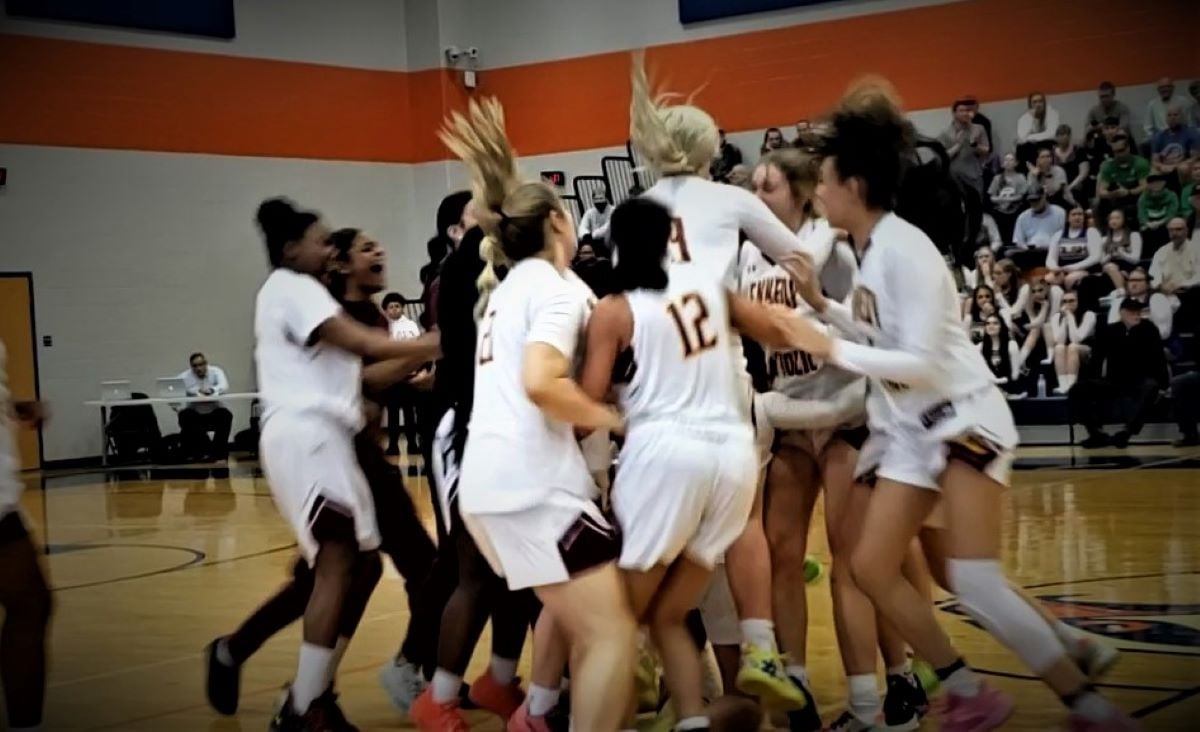 KITTANNING, Pa. – Young and old led Kennedy Catholic to its first PIAA Championship game appearance in 21 years, as freshman Layke Fields and senior Bellah DiNardo combined for 41 points in a 51-45 win over Portage in the Class 1A semifinals at Armstrong High School in Kittanning Saturday.

“We are so excited,” DiNardo, who once again led the way for the Golden Eagles with a game-high 22 points, said. “I really can’t even think about what just happened. We have been working for four years, and this is Layke’s first year, and she is a big part of why we won today. So, I am so excited that we are going to be here on Thursday in Hershey.”

Kennedy Catholic celebrates at the end of the game

It wasn’t easy for the District 10 champions, as the District 6 champion Mustangs made a furious rally in the game’s final four minutes to make for a nerve-racking ending for the Kennedy faithful.

But behind the sharpshooting of Ashlyn Hudak Portage (24-6) came storming back.

Fields stepped up in a big way when she scored, was fouled, and hit the free throw with 1:32 left to restore the advantage to seven, 47-40.

“They just couldn’t stop me,” Fields said. “My team just kept giving me the ball.”

DiNardo then hit one of two free throws with 1:04 to play to make it 48-40 before the Mustangs scored five straight points on a 3-pointer by Maryn Swank and two free throws by Brooke Bednarski with 49.5 seconds to play.

Paris Gilmore, who spent a good chunk of the game on the bench in foul trouble, hit two free throws with 36.2 left to make it 50-45, and Portage didn’t score again.

“We talk about these types of situations in practice every day,” DiNardo said. “We are more than prepared. Our coaches push us to our hardest ability and that is why we are where we are going to be today and on Thursday. We plan for games like this.”

Things started out well for the Golden Eagles, who led 8-0 less than two minutes into the game on a pair of baskets each by DiNardo and Fields.

Watch Fields score on a first-quarter putback for Kennedy Catholic to make it 10-3.

But Portage, which lived and died by the three-ball (of the Mustangs 13 made baskets 10 were 3-pointers) used a pair of threes to get within four, 10-6, by the end of the quarter.

“We never really take a team lightly,” DiNardo said. “But we did feel that we were the better team. We definitely showed that today, even if it was a hard game. We were better.”

Kennedy Catholic started to create some separation in the third quarter using an 11-3 run that saw Hayen Keith hit the only 3-pointer of the game for the Golden Eagles as well as four more points from Fields to push the lead to 13, 35-22.

But again Portage used the three-ball to claw its way back to within eight, 35-27, by the end of the quarter with Chobnay, who along with Sydni Sossong led the Mustangs with 12 points, hitting a triple with 15.8 seconds left in the quarter.

“I like games like this,” Fields said. “Easy games, you can just go through the motions. But you really have to play hard in these types of games and play every possession like our coach taught us.”

Kennedy Catholic had to rely on its depth with foul trouble hampering a couple of its starters, including Gilmore, the point guard.

But freshman Monique Vincent came in and handled the point well in place of Gilmore with Isabella Bianco and Alaina Suhr also giving the Golden Eagles solid minutes off the bench.

“We have a deep team,” DiNardo said. “We have five that can start. We five, six, seven that can come off the bench. When someone gets in foul trouble, we have other girls that will step up. We are a pretty deep team.”

Watch the full postgame interview with DiNardo and Fields.

For Magestro, the win was a sweet feeling and one he wanted to share and will share with his three seniors from two years ago who had their season abruptly cut short in the quarterfinals by COVID-19, a team many believed could make it to Hershey.

“Three of our seniors’ (from 2020), Mariah Vincent, Addie Flanders, and Malia Magestro, season got cut short,” Justin Magestro said. “We promised them when they graduated we would get there one year and they would be part of it. They are going to be making the trip to Hershey with us as well.”

Kennedy Catholic will face District 4 champion Northumberland Christian, a 62-54 winner over District 6 runner-up Williamsburg, in the PIAA title game at Noon Thursday, March 24, at the Giant Center in Hershey, Pa.

“I can’t tell you the feeling going to Chocolate Town where it is sweet, man,” Magestro said. “These girls have busted their tails for the entire season since last year when we got bounced. They were ready to go. (Portage) was very good, but we were better.”

For Fields, the freshman, the win fulfilled a prophecy she made at the start of the season.

Behind DiMichele’s 39, OLSH Rallies Past Kennedy Catholic in OT in PIAA 2A Semifinals
Prep Swimmers Take PIAA Class 2A Team Title; D9/10 Finishes Strong
This website or its third-party tools process personal data.In case of sale of your personal information, you may opt out by using the link Do not sell my personal information.
×
Manage consent