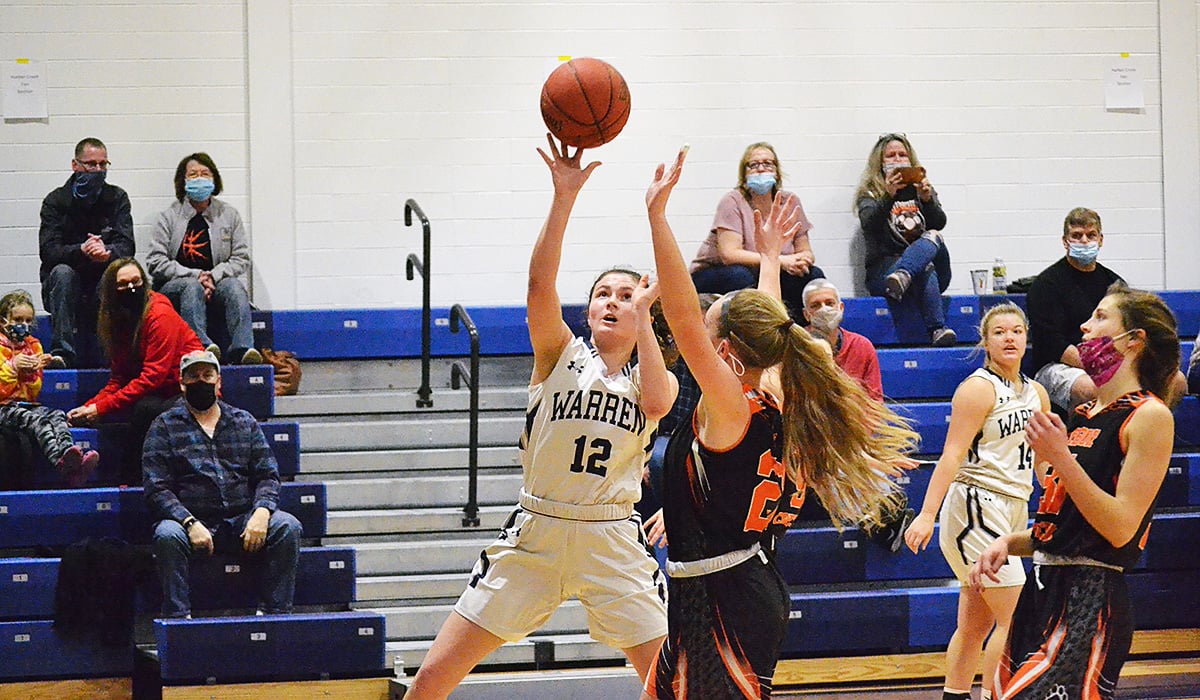 WARREN, Pa. – Warren struggled out of the gate, the Dragons missed their first 11 shots, in its District 10 quarterfinal game against Franklin. Junior guard Riley Childress made sure there was no repeat performance in the semifinals.

(Warren’s Riley Childress goes in for a layup during the first half of a District 10 Class 5A semifinal game against Harbor Creek Wednesday. Childress had a game-high 22 points.)

Childress knocked down a 3-pointer on Warren’s opening possession and scored the team’s first eight points on her way to a game-high 22 in a 43-27 semifinal win against Harbor Creek Wednesday. The Dragons advanced to their second D-10 title game in three years with the victory.

Emma Ruhlman had nine points and 12 rebounds in the win, while Lily Pulvino had a team-high 17 points for the Huskies. Warren’s defense held two of Harbor Creek’s top-3 scorers, Samantha Zank (11.5 ppg) and Rylee Kapsar (6.2 ppg) to a combined five points (Kapsar had all five points).

The second quarter mirrored the first as the Dragons outscored the Huskies 11-2 through the first four minutes and Harbor Creek answered with an 8-2 run to close out the frame. Warren held a 22-19 advantage at the half.

Neither team was able to get much going offensively in the third quarter. Pulvino got the first points just over two minutes in, then hit a 3-pointer with 3:37 left to give Harbor Creek a 24-23 lead, the Huskies’ first since late in the first quarter.

Childress made sure the lead didn’t last long as she completed a traditional 3-point play on the ensuing Warren possession to put the Dragons back on top, 26-24. Warren wouldn’t trail again.

Gracie Ruhlman hit a field goal and Emma Ruhlman knocked down a pair of free throws to stretch the lead to 31-24. The Dragons iced the game from the free throw line in the final three minutes. Childress, Emma Ruhlman and Kelsey Stuart combined to go 10-10 to help Warren pull away.

The Dragons will host Slippery Rock, a 42-36 winner over Grove City, for the D-10 Class 5A Championship in Warren Saturday. Tipoff is scheduled for 2 p.m.