Cathedral Prep Thwarted By Pine-Richland In Class 5A Championship Game 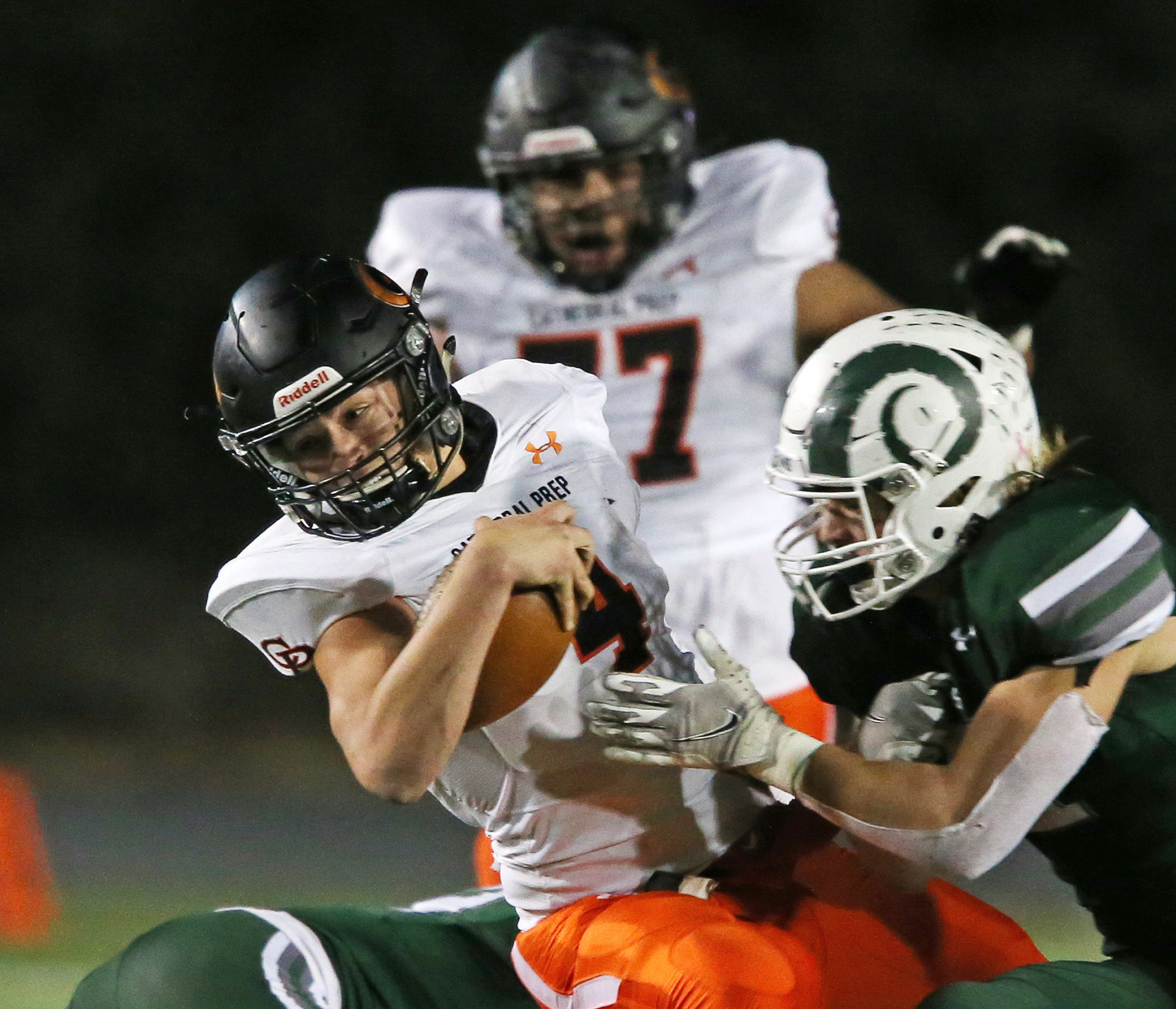 HERSHEY, Pa. – Sometimes you just run into a better team.

That was the case for the Cathedral Prep Ramblers, as they came up short in their bid for a sixth state title in program history, 48-7 against Pine-Richland in the PIAA Class 5A championship game at Hersheypark Stadium Friday.

It’s the second state title in program history for the Rams.

“We got our butts beat by a better football team tonight,” said Cathedral Prep coach Mike Mischler. “Our big thing was we wanted to get up on them and score early and put them behind and we weren’t able to do that.”

Pine-Richland’s vaunted passing attack gave way early in the game, as the Rams jumped out to a 21-0 lead thanks to the ground game.

Quarterback Cole Spencer, Jeremiah Hasley and Caden Schweiger all scored on the ground in the first half. For Schweiger, it was one of three touchdowns in the game.

Both offenses were stagnant in the opening 12 minutes, but the Rams were able to take advantage of a fumble recovery at the Prep (7-3) 25, with Spencer running it in from 17 yards out.

“I thought we played well in the first quarter,” Mischler said. “We had the unfortunate situation where we turned the ball over and they were able to push one in there.”

Prep was also hurt when senior captain and quarterback Tamar Sample injured his shoulder in the second quarter.

Sample has been great in the ground game this season, but was unable to throw the ball much after the injury.

“I tried my best to fight through it,” Sample said.

The Rams (12-0), meanwhile, had three and four play drives that resulted in scores in the second quarter, as a Spencer to Eli Jochem 41-yard pass set up Hasley’s 14-yard scoring run, and a 30-yard run by Jordan Burns, who had 130 yards on the night, set up Schweiger’s first score.

Prep responded, going on a 15-play, 74-yard drive that chewed up nearly seven minutes of clock, capped by a Sample to Patrick Fortin 3-yard touchdown pass with 17 seconds left in the half.

On the drive, Michael Parks, who led the Ramblers with 75 yards on 20 carries, rushed for 27 yards.

Prep’s Patrick Fortin (21) gets wrapped up after a catch. (Photo by Paul Burdick. Check out more of Burdick’s work here)

“Props to our offense in the second quarter for putting that drive together,” Mischler said. “But we just didn’t have it tonight against a really good football team. Really good job by their staff and players.”

Prep seemed to shake off some of the three-week rust without playing (they received forfeit wins in the quarterfinal and semifinal rounds) as the game went on, but their opening drive of the second half stalled and on the Rams’ initial offense play of the second half, Spencer hit Jochem on a screen pass and Jochem did the rest, going 86 yards to the house.

“We weren’t going to use that (layoff) as an excuse,” Sample said.

It was the beginning of the end for the Ramblers, as it turned out.

The Rams scored on drives of 10, four and three plays in the fourth quarter to put the ‘Mercy Rule’ into effect late.

Jochem finished with 162 yards receiving for the Rams, tied for fifth most in PIAA title game history, per pafbhistory.com.

Luke Miller was also a menace on defense for P-R, as the Kent State recruit was a big reason why Prep’s running game struggled to get going.

Sample added 90 yards through the air for Cathedral Prep.

“This team is a bunch of winners,” Mischler said. “It’s going to hurt. At the end of the day, we’re here and we played our hardest, overcoming all the obstacles this year presented. I appreciate the PIAA pushing through to make sure we played. We’re glad we were able to make it through and get here.”