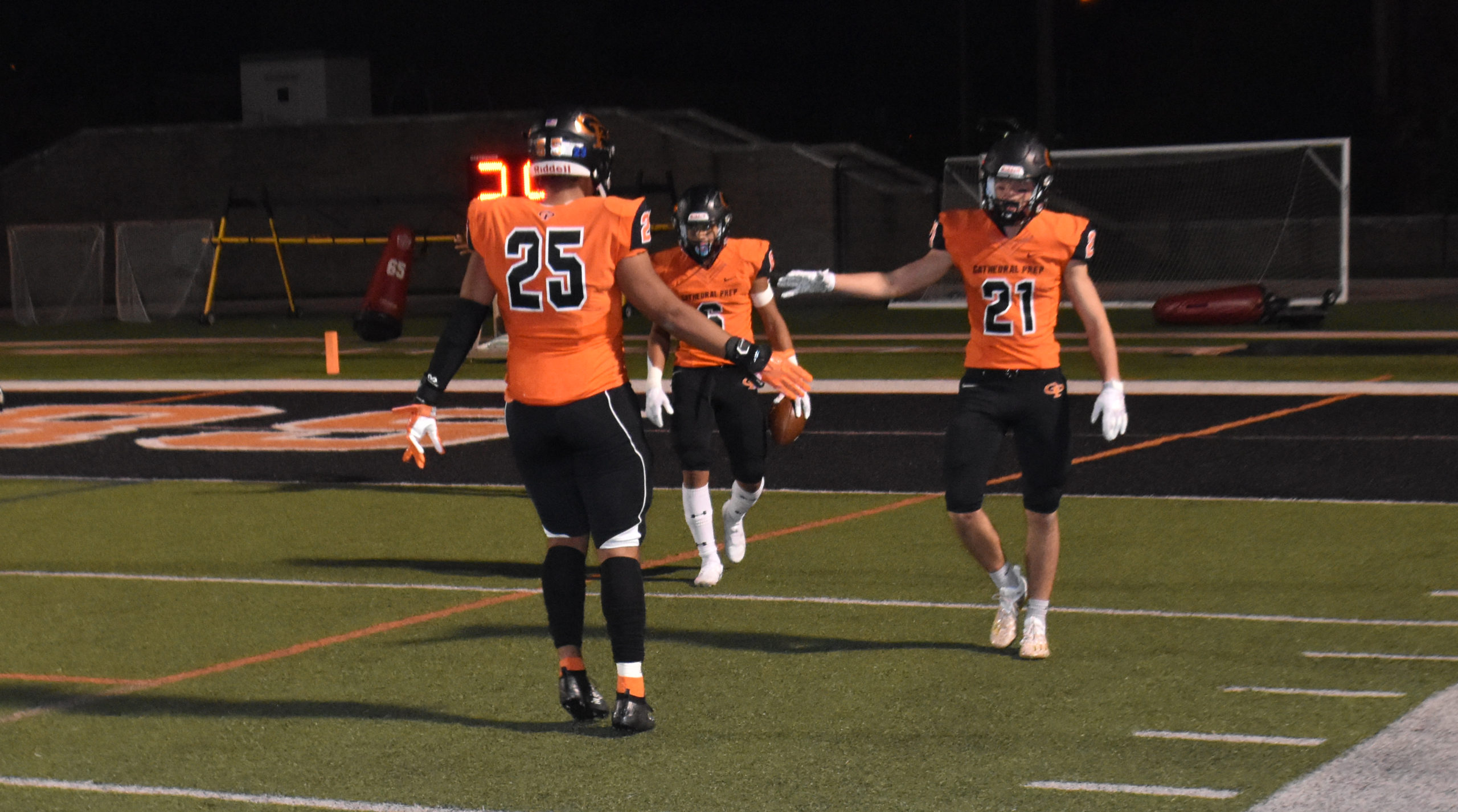 Cathedral Preps' Patrick Fortin (21) and Tyson Simon (25) celebrate following a play against Hollidaysburg in their PIAA first round game.

ERIE, Pa. – It might be a first in PIAA history.

The Cathedral Prep Ramblers were scheduled to play Wyoming Valley West in the quarterfinal round of the Class 5A state playoffs, but their opponent to the East forfeited because of a COVID-19 situation.

Last week, same thing happened with Upper Dublin in the semifinal round.

So here the Ramblers are, at 7-2 and in the state championship game where they will meet Pine-Richland.

He’s made one point to his team very clear, however – they deserve to be here.

And they don’t care what other people think of how they got to this point.

“Obviously we would have liked to have earned our way to Hershey, but I do feel like, and I told the boys I think we would have gotten here,” Mischler said.

“We would have played good football teams. We would have preferred to play those games, obviously, but I’m not going to let the naysayers, the people saying we backed our way in define us. I want the boys to know they belong here and, you know, they need to have that mentality going in if we’re gonna have a chance of winning.”

Mischler, who will look to guide Prep to its sixth state championship in program history, is also keeping things in perspective for his team.

COVID-19 has wreaked havoc around the country and around the world, and the Ramblers feel blessed to be able to play a game they love on the biggest stage.

“There are a lot worse things going on in the world right now (than what we’ve dealt with),” Mischler said. “People around this country and around the world are getting a lot worse news that we are not being able to play a game. It is what it is. We just have to keep the proper perspective on things and understand we’re so blessed to be playing a game. And it’s just that, a game.”

Pine-Richalnd comes into the game facing the other end of the spectrum.

They have played 10 weeks in a row and are coming off a thrilling 48-44 win over Governor Mifflin in the semifinals, a game in which they trailed by 22 points in the second half.

“I definitely feel like there are advantages to playing and being in a groove,” noted Mischler. “We played a very good game against Hollidaysburg and we thought we improved a lot of things that we didn’t do as well, but we wanted to take the next steps, to build on those little things you don’t think about.”

There’s also a major difference in terms of opponents.

The Rams, meanwhile, have faced 10 different teams to earn their 10 wins.

“I think they’ve seen a much more eclectic group of opponents and I think they’re in a groove right now obviously and they’re playing on supreme confidence,” said Mischler. “To come back and win a football game down 22 in the second half against a team like Governor Mifflin  shows that they have a lot of character and heart.”

Despite the different routes they took to get here, they’ll both be fighting for the same prize Friday night at 8 p.m.

And once the ball is kicked off, it won’t matter how they got to Hershey, just who executes the best over the course of 48 minutes.

(Note: D9and10Sports will have a Cathedral Prep/Pine-Richland game preview on Thursday.)

Unsung Heroes: Wilmington’s Offensive Line Paves The Way For Vaunted Rushing Attack
All-Region Football Teams Released In D-10
This website or its third-party tools process personal data.In case of sale of your personal information, you may opt out by using the link Do not sell my personal information.
×
Manage consent