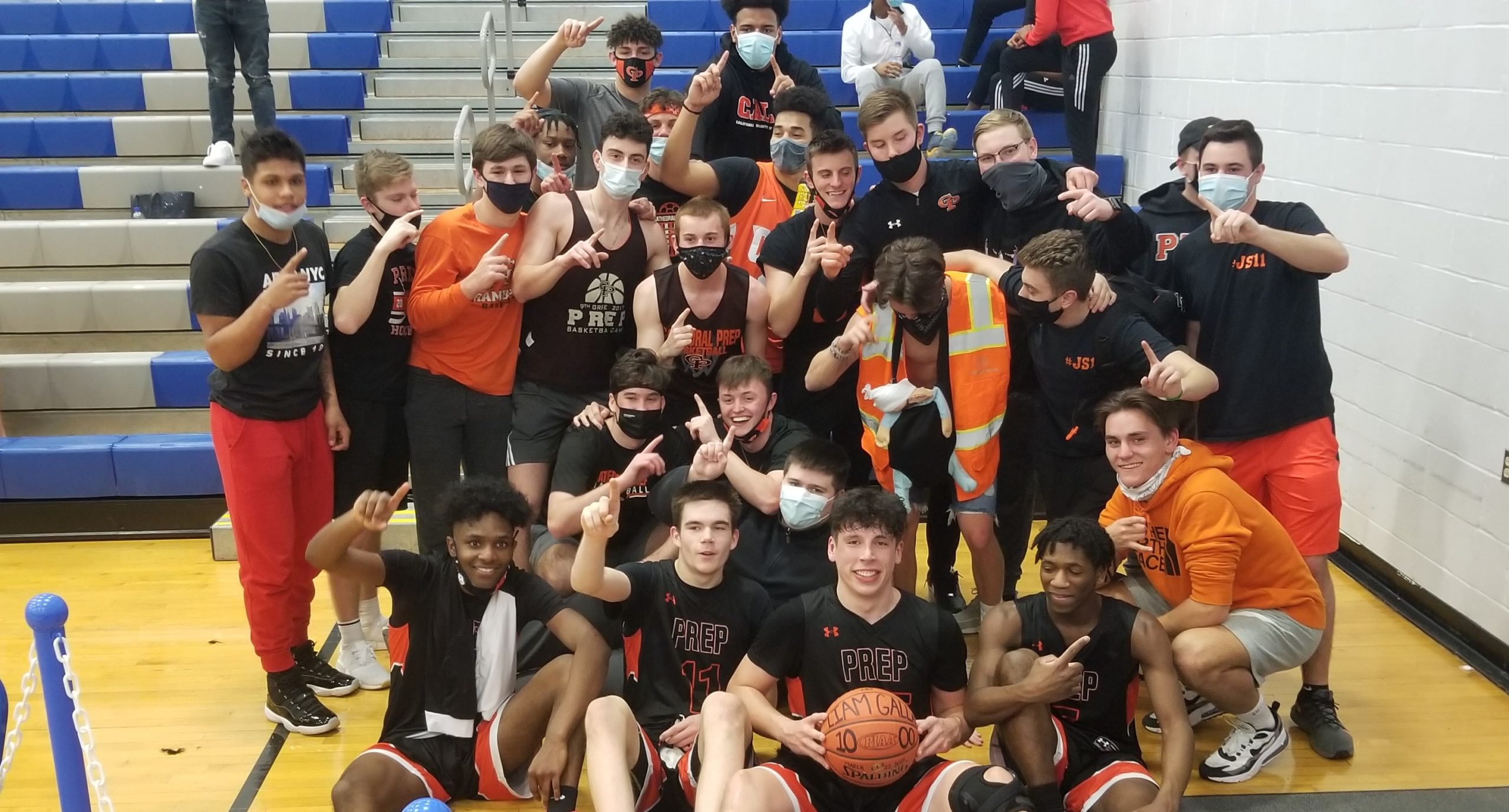 GREENSBURG, Pa. – Heading into the 2021 postseason, you would be hard-pressed to find anyone outside of the Cathedral Prep locker room who thought the Ramblers would be playing for a state title.

After all, Prep entered the postseason with a 4-5 record in its last nine games.

Tells you what that means.

The Ramblers are headed to Hershey for the first time since 1996 and for just the sixth time in the school’s PIAA history (Prep also won PA Catholic State titles in 1953, 1954, and 1968)  after knocking off District 3 champion Lower Dauphin, 54-46, in the PIAA Class 5A semifinal Monday night at Hempfield High School.

“This means a lot,” Prep senior Liam Galla, who scored his 1,000th career point in the first quarter and finished with 11 points and eight rebounds, said. “This is Prep’s first time in 25 years. It is just a great feeling for all of us. We all talked about leaving our own legacy before the game. Coach wrote it up on the board. We did that here tonight.”

“Coach” would be 2008 Prep graduate Steve Piotrowicz, who has the Ramblers one step from its first state championship since taking home the Class 4A crown in 1993.

According to Piotrowicz, he started getting a feeling his team could make a postseason run a few days before its District 10 championship game against Meadville, a team it had lost to by double digits twice during the regular season.

But the Ramblers beat the Bulldogs to win the D10 title then downed DuBois in the District 9-10 subregional before upsetting WPIAL champion New Castle in overtime in the quarterfinals.

“It was a couple of days before the D10 game,” Piotrowicz said. “All of us were frustrated. We were losing. We were going through a rough patch. But you saw the light at the end of the tunnel a little bit during practices. This team stuck together. They didn’t give up on each other. They didn’t give up on me. Now is the result. You are seeing it.”

Coming of the exhilarating upset of New Castle, one might have thought Cathedral Prep was due for a letdown against Lower Dauphin.

But the Ramblers trailed only once – 4-2 – and used a 19-6 first-half run to build a double-digit lead, 21-10, less than three minutes into the second quarter.

“Practice went well,” sophomore forward Khali Horton, who scored a team-high 16 points and grabbed eight rebounds, said. “We just listened to our coach, stated a game plan, and did what we needed to do.”

Junior Reece Colvin had a lot to do with the hot start.

Coming off the bench when Malachi Milsap picked up two quick fouls, Colvin scored six straight points for Prep in the second quarter to take a 15-8 lead and turn it into the 21-10 advantage.

Colvin finished with nine points in the game, his third-highest output of the season.

“My role isn’t a very big scorer,” Colvin said. “I just come in and try to provide a spark off the bench. If someone gets fouls early, I come in, just play defense, and look for people to score.”

“I thought Reece played an unbelievable game,” Piotrowicz said. “I love Reece Colvin. He reminds me a little bit of me back in the day. He’s going to give you everything he has no matter what. Up or down his energy, his intensity doesn’t change. He came in and really gave us a spark.”

After Colvin’s mini-run, Horton had back-to-back offensive rebounds and put back to push the Ramblers’ lead to 13, 25-12, midway through the second quarter.

Rebounding was a big deal in the game, as Prep outrebounded the Falcons 36-13. That included an incredible 13 offensive rebounds to only six defensive boards by Lower Dauphin.

“That was actually one of the biggest things that we had to do, get offensive boards, defensive boards, and just play defense as hard as we could,” Horton said.

Defense was a big reason the lead stayed double digits until a 3-pointer by Lower Dauphin’s Josh Gardner got the Falcons within nine, 30-21, at halftime.

The Gardner three was one of just three first-half long balls made by the Falcons, who were 3 of 10 from long range and 8 of 27 (29.6 percent) from the field in the half. For the game, Lower Dauphin was 17 of 46 (37.0 percent), which would have been even worse if the Falcons hadn’t shot 7 of 10 in the fourth quarter.

“Coach says offense doesn’t travel but defense always does,” Galla said. “We can always guard no matter what. We just stuck with that.”

Cathedral Prep’s offense did travel for the most part Monday.

The Ramblers shot 21 of 36 for the game (58.3 percent) and would have probably won by double digits if it wasn’t for 23 turnovers.

But even with the turnovers, Prep dictated the pace most of the game and never let Lower Dauphin get back within seven points after the early lead.

“We always want to play at our pace,” Will Innis, who scored seven points, said. “Having that lead, we are able to control the game and make plays for our teammates and really do what we want to do.”

But a free throw from Tavion Spencer started a 7-4 spurt that pushed the Ramblers’ lead back to 10, 49-39, on a Colvin basket.

Innes scored a layup during the run on a pretty passing no-look passing play from Galla.

A 3-pointer by Gardner, who scored a game-high 19 points, with 2:30 left gave Lower Dauphin one last glimmer of hope cutting the deficit back to seven, 49-42.

But that was as close as the game got, and Horton put the exclamation point on the win with a slam dunk in the final seconds off a pass from Colvin.

BREAKING NEWS: Hickory Tops Lincoln Park, Heads to 4A State Final
March 23, 2021 District 9 and District 10 PIAA Basketball Semifinal Schedule
We use cookies on our website to give you the most relevant experience by remembering your preferences and repeat visits. By clicking “Accept All”, you consent to the use of ALL the cookies. However, you may visit "Cookie Settings" to provide a controlled consent.
Cookie SettingsAccept All
Manage consent