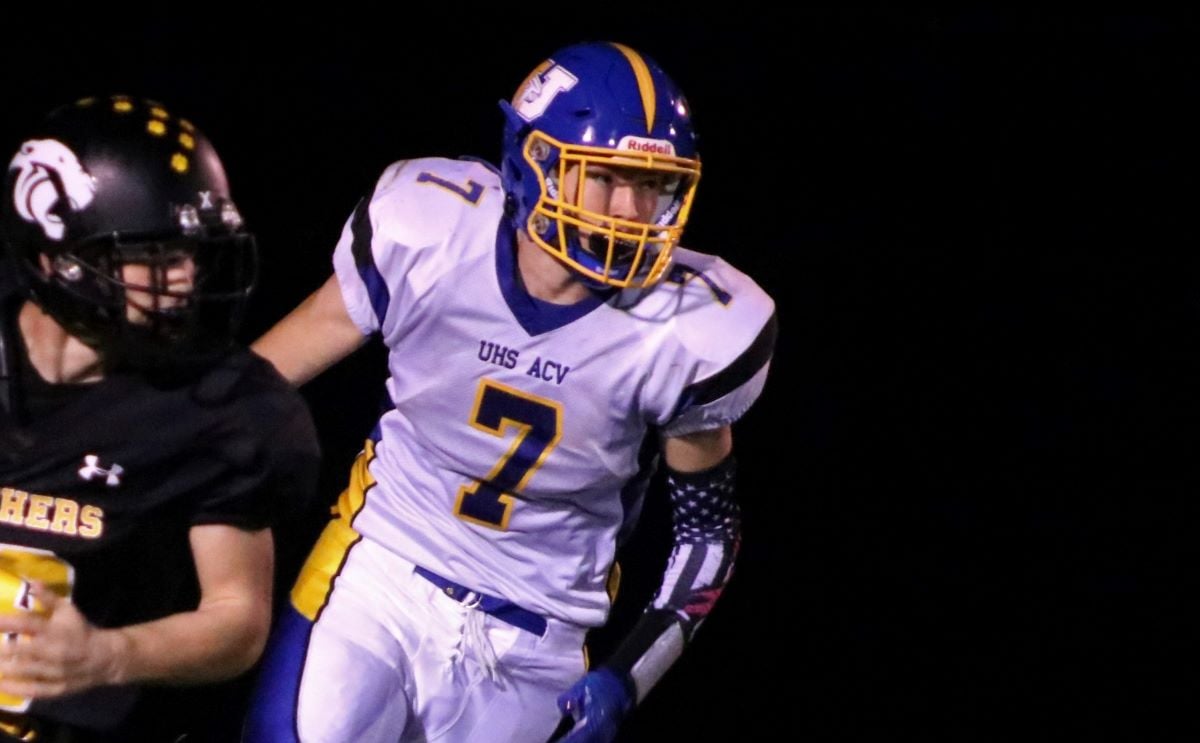 The win was a measure of revenge for the Falcon-Knights, who lost to the Rovers 28-20 in the season opener a year ago.

Camper rushed for 103 yards in the win and was named Allegheny Grille of Foxburg Player of the Game. He talked about the win.

Camper got the scoring going on a 42-yard burst through a big hole on the right side of the line at the 2:57 mark of the first quarter.

While the Falcon-Knights defense continued to keep Brockway in check, the offense went to some trickery to aid in its next score.

Backed up at their own 11, Camper took a pitch and threw to an open Skyler Roxbury for a 44-yard gain.

That helped set up Camper’s second touchdown run, a 3-yard plunge that made it 14-0 after Camper punched in the two-point conversion with 2:57 to go before halftime.

It was one of three touchdowns in the final 2:57 of the half.

On the ensuing kickoff, the Rovers (2-2) were unable to field the ball cleanly and Union/A-C Valley ended up with the ball on the 5-yard line. It was Camper who scored again, this one a 2-yard burst that made it 20-0.

Brockway responded by driving the length of the field in the final 1:18 of the half. Facing a second-and-goal from the 9 with four seconds left in the half, Brayden Fox eluded what looked to be a sure sack by Camper and found Alex Carlson in the corner of the end zone, making it 20-7 at halftime.

Brockway got the ball in the second half, but a fumble on the first play from scrimmage stalled the momentum they had and the Falcon-Knights once again took advantage.

Coach Brad Dittman went into his bag of tricks one more time as Trey Fleming took a handoff on a reverse and fired a dart to Roxbury for a 27-yard touchdown that made it 26-7 with 9:26 to go in the third quarter.

The Rovers mounted a rally the rest of the second half that ultimately came up just short.

They answered with a touchdown drive that was capped by Jendy Cuello’s 1-yard plunge that made it 26-14 with 5:52 to go in the third quarter.

That score held until the fourth quarter when the Brockway offense broke loose for a big play. Fox found Matt Pyne down the left sideline and Pyne beat his man and raced 72 yards for a touchdown that made it 26-20 with 8:03 remaining in regulation.

The Union/A-C Valley defense stood tall the rest of the way, however, including on the final drive when Brockway drove down to the 40-yard line, but with time expiring Fox’s last-second heave was intercepted by Roxbury.

Roxbury also had two receptions for 71 yards and a touchdown and Mikey Card rushed for 29 yards for the Falcon-Knights.

Fox had another big game through the air with 280 yards for the Rovers, while Carlson had 13 receptions for 121 yards and Cuello 61 yards on the ground.

Old-School Karns City Holds Off St. Marys
Union City, Kennedy Catholic Earn Saturday Football Wins
This website or its third-party tools process personal data.In case of sale of your personal information, you may opt out by using the link Do not sell my personal information.
×
Manage consent