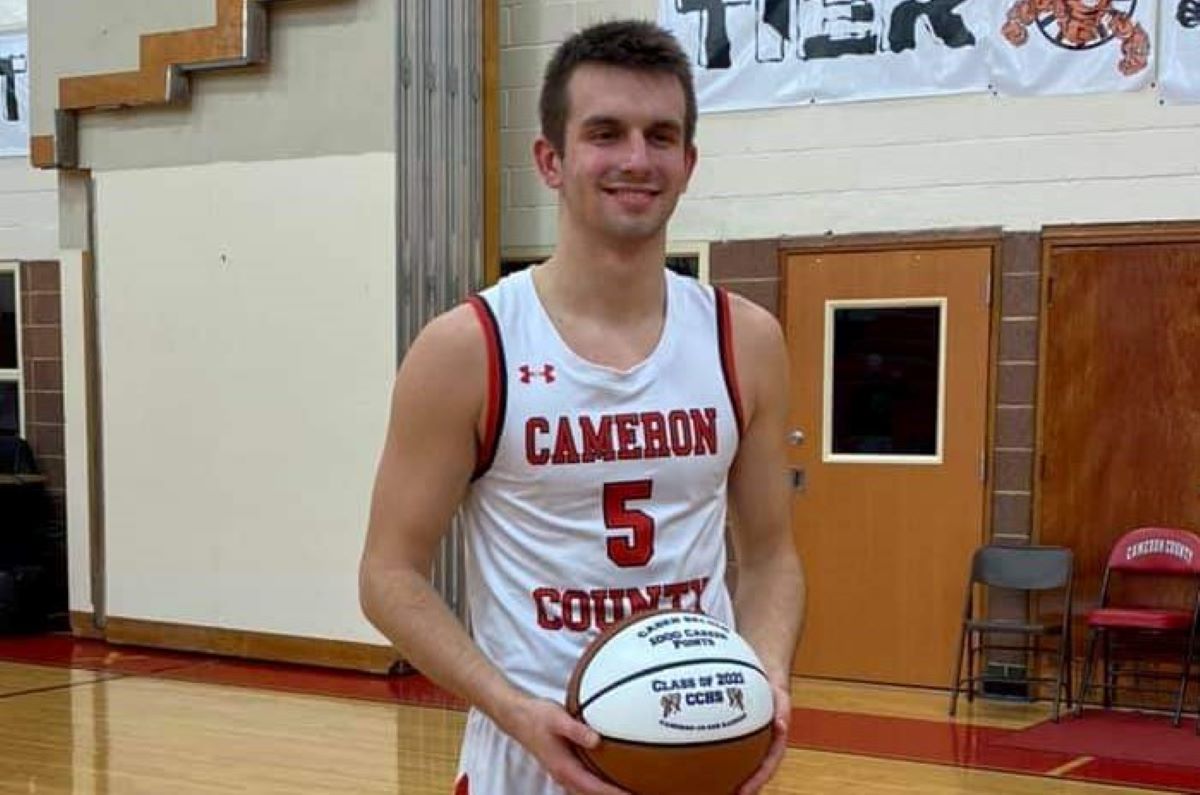 EMPORIUM, Pa – On Jan. 8, 2021, needing 32 points to Reach the 1,000 points mark, Caden Beldin sunk a 3-pointer from the top of the key in the fourth quarter to join the club in Cameron County’s season opener versus Oswayo Valley.

“I feel very honored to achieve this milestone that I have worked hard for since I started playing,” Beldin said.

Beldin said he grew up watching Nate Sestina, the Red Raider star who went on to a highly successful career at both Bucknell and Kentucky that led to a tryout with the Brooklyn Nets this season, and watching Sestina score 1,000 points helped cement that as one of his goals.

“After growing up watching Nate Sestina score his 1,000th point, I knew it was something I wanted to achieve,” Beldin said. “I set the goal and always pushed myself to become the best I can be. Rain, snow, or sunshine I was always getting shots up. I loved going down to our local courts at Memorial Hall and playing pickup with whoever showed up. I always wanted to play against the bigger kids and those who were better than me so I could improve my game. Going down to Memorial Hall and playing hard, physical games with people who were older than me definitely made me a better player.

Nate Sestina had a big impact on our community and my love for the game so I could not be happier to join the company of his and many other fellow 1,000 point scorers in Cameron County history.”

The COVID-19 pandemic has surely taken its toll on high school athletes, but Beldin did not let it lower his spirits.

“I always imagined scoring 1,000 at home in front of all the fans but unfortunately, due to COVID, that was not the circumstances,” Beldin said. “I was lucky to have at least my parents attend the game. Having limited fans is unfortunate but it is better than having no games at all.”

Cameron County head coach Marcus Brown knows the work Beldin puts in. Brown is not only Beldin’s coach but was also his teammate Beldin’s freshman and sophomore seasons.

“His hard work and dedication to the game helped him achieve his goal and I know he will continue to keep working every day,” Brown said.

After Saturday’s 48-44 win over Johnsonburg where Beldin scored 16 points to lead the Red Raiders, he now has scored 1,089 career points including 121 this season, an average of 17.3 ppg this year. Behind Beldin, Cameron County is 6-1 overall and a 5-0 in the NTL.

Jan. 23 D9 Hoops: CC Tops Jburg in Boys’ 1A Battle; FTs Help Austin Boys to Victory; Cullen Key in ACV Girls’ Win
District 9 and District 10 Basketball and Wrestling Schedule for Jan. 25, 2021
We use cookies on our website to give you the most relevant experience by remembering your preferences and repeat visits. By clicking “Accept All”, you consent to the use of ALL the cookies. However, you may visit "Cookie Settings" to provide a controlled consent.
Cookie SettingsAccept All
Manage consent