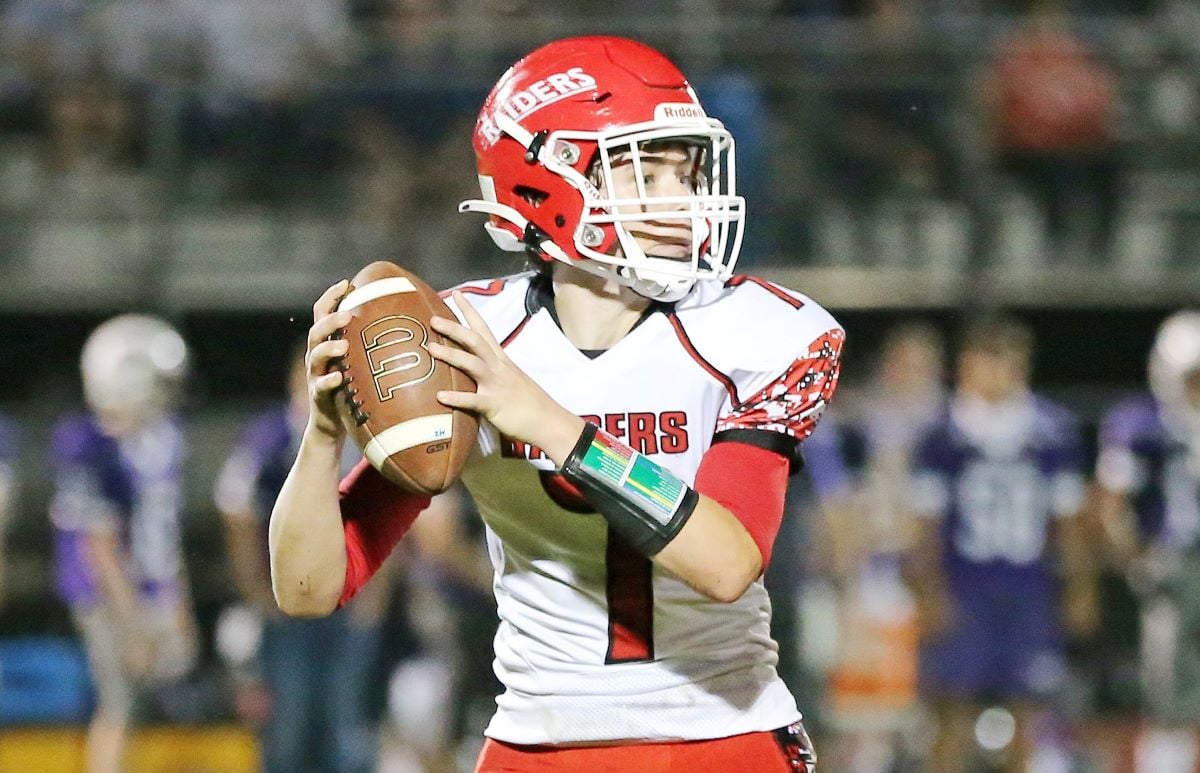 COUDERSPORT, Pa. – One of the most improbable wins in District 9 history happened Friday night in Coudersport, as visiting Cameron County, losers of 20 consecutive games, rallied from 13 points down with less than five minutes to play to stun Coudersport, 28-27, and give third-year head coach Ryan Neyman his first career victory.

Things didn’t look like they were going to get any better Friday night when the Falcons, under first-year head coach Frank Brown, took a 27-14 lead on a pick-6 by James Culvey with 6:46 to play.

But sophomore quarterback Maddox Baughman put the mistake behind him throwing a pair of touchdown passes in the final 4:48 to rally the Red Raiders to the victory.

Baughman, who threw four touchdown passes on the night, hooked up with Jameson Britton on a 1-yard scoring toss on a fourth-and-goal play with 4:48 left that coupled with the two-point conversion made it 27-22.

Cameron County’s defense then stiffened and the Red Raiders took over at their own 48-yard line.

A 17-yard pass to Dylan Baney moved the ball to the 35 before a 15-yard penalty on Coudersport moved it to the 20.

That’s when Baughman, who was 11 of 23 for 195 yards (he threw two picks to go with his four scores) hooked up with Baney for the go-ahead touchdown with 2:02 to play.

Baughman then sealed the win when he intercepted Gavyn Ayers’ desperation pass with 51 seconds to play. It was his second interception of the game.

Baney caught four passes for 113 yards and two touchdowns with Dylan Reider catching two for 58 yards and a score.

Coudersport jumped out to a 14-0 lead at the start of the second quarter on an 8-yard Ayers run and a 20-yard Ayers to Xander Brown touchdown pass.

But Cameron County tied the score early in the third quarter thanks to a 34-yard touchdown pass to Reider before halftime and a 32-yard pass to Baney early in the second half.

Coudersport answered with a 1-yard Ayers scoring run early in the fourth quarter before the interception return for a touchdown.

Ayers was 5-for-10 for 86 yards, a touchdown and two interceptions while also rushing 13 times for 71 yards and two scores. Culvey caught three passes for 56 yards and also had the pick-six.

Dylan Hazjus made 15 tackles on defense for the Falcons.

Watch Live: Union/A-C Valley at Brockway Football Powered by the Allegheny Grille of Foxburg
Aug. 27, 2021 D10 Football Recaps: Grove City Edges Meadville in High-Scoring Affair
This website or its third-party tools process personal data.In case of sale of your personal information, you may opt out by using the link Do not sell my personal information.
×
Manage consent