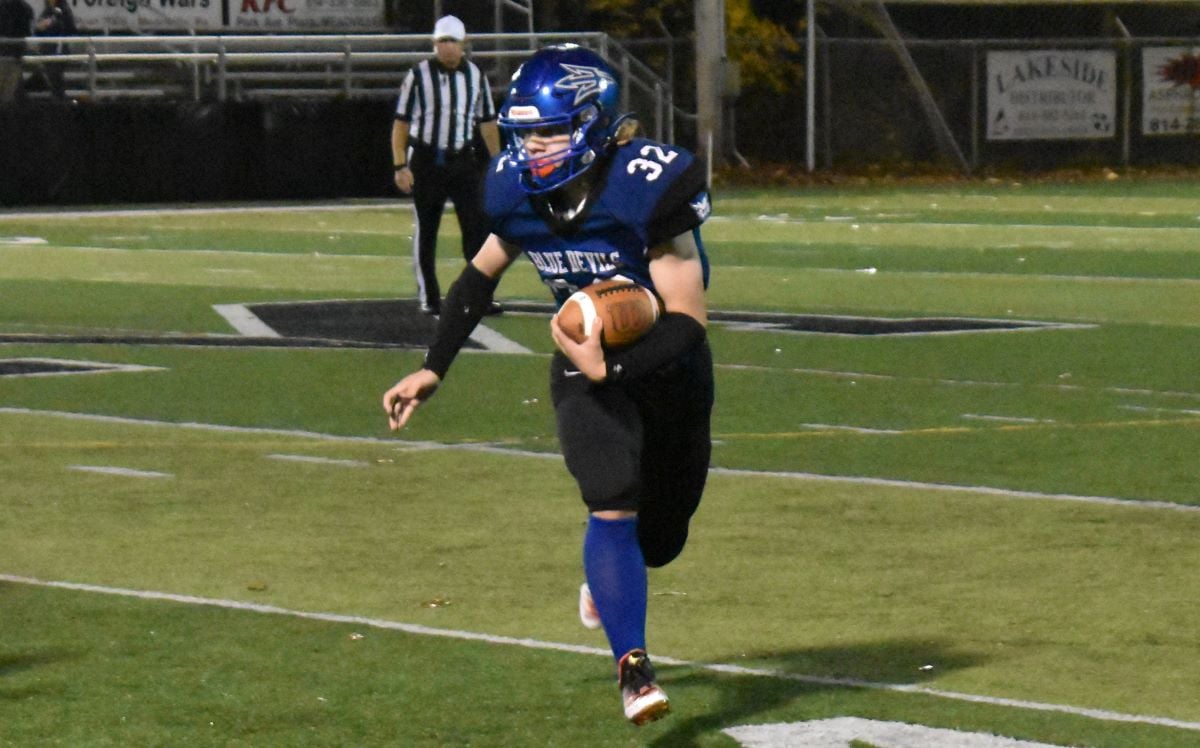 Cambridge Springs' Brett Kania rushed for 95 yards and a pair of touchdowns in the Blue Devils' 21-14 win over Mercer.

No. 4 Cambridge Springs built a 21-0 lead and held off a furious Mercer rally for a 21-14 win in the District 10 Class 1A quarterfinals Saturday from Meadville’s Bender Field.

The win sets up a semifinal date with top-seed Eisenhower next week.

“This feels pretty good,” said Cambridge Springs’ Van Jones. “We played our butts off tonight. Coaches got us prepared and we came out and executed.”

It was Jones’ first down run that allowed Cambridge Springs to run the clock after No. 5 Mercer’s Daemyin Mattocks scored on an 18-yard run with 3:32 remaining in the fourth quarter, capping a 90-yard drive. He also added the 2-point conversion to make it 21-14.

Mattocks 18-yard TD run. He also runs in the 2-point conversion and we have a one score game. Cambridge Springs 21, Mercer 14, 3:23 4Q pic.twitter.com/YXScPpiyO4

The win was the second this season for the Blue Devils over the Mustangs. The first was a 32-22 win just a couple of weeks ago on Oct. 21.

It was all Cambridge Springs early, with the Blue Devils scoring on two of their three first-half drives. Their final drive of the half ended on the Mercer 42 as time expired in the first half.

Freshman Brett Kania was featured heavily in the Blue Devils’ attack, rushing 13 times for 95 yards. He put the finishing touches on Cambridge Springs’ opening drive with a 6-yard scoring run. It was a drive that was set up by Jones’ long punt return down to the Mercer 32.

Mercer drove the ball down to the Cambridge Springs 20 on their ensuing possession, but the Blue Devils were able to force a turnover on downs.

Cambridge Springs proceeded to march 89 yards, taking over seven minutes off the clock on a drive that ended with Jones’ 7-yard touchdown run.

“It was huge,” said Liberty about jumping out to the first-half lead. “Last game it was them up 14-0, and our biggest thing this time was that we wanted to flip it. We had multiple kids touching the ball, multiple kids doing their thing, I love it.”

That 14-point lead was extended to 21 after Kania scored his second touchdown of the game, a 15-yard run that was the exclamation point on a 50-yard drive.

Mercer’s defense stiffened after that, however, and the running game got going.

The Mustangs actually outgained the Blue Devils in the game, 272-230, with Mattocks getting them on the board with his 4-yard touchdown run that made it 21-6 with 1:29 to go in the third quarter.

Mercer still had all three timeouts left when Cambridge Springs got the ball back after Mattocks’ second score, but the Blue Devils picked up a trio of first downs to seal the deal.

“My respect for coach Lockard, you know I wanted to run that one in at the end because that’s happened to us before, but we have a ton of respect for Mercer. They are a great football team and have a great coaching staff.

Mercer quarterback Nate Haines eclipsed 100 yards rushing on the game with 106 on 19 carries, while Mattocks finished with 69 and Nic Michael 41.

Jones added 37 yards rushing and 25 yards receiving, while Ethan Counasse also had 27 yards receiving for the Blue Devils. Morgan Applebee was 6-of-9 through the air for 65 yards.

Cambridge Springs will now turn their attention to Eisenhower, which beat them 27-14 back on Sept. 2.

“We’re going to celebrate this one and get back to the board on Sunday,” Liberty said.

The Tigers built a 21-7 lead after the first quarter en route to the win, setting up a date with No. 2 Reynolds in the semifinals next week.

Gilberto scored on runs of 2 and 1 yards in the first quarter, and A.J. Proper also scored on a 10-yard run for the Tigers on their opening drive of the game. All three extra points were kicked by Sadie Thomas, who earlier in the day had 22 kills in Maplewood volleyball’s D10 title game victory over Cochranton.

Lakeview’s Cameron Pence scored on a 2-yard run in the first quarter, with teammate Mitchell Tingley taking over in the second quarter.

It was more of Tingley to start the third quarter, as he scored on a 13-yard run on the Sailors’ initial drive of the half to give them a 24-21 advantage.

That lead proved to be short-lived, however, thanks to Gilberto. He broke free for a 49-yard touchdown run less than a minute later to give Maplewood the lead back, and his 6-yard scoring run with just over two minutes remaining in the third quarter made it 33-24.

That proved to be the final score of the game.

Pence finished with 190 yards in the air but did throw three interceptions. Tingley also threw an interception, with Ethan Peterson and Proper notching two INTs each for the Tigers.

ERIE, Pa. – Jesse Jong’s 10-yard touchdown run with 1:11 remaining lifted Mercyhurst Prep to a 21-14 win over Wilmington in the D10 Class 2A quarterfinals.

The Lakers trailed 14-13 when Jong scampered into the end zone. He also added the two-point conversion run. The drive was set up by a Stephen Grayson interception.

Wilmington got the ball back and drove down to the Wilmington 13, but Tuff McConahy’s last ditch pass attempt was broken up by Jeremy Ganska to seal the deal for the Lakers.

It was a back-and-forth affair that saw Wilmington take a 14-7 lead on Buddah Book’s 14-yard touchdown run with 18 seconds to go in the third quarter.

The Lakers got within one, 14-13 on David Bahm’s 13-yard touchdown pass to Josh Wingenbach, but the extra point was blocked.

Wilmington’s defense did everything in its power to try and get the win, forcing three interceptions.

WATERFORD, Pa. – Ryan Miller had a big game for Seneca, rushing for five touchdowns, three of which came in the first quarter, as the Bobcats rolled to a 46-13 win over Northwestern in the Class 2A quarterfinals.

Northwestern got on the board courtesy of a Lloyd Fountain 17-yard run to make it 21-7, but Nolan Seabury answered two minutes later with a 3-yard touchdown run to make it 28-7, which was the halftime score.

Miller scored his fourth touchdown of the game to make it 34-7 in the third quarter.

After Fountain’s 60-yard touchdown pass to Ben Campbell made it 34-13 with just over seven minutes to go in the fourth quarter, Miller put the finishing touches on his night with his fifth touchdown of the game.

With the win, Seneca advances to play top-seed Farrell in the semifinals next week.