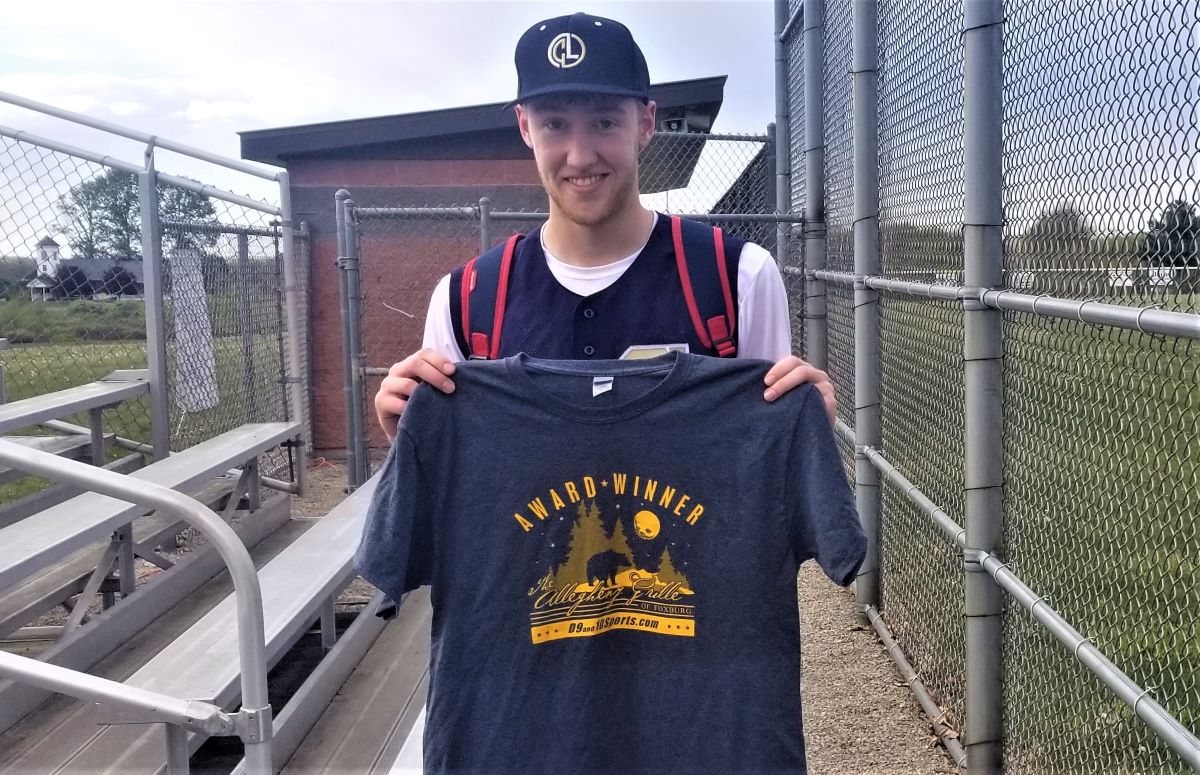 STRATTANVILLE, Pa. – Hayden Callen struck out 14 and drove in a run to lead Clarion-Limestone to an 11-4 win over visiting Karns City.

Callen, who was named the Allegheny Grille of Foxburg Player of the Game, gave up four runs, three in the second inning when he hit two batters and allowed two runs to score via wild pitches while allowing five hits and hitting three batters.

“My fastball, for sure,” Callen said when asked which pitch was working best for him. “(I was) moving it around, hitting my spots, which I kind of struggled with tonight. Just having a second pitch, like a curveball, helps.”

Callen struck out the side in three innings, including in order in the fourth.

Watch Callen strikeout the side in the fourth inning

The only real blip for the senior right-hander came in the second innings when, with one out, Hunter Troutman singled and then Jacob Callihan and Mitchell Waldroup were hit by pitches loading the bases. Callen then threw two wild pitches allowing Troutman and Callihan to score, and then Cole Sherwin singled home Waldroup making it 3-2 Gremlins at the time.

“I was trying out a new pitch tonight,” Callen said about the hit batters. “That was probably it.”

C-L manager Todd Smith visited Callen on the mound, and the C-L senior said his coach told him to scrap the new pitch.

“He said stick to my usual, which I did,” Callen said. “Everything clicked.”

After the Sherwin RBI single, Callen retired eight in a row, including six strikeouts, and 17 of the final 19 he faced.

Karns City did get a run off him in the fifth when Sherwin singled leading off, went to second on a wild pitch, and scored on a two-out Michael Neff single.

But by that time, the Lions had eight runs thanks to a two-run first, a run in the second, two in the third, and three more in the fourth.

Bryson Huwar started the scoring with an RBI double in the first, and it was one of three doubles on the day for Huwar, who was 3-for-3 with a walk, two runs scored, and two RBIs.

Huwar’s leadoff double in the third inning, with the game tied, at three, started a string of three straight two-base hits by the Lions, as Callen and Jordan Hesdon followed with doubles to give C-L the lead for good, 5-3.

After Karns City cut the lead to 8-4 with the run in the fifth, the Lions had some two-out magic in the bottom of the inning.

Jack Craig, who scored twice in the game out of the No. 8 hole, came up with a two-out single to right, and Jake Smith, who was 3-for-3 with three runs scored, followed with a single to left. Tommy Smith, who went 3-for-3 with three runs scored and an RBI, then drove home a run with a single, and Corbin Coulson tripled on a ball misjudged by the right fielder to right scoring two more to make it 11-4.

Coulson was 2-for-4 with a run scored and four RBIs.

Sherwin paced Karns City going 2-for-4 with a run scored and an RBI.