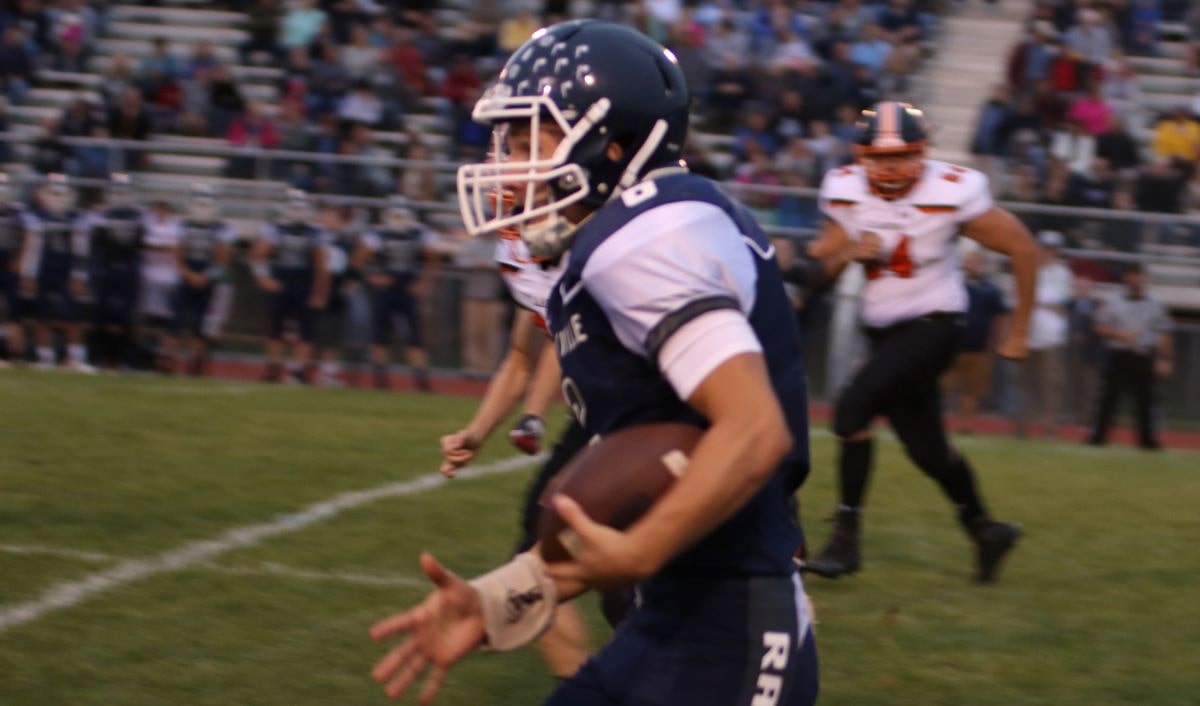 The Raiders (3-0) led 25-0 by halftime and put the Mercy Rule running clock into motion after Kyle MacBeth’s 45-yard touchdown run to put them up 38-0 with 4:34 left in the third quarter. MacBeth had two of the Raiders’ interceptions, ran for 53 yards on four carries and caught five passes for 48 yards with a touchdown.

Jack Krug completed 26 of 37 passes for 271 and four TDs, two going to Brayden Kunselman covering 25 and 18 yards. Kunselman caught eight passes for 102 yards. Robert Keth caught six passes for 85 yards with a 16-yard TD reception along with returning the Raiders’ sixth interception of the game 43 yards for the final points.

Nathan Taylor also had two interceptions while Elliott Park had two of the Raiders’ four sacks.

Karns City quarterbacks Eric Booher and Brayden Christie combined to complete 3 of 18 passes for 18 yards. The Gremlins (2-1) ran 44 plays for their 74 yards.

WEST SUNBURY, Pa. – Central Clarion scored 20 unanswered points in the fourth quarter to pull away with a 46-14 win over Moniteau.

Cal German completed 17 of 33 passes for 425 yards and five touchdowns. Ethan Burford accounted for most of that, catching seven passes for 246 yards and three TDs.

But the Wildcats (2-1) only led 26-14 going into the fourth quarter before Cutter Boggess scored two of his three TDs on runs of 1 and 36 yards. Sandwiched between those runs was German’s 37-yard TD pass to Hunter Craddock.

German hit Burford for two first-quarter TDs of 15 and 85 yards and a 60-yarder to start the third quarter. German’s threw a 26-yard TD pass to Boggess in the second quarter. Boggess ran for 45 yards on four carries and caught five passes for 66 yards.

BROCKWAY, Pa. – Keystone scored three times in the final 4:23 of the first half to break open a scoreless game on its way to a 28-0 win at Brockway.

Nick Weaver scored twice – once on a 14-yard run and then again on a 41-yard pass from Bret Wingard – to give Keystone (2-1) a 14-0 lead with 53.5 seconds left in the half before Keenan Heeter returned an interception 58 yards on the final play of the half to make it 21-0 at the break.

Taylar Altman then found the end zone on a 15-yard run early in the fourth quarter to set the final score.

The Keystone defense twice stopped Brockway (0-3) after the Rovers had moved inside the Panthers’ 10-yard line first getting a stop on downs and then getting an interception in the end zone from Steven Shetler.

Weaver ran 12 times for 97 yards and caught one pass for 41 yards, while Wingard was 5 of 13 passing for 72 yards, the touchdown and an interception. Heeter caught two passes for 38 yards and ran twice for 27 yards, and Altman ran nine times for 33 yards.

Ezra Swanson ran 12 times for 35 yards for Brockway with Conner Ford going 6 of 13 passing for 61 yards and an interception and freshman Andrew Brubaker going 2-for-13 for 65 yards and a pick. Ben Glasl caught three passes for 45 yards with Austin Schmader catching three for 42 yards and also blocked a punt.

Coudriet was 20 of 38 passing for 207 yards but also threw two interceptions.

Zuke Smith was 17 of 44 passing for 135 yards with a touchdown and an interception. His scoring pass went to Harley Morris (5 catches, 36 yards), while Ricky Zampogna also had eight grabs for 74 yards. Smith added 10 carries for a team-high 31 yards, but Kane ran for just 27 yards on 21 carries.

RIMERSBURG, Pa. – Tanner Merwin had a total of 197 yards on offense and accounted for three of Union/A-C Valley’s seven scores in their 45-0 victory over visiting Curwensville.

Merwin rushed nine times for 62 yards with runs of two and 12 yards that went for scores while going 10 of 12 for 135 yards in the air with an 18-yard passing touchdown to Karter Vogle.

Caiden Rainey led the Falcon Knights (3-0) run game with seven carries for 100 yards and a score (12) while also leading the receivers with four catches for 74 yards.

Merwin and Rainey talked about the win.

The Falcon Knights scored on their first four offensive possessions and built up a 25-0 lead that stuck through halftime.

Union scored on their following two offensive drives out of the half to make it 39-0 in the third quarter with a 16-yard touchdown catch by Vogel and a 12 yard run by Merwin.

Gaven Bowser capped off the Falcon Knights scoring for the night with a 13-yard run to make it 45-0 late in the fourth quarter.

Ty Terry was the leading receiver for the Tide with eight receptions for 58 yards while Thad Butler led the run game with six carries for 20 yards.

SMETHPORT, Pa. — Noah Lent ran for three touchdowns and threw for two more to lead the Smethport Hubbers to a 39-6 win over visiting Elk County Catholic.

Lent ran for 146 yards on 12 carries and scored on runs of 35, 15 and 35 yards, the last one sending the PIAA Mercy Rule running clock into motion with the Hubbers (2-0) up 39-0 at the 3:31 mark of the third quarter. He completed 8 of 13 passes for 92 yards, hooking up for TD passes with Richie McDowell from two yards out and Ryli Burrett for 15 yards.

Sam Kaul ran for an 89-yard TD in the fourth quarter for the Crusaders (1-1), finishing with 101 yards on seven carries.

EMPORIUM, Pa. – Coudersport scored three times on special teams and defense on its way to a 45-0 win at Cameron County.

Cale Ayers twice recovered blocked punts for scores for the Falcons (2-0), while Gavyn Ayers returned an interception for a score.

That only told part of the story of the Elker (2-0) defensive effort, however, as they limited the Owls to 26 yards of total offense and one first down.

Cameron Marciniak, Dominic Cherry, Domenic Allegretto and Cole Casilio all scored rushing touchdowns for the Elkers, who also got a 40-yard punt return for a touchdown for Luke Zimmerman.

Ben Briggs threw for 101 yards and a 13-yard touchdown to Michael Gresco.

Nate Girdlestone scored on a 7-yard fumble return for Bradford (0-2) in the fourth quarter, as did Elijah Fitton for the Owls on an 80-yard kickoff return.

Hays completed 6 of 8 passes for 76 yards while Henery ran for 91 yards on nine carries. Kot caught four passes for 67 yards and intercepted a pass along with Braxton Adams. The Beavers, who received a forfeit win last year, won on the field for the first time since topping Brookville, 16-7, on Oct. 26, 2018, a span of 12 games not counting the forfeit win over Erie High.

Zeke Bennett ran for 67 yards on 23 carries for the Chucks, whose losing streak increased to 19 games.

District 10 Football Recaps: Maplewood, Corry win in overtime
GoFundMe Page Set Up for McDowell Football Player Johnny Heubel
This website or its third-party tools process personal data.In case of sale of your personal information, you may opt out by using the link Do not sell my personal information.
×
Manage consent