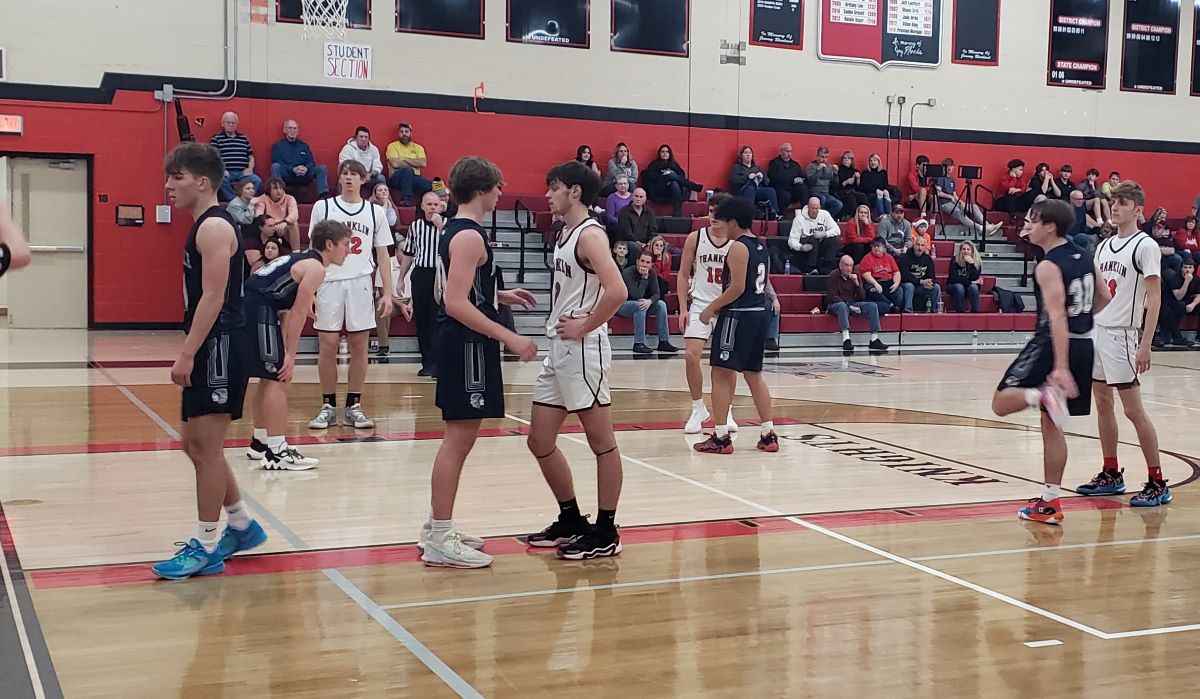 “Coming into the season 3-2 (Brookville’s record heading into the game), that hasn’t really happened before for us Raiders,” Jack Pete, who had 14 points and nine rebounds said. “To pull out a win tonight and get back on track is huge.”

“It was very important to get this win,” Brookville head coach Dalton Park said. “I didn’t want us to lose confidence. We wanted to keep building and get our confidence back. This was a big game.”

Brookville got its confidence back by playing as a unit.

The game was everything it was billed to be for a half with Franklin using three first-quarter 3-pointers to take a 14-13 lead into the second quarter before Brookville fought back with a 9-0 second-quarter run to go ahead 29-23 at halftime when Noah Peterson drilled a 3-pointer with 11.2 seconds left in the half. That triple came after Brookville had stalled the ball for over a minute. Franklin was more than happy to let the Raider play stall-ball with both teams in foul trouble at the time.

The teams then exchanged baskets to begin the second half with a hoop from Franklin’s Ethan Owens putting the score at 31-25 Brookville 47 seconds into the half.

But Clayton Cook answered on the other end for the Raiders starting a 6-0 spurt that blossomed into the 14-5 run. That run ended with Brookville scoring the final eight points to take a 45-30 lead on a Kellen Haines 3-pointer with 2:50 to play in the third quarter.

“Defensively, we were playing pressure defense looking for steals, just looking for them to turn the ball over,” Pete said. “On offense, we were just being patient, getting everybody the ball, not really caring who scored, just getting the whole team involved.”

Everyone was involved with four different Raiders scoring during the run led by four points from Cook and three each from Haines and Peterson.

That showed in the final scorebook as well with five Brookville players scoring between seven and 14 points.

“When we come together, we just share the ball,” Pete said. “It doesn’t matter who scores. We can do great things as you saw tonight.”

“Our drives were there, and Clayton was making his inside shots,” Park said. “It all fed together.”

As mentioned above, Franklin hurt Brookville early on with the long ball with Damon Curry, Aidan McCracken, and Jalen Wood each hitting first-quarter threes, and Curry hitting a triple at the start of the second quarter to put the Knights up 17-13.

But after hitting those four 3-pointers in the game’s first 8 ½ minutes, Brookville limited the Knights to just two the rest of the game, including only one in the second half.

“Our guys were sagging back into the lane instead of coming straight across when they were one pass away,” Park said. “They would throw it one pass away, and now we had to close out 10-12 feet. We did less sagging back and more side movement, getting a hand up in their face. We wanted to play a little tighter, and try and contest the shots a lot more.”

Franklin made one push at the Brookville lead at the start of the fourth quarter cutting the Raider’s lead down to 10, 49-39, thanks to a full-court press.

But Brookville was able to stabilize and hit five foul shots in the final three minutes to close out the victory.

“I think Friday’s game helped us,” Park said. “Like I told them Friday night, it’s not a loss if you can take something from this game and learn from it. I believe we learned from Friday night;’s game not to get panicked. Today we weren’t panicked.”

Curry led Franklin (3-3) with 23 points and five rebounds but was the only Knight to reach double digits. Wood added seven points, while Owens had a team-high seven rebounds.

Brookville is back in action Wednesday when it hosts St. Marys, while Franklin hosts Farrell Thursday.

Dowell, Nelson Help Port A Girls to OT Win; Benninger Key for Ridgway Boys in Win at Bradford (Dec. 19, 2022 D9 Recaps)
Dec. 20, 2022 District 9 and District 10 Basketball Schedules Powered by Hunter’s Station Golf Club
This website or its third-party tools process personal data.In case of sale of your personal information, you may opt out by using the link Do not sell my personal information.
×
Manage consent