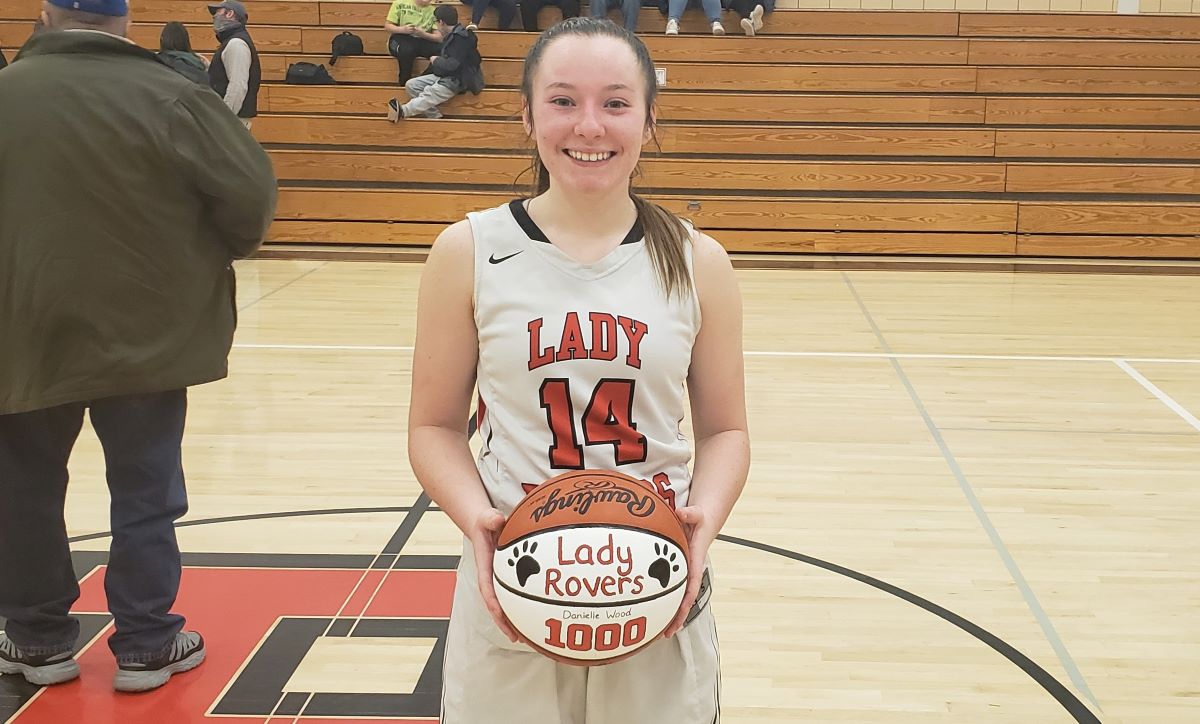 BROCKWAY, Pa. – Danielle Wood knew there was an outside chance she could reach 1,000 career points when Brockway hosted Johnsonburg Wednesday night.

Wood needed 28 points to reach the milestone, and she said she thought it would be nice to reach it at home.

The Lady Rover senior scored exactly 28 points to become the fifth Brockway girls’ player to reach 1,000 career points in a 52-31 win over the visiting Ramettes.

“Coach told me yesterday at practice,” Wood said. “He was like ‘hey, you are 28 away.’ I think the next game we play is away. So we were like let’s try to get it at home. So, I went out there and tried to get it.”

The milestone came when she connected on a free throw at the back end of an old-school 3-point play with 3:27 left in the game.

Watch the play unfold from her layup off a Selena Buttery pass to the made free throw and the ensuing on-court celebration.

“It’s really cool,” Wood said. “This was one of my goals this season. To get it halfway through is pretty nice.”

Wood, who entered the game averaging 18.5 points per game, retook the D9 scoring lead with her 28-point outburst which pumped her average to 19.2 ppg. But she is more than just about scoring, ending her milestone night with six assists and six steals as well.

“It’s really important,” Wood said of the other aspects of her game. “I know if I am not shooting, I can do other things to help my team win. That is what I have been more focusing on. I know I can score.”

Wood’s coach, Dick Esposito said getting to 1,000 points is a credit to her hard work.

“Danielle has worked very, very hard with her limited height, as you can see, being 5-3, 5-4,” Esposito said. “She’s learned in the last year or so to try and get to the foul line more by driving to the basket. But she does have a deadly 3-point shot. Today, she wasn’t taken it. She decided to go for the hoop.”

The highest praise Esposito could give Wood is that other players want to copy her style of play.

“For us, a lot of kids emulate her,” Esposito said. “They want to be like her. They know they don’t have the size. I have a couple of girls who went her to teach them how to be a ballhandler. What more can you ask?”

Wood wasn’t the only Lady Rover to hit a milestone mark.

Fellow senior Selena Buttery grabbed 14 rebounds to give her 902 in her career. She just set the school record for rebounding in a win over Karns City Saturday. Buttery had a double-double in the contest adding 16 points, including 13 in the first half to help the Lady Rovers to a 32-14 halftime lead.

That lead was built on the strength of a 22-9 first-quarter advantage that saw the Lady Rovers go on an 11-0 run after Johnsonburg scored the game’s first four points.

Wood had 10 points and Buttery eight while hitting a pair of 3-pointers, in the opening eight minutes.

Kacie Stelene had nine points and 13 rebounds for Johnsonburg with Annasophia Stauffer leading the Ramettes with 10 points.