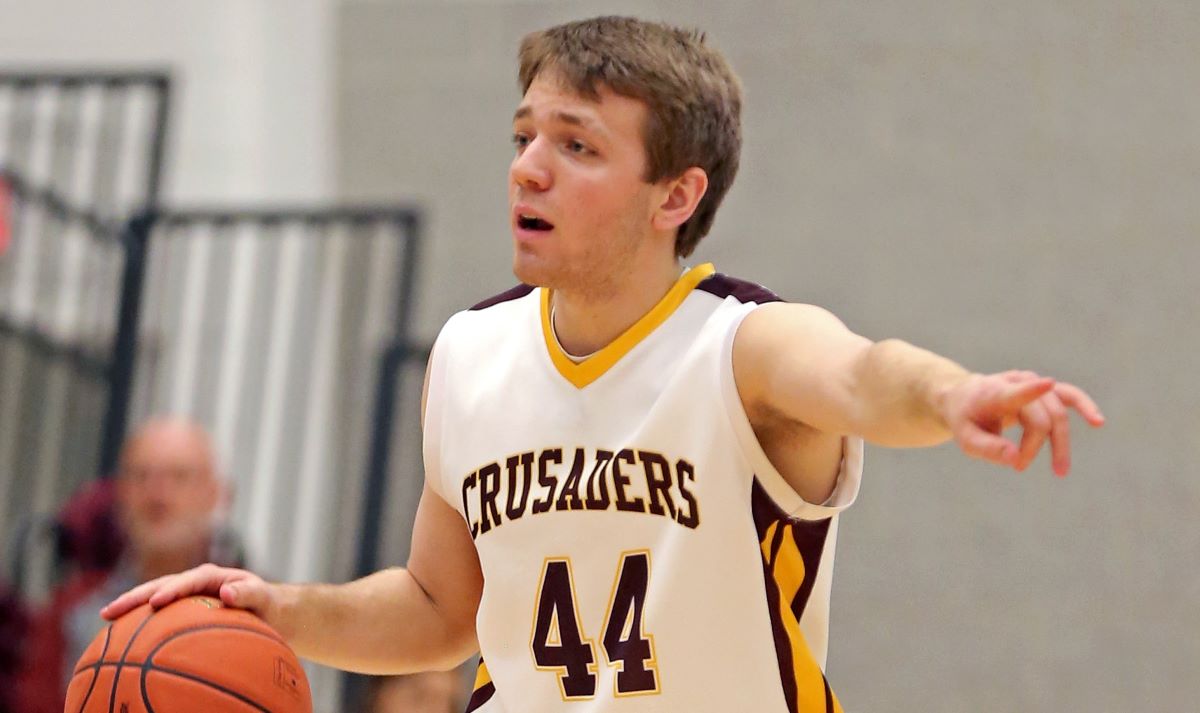 Charlie Breindel of ECC scored a career-high 28 points to lead the Crusaders into the PIAA quarterfinals. Photo by Paul Burdick. Check out more of Burdick's work here

“I had a little bit of help,” Breindel, who scored 26 of his 28 points from the second quarter on, said. “I had my AAU coach there. He has been telling me all year to shoot the ball. I had these coaches (ECC’s coaches) giving me confidence all year. Once I felt it go in once, I knew could find it.”

Breindel’s output over the last three quarters mirrored that of his team, which rallied from a seven-point deficit at the end of the first quarter to get the win.

ECC was losing 21-14 after eight minutes only to hold Farrell to 1 of 14 shooting in the second quarter and 9 of 42 over the last three quarters. This after the Steelers shot 9 of 13 in the first quarter to build the early lead.

“We got outworked in the second quarter,” Farrell head coach Myron Lowe said. “We just stopped working. I think they got comfortable, started settling for shots. But we have to work in that second quarter. That was the turning point in the game. It was a killer.”

As Farrell was going cold, ECC was heating up.

The Crusaders shot 15 of 23 from the floor over the final three quarters after going 5 of 13 from the field in the first quarter.

“What I think was the most impressive thing about tonight is when they scored 21 points and they looked like world-beaters, we didn’t flinch,” ECC head coach Aaron Straub said. “I think that is a real credit to our team. We beat a really good team. They are a good team. They have some tremendous athletes. Their point guard (Lamont Samuels) is one of the best players in District 10. He played that way tonight.”

Breindel, of course, was a big part of that.

His 3-pointer with 3:16 to go in the second quarter gave ECC a 24-23 lead. It was a lead the Crusaders never relinquished.

Breindel scores on a second-half layup

They led 26-25 at halftime – Farrell’s lone second-quarter basket came from Kabron Smith with about 16 seconds left in the half.

“They play smart as a team,” Lowe said. “They take care of the ball. They don’t turn the ball over. (Breindel) had a couple of big shots. It kind of spread the lead out a little bit.

Breindel played a key role during the start of the third quarter as well scoring 12 of the 18 points during the run.

Farrell was able to get back within eight, 46-38, going to the fourth quarter, but ECC’s free-throw shooting – the Crusaders were 11 of 14 in the quarter – didn’t allow the Steelers to get any close.

While ECC (24-5) was hitting its foul shots late, Farrell was missing some crucial charity attempts that would have helped them get back in the game.

“We’ve been having that struggle all year,” Lowe said. “I told them, one of these games it’s going to kill us. Today was one of those days.”

Samuels led Farrell with 19 points. He was on fire early scoring eight in the first quarter.

Samuels scored on a first-half jumper

ECC moves into the PIAA quarterfinals where it will play WPIAL runner-up Union (New Castle) Tuesday at a site and time to be announced. Union beat District 6 champion Bishop Carroll, 49-28.

It marks the 11th time in school history the Crusaders will play in the PIAA quarterfinals but only the second time since 2009 (2017 was the other time).

“It may not have been expected by everyone, but (it was) definitely expected by our team,” Breindel said. “In the offseason, we put in a ton of work. We feel like we deserve to be here.”

For Farrell, it was a disappointing ending to an otherwise great campaign in Lowe’s first season on the bench at his alma mater. He was just the second rookie head coach in school history to win a District title joining Tudor Lewis (1938).

“It was not the ending we expected,” Lowe said. “We wanted to go all the way. But, I am proud of the guys. They fought hard from the beginning to the end. Earlier in the year, we were a little sluggish, an up-and-down rollercoaster. We went on about an eight-game win streak. We had a couple of games at the end we lost, but all in all, they had a great year.”

KITTANNING, Pa. – WPIAL champion Bishop Canevin scored early and often in picking up a 68-33 win over District 9 runner-up DuBois Central Catholic in the second round of the PIAA Class 1A boys basketball playoffs at Armstrong High School.

The Crusaders (22-4) led 27-10 at the end of the first quarter and 48-18 at halftime meaning the entire second half was played under the PIAA Mercy Rule.

With the clock running, DCC (19-9) scored just two points in the third quarter and trailed 57-20 by the end of the quarter.

Bishop Canevin will face WPIAL fourth-place finisher Imani Christian, a 92-51 winner over Williamsburg, in the quarterfinals Tuesday at site and time to be determined.

Gill, Palmer, Reinsel, Pierce, Karpinski to Wrestle for PIAA Class 2A Gold; VanDee, Smith in 3A Semifinals
March 12, 2022 District 9 and District 10 Basketball Schedules Powered by Hunter’s Station Golf Club
This website or its third-party tools process personal data.In case of sale of your personal information, you may opt out by using the link Do not sell my personal information.
×
Manage consent