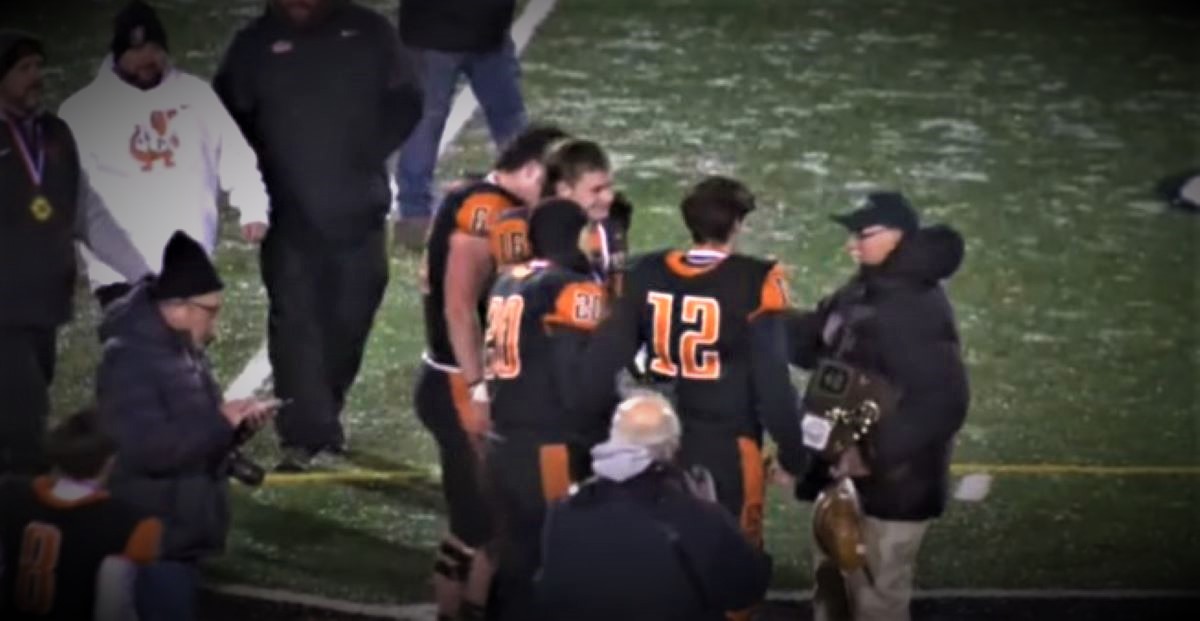 BRADFORD, Pa. – Trailing by seven going to the fourth quarter, top-seeded Port Allegany got a pair of Noah Archer touchdown runs to claim its first District 9 football title in 10 years with a 21-14 win over third-seeded Brockway at Parkway Field in Bradford.

“Sometimes you have supreme talent, are able to win games, and have some fun,” Port Allegany coach Justin Bienkowski said. “This team has been built from the ground level, and these seniors have been able to bring our program to the top. Through blood, sweat, and tears, they’ve earned it. This is what we’ve worked for. It’s a jubilant locker room right now.”

Brockway, which trailed 7-0 midway through the second quarter took a 14-7 lead on a 44-yard Jendy Cuello touchdown run with 3:15 to play in the third quarter.

“There was no element of freak out, our kids were calm,” Bienkowski said.

But Port Allegany answered on the subsequent drive with a 6-yard Archer scoring run with 10:30 to play. The Gators elected to go for the lead and took it on a trick play with Archer taking the direct snap and doing a jump pass to Peyton Stiles to give Port Allegany a 15-14 lead.

“With our backs up against the corner, Noah Archer did Noah Archer things,” Bienkowski said. “We went for two and got. It’s a good night to be a Gator.”

Brockway got the ball back just inside Port Allegany territory on the ensuing kickoff and moved to the Gators’ 29-yard line where it faced a fourth-and-2.

A Port Allegany player then appeared to jump offsides (in high school football you are offside as soon as you cross into the neutral zone, there is no chance to get back onside like there is in college and the NFL) but the officials either missed the call or believed the player hadn’t crossed into the neutral zone. Then, to make things worse for Brockway, a Rover was called for a false start when he stood up thinking it was an offside penalty.

Backed up to a fourth-and-7 from the 34, Brockway still went for it. But a Brayden Fox pass was incomplete giving the ball back to Port Allegany.

“Brayden Fox isn’t sneaking up on anybody, we knew we had to take away that passing game, try to make Fox feel uneasy,” Bienkowski said. “We made one more play than they did. They schemed for any adjustment we made. That’s a well-coached team.”

The Gators took advantage when Archer found a seam and went 57 yards for a touchdown. The extra point was no good, but Port Allegany led 21-14 with 6:20 to play.

On Brockway’s next, and what turned out to be its final possession, the Rovers faced a third-and-9 from their own 43 when Braylon Button sacked Fox back at the 37.

Facing fourth-and-15 with four minutes left, Brockway decided to go for it. But a deep pass by Fox was broken up by Archer around the Port Allegany 45-yard line.

The Gators then picked up a pair of first downs to run out the clock on their first title since 2012.

Both teams took a while to find a rhythm offensively, and the defenses played “bend, but don’t break” through a scoreless first quarter.

Blaine Moses opened the scoring two minutes into the second quarter. Moses took the pitch on an option from Drew Evens, found a seam to the sideline, and sprinted 38 yards to the end zone to give the Gators a 7-0 lead.

A Peyton Stiles 37-yard run on a reverse set the Gators up in Rovers territory late in the second quarter. He then took a pass down inside the 10 later in the drive. Port Allegany thought they had taken a 2-score lead on Noah Archer’s 8-yard reception on third down, but a holding penalty took the points off the board.

An incompletion on third down set up a fourth-and-goal from the 18. As Evens dropped back to pass, Aiden Grieneisen and Reese Yahner came flying into the backfield. Evens tried to flip the ball out to avoid a sack but was called for intentional grounding and the Rovers took over on their own 33 with 2:22 to play.

Fox, who had completed just one of his 10 pass attempts to that point, connected with Andrew Brubaker and Alex Carlson for 17 and 20 yards, respectively, to get the ball inside the Gators’ 30. Another 13-yard completion to Brubaker moved the Rovers down to the 12 with 54 seconds to play in the first half.

On second down, Fox escaped the pocket and rolled left. Just before stepping out of bounds, he threw a jump ball to the end zone. Carlson came down with it to tie the game at 7-7 heading into halftime.

Fox finished the game 7-23 for 92 yards with a touchdown and an interception. Cuello ran 22 times for 124 yards and a score. Alex Carlson had four catches for 54 yards and a touchdown.

Evens was 7-11 for 59 yards and also ran eight times for 20 yards. Archer ran 20 times for 150 yards and two scores, had four receptions for 33 yards, and threw a 2-point conversion pass. Moses had 16 carries for 98 yards and a touchdown.

Port Allegany will face the District 10 champion, Reynolds or Eisenhower (the game will be played at 1 p.m. on Saturday and will be available on the YDL Sports Network), in the PIAA quarterfinals at a time, date, and location to be determined.

“We’re gonna get together tomorrow and watch the game, but enjoy tonight,” Bienkowski said. “Champion vs champion, it should be fun.”

For now, the Gators will enjoy their championship victory before turning their attention to next week’s opponent.

“This is more than a win, it’s an opportunity to spend seven more days together,” Bienkowski said. “Our goal was to be practicing on Thanksgiving and the only way to do that was to win the championship.”

BREAKING NEWS: Grove City Defends D10 3A Crown with Win Over Slippery Rock
Watch Live: District 10 Class 1A Football Championship: Eisenhower v Reynolds
This website or its third-party tools process personal data.In case of sale of your personal information, you may opt out by using the link Do not sell my personal information.
×
Manage consent