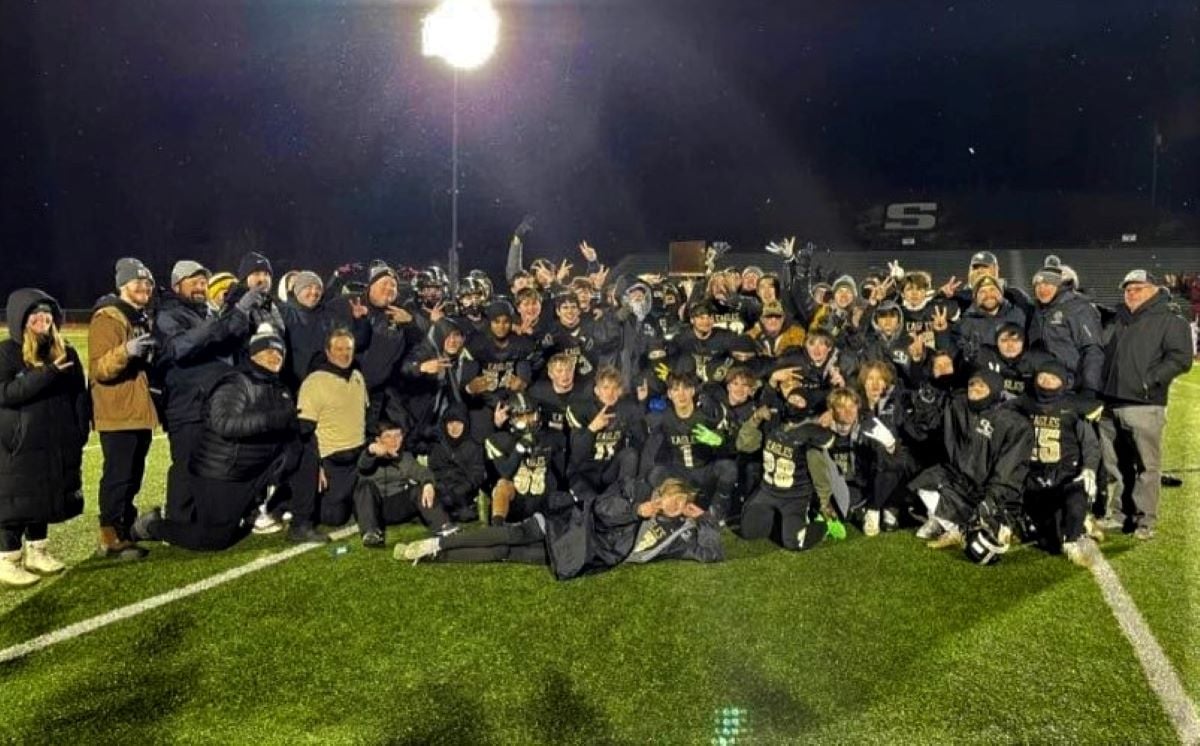 The backbreaking score may have been a 61-yard Gavin Lutz punt return for a touchdown with 38 seconds to play in the first half that gave the top-seeded Eagles a 21-17 halftime lead.

That was quite the turnaround from about 10 minutes earlier when sixth-seeded Slippery Rock appeared to be in control of the game going up 17-7 on a 33-yard Maddox Allen touchdown run on the first play of the second quarter.

But Grove City answered with a game-defining drive that took up just over five minutes. The Eagles went 86 yards in 12 plays scoring on a 1-yard Hunter Hohman run to get back within three, 17-14, midway through the second quarter.

With the halftime lead, Grove City poured it on in the second half thanks to a pair of Hohman touchdown runs and a defensive touchdown to go ahead 42-17 with just over nine minutes to play.

Grove City then pushed the lead to 35-17 early in the fourth quarter when Hohman scored again, this time from 31 yards out.

Any hopes of a dramatic Slippery Rock comeback were squashed on the Rockets next series when William Mokel fumbled at midfield with Anthony Nemec recovering the fumble and going 50 yards for another Grove City score and a 42-17 lead with 9:12 to go.

The teams traded scores in the first quarter with Slippery Rock getting a 21-yard Nick Kingerski field goal before Hohman scored on a 5-yard run for Grove City to put the Eagles in front, 7-3, with 6:41 left in the opening stanza.

But Slippery Rock got the game’s next two touchdowns with Sal Mineo scoring on a 1-yard run with 2:12 to play in the first quarter before Allen’s run made it 17-7.

The Allen touchdown was set up when Grove City had trouble on the kickoff return following the Mineo score going out of bounds at its own 7-yard line. That led to a three-and-out, and Slippery Rock took over at the Eagles 41-yard line.

But the game changed on the next drive when Grove City rode Hohman to the 86-yard scoring drive.

The junior quarterback carried the ball six times on the drive for 14 yards and was 4-for-4 passing for 65 yards. The big play was a 41-yard pass to the 1-yard time from Hohman to Gavin Lutz on a third-and-8 play setting up Hohman’s short TD run.

Hohman’s punting leg proved big on Grove City’s next possession when the Eagles took over at their own 2-yard line and moved only out to the 9. But instead of Slippery Rock, up three, getting fantastic field position the Rockets had to settle for getting the ball their own 47 after a 44-yard Hohman punt with 2:11 to play.

That proved big when the Rockets facing fourth-and-11 and Kingirski’s punt went just 15 yards where Lutz fielded it at the 39 and went the distance to the house for the go-ahead score.

It was more Hohman on the opening drive of the second half.

He ran three times for nine yards (one was a 5-yard sack) and was also 4-for-4 for 40 yards. The big play was another long pass, this one a 34-yard completion to Nathan Geer on third-and-12 that flipped field position taking the Eagles from inside their own 40 to the Slippery Rock 34-yard line.

Slippery Rock, which lost to Grove City, 22-21, in the regular season after also losing to the Eagles in last year’s D10 title game, got the game’s final score on an 8-yard Allen run with 3:45 to play. But that drive took almost five-and-half minutes to cover 80 yards leaving little time left to attempt any further comeback.

Where Grove City held the advantage was in third-down conversions (7 of 11 compared to 4 of 9) and in creating the game’s only turnover.

The Eagles have now won four D10 titles and will take on Central-Martinsburg, a 35-6 winner over Clearfield, in the quarterfinals either Friday, Nov. 25, or Saturday, Nov. 26.

Pizza Hut District 9 and District 10 Football Live Scoreboard – Week 13 2022 (Nov. 18-19)
BREAKING NEWS: Port Allegany Secures First D9 Football Title in a Decade with 1A Victory
This website or its third-party tools process personal data.In case of sale of your personal information, you may opt out by using the link Do not sell my personal information.
×
Manage consent