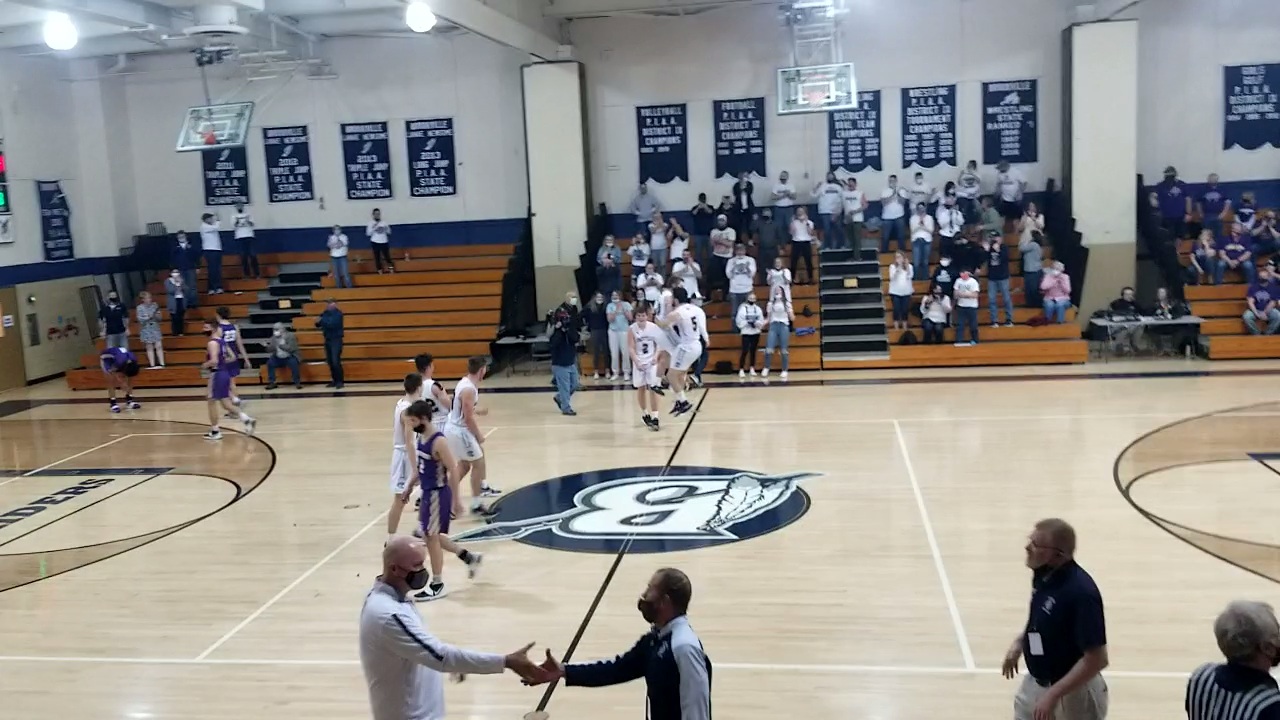 BROOKVILLE, Pa. – Hunter Geer’s jumper in the lane with 1:18 left broke a tie game and lifted Brookville into the PIAA Class 3A title game for the first time in school history with a 46-44 win over visiting Bishop Guilfoyle Tuesday night.

In a game in which the Raiders never trailed, Alex Wood tied the game at 43 for Bishop Guilfoyle with a basket at the four-minute mark.

Both teams had chances to break the tie before Geer, a junior, finally did.

Wood had a chance to retire the game when he was fouled taking a shot with 55.8 seconds left. But he missed the first free throw before hitting the second.

Bishop Guilfoyle had committed only four fouls, so it took the Mauraders a while to send the Raiders to the line.

When they did, Robert Keth missed the front end of a one-and-one.

Bishop Guilfoyle took timeout with 11.8 seconds left but Patrick Haigh missed a jumper from just inside the arc that would have put the Mauraders in the lead.

Brookville got the rebound, and the horn sounded with the Raiders celebrating. But the officials deemed that a foul had been committed by BG with 0.6 of a second left.

Geer hit the first free throw but missed the second. But before Bishop Guilfoyle could get the rebound and call timeout, the horn sounded again.

The officials left 0.6 of a second on the clock, and after a two timeouts, the Mauraders got the ball to Haigh, whose desperation 3-pointer from about 30 to 35 feet was short.

We will have much more on this game soon.

Live Links to Broadcasts of PIAA Semifinal Games Tuesday (Villa Maria Girls & Brookville Boys)
BREAKING NEWS: Villa Headed to 4A State Championship After Semifinal Win Over Delone Catholic
We use cookies on our website to give you the most relevant experience by remembering your preferences and repeat visits. By clicking “Accept All”, you consent to the use of ALL the cookies. However, you may visit "Cookie Settings" to provide a controlled consent.
Cookie SettingsAccept All
Manage consent