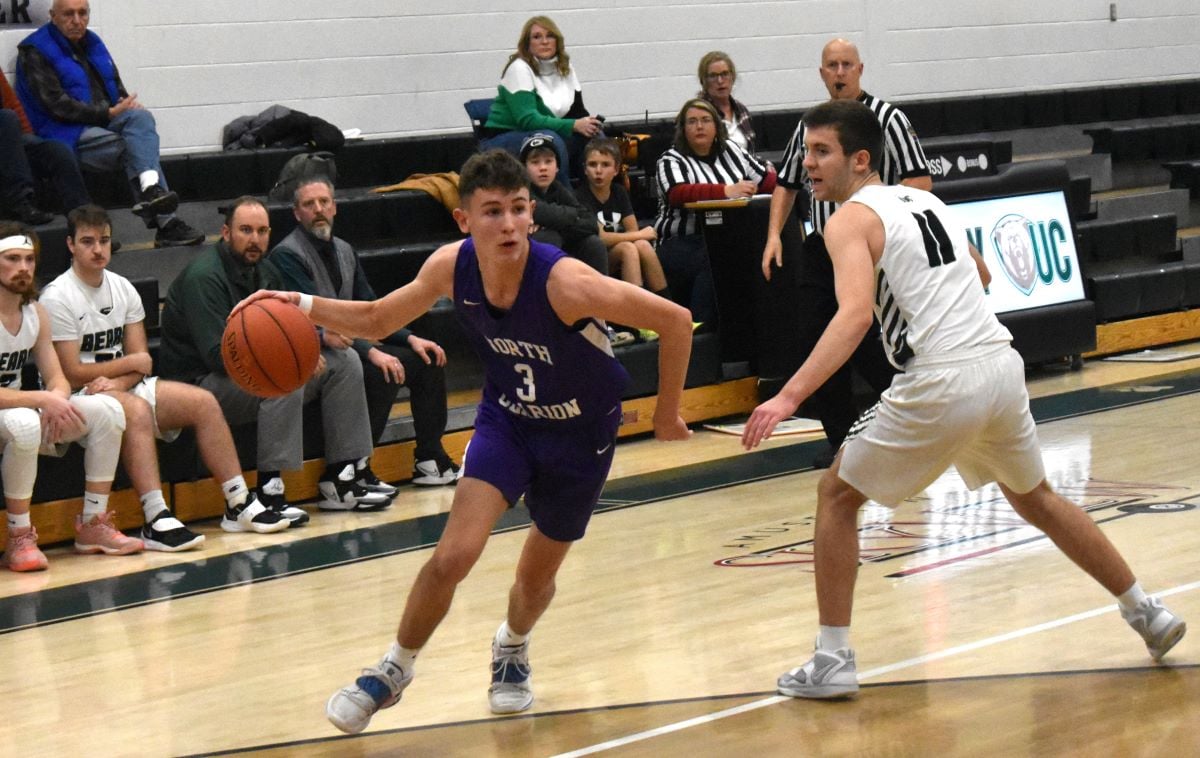 STRATTANVILLE, Pa. – Turning defense into offense most of the night, Clarion-Limestone sent a message to the rest of the KSAC Large School division with a convincing 68-55 win over previously unbeaten Karns City at C-L.

“This is huge,” C-L sophomore Jase Ferguson said. “We knew it was going to be a big game coming in. We knew we had to play hard, play fast, be scrappy on defense and get turnovers, and we would probably win the game.”

The game wasn’t even as close as the final score, as the Lions led by 22, 63-41, with just over three minutes left before putting in some reserves late.

The Lions’ defense was the catalyst behind the win causing at minimum 17 turnovers, including 14 steals.

“All of our players just work hard, all five guys,” Ferguson said. “We need all five guys working to have a good defense and get those turnovers. We were just working hard tonight to get those steals.”

Ferguson was a big part of the defensive effort with eight steals, including five in the third quarter. He also scored 14 points, six assists, and collected eight rebounds while being named the Daddy’s in Clarion Player of the Night.

Ferguson was one of five Lions to reach double digits on the night.

“A lot of teams we go against have bigger guys,” Ferguson said. “We have all fast guys. They can’t guard us all. (We) give it to the mismatch and take it to the hoop.”

Ferguson had five points during the spurt and Hesdon four.

The third quarter then proved to be the knockout punch.

A big part of the victory was C-L’s ability to limit Karns CIty’s top scorers – Taite Beighley and Micah Rupp.

Jacob Callihan added 12 points for Karns City (5-1, 3-1) with eight coming at the line, and Shane Peters had 10. Callihan also had seven points.

UNION CITY, Pa. – Behind a career-high 36 points from Aiden Hartle, North Clarion picked up a 67-46 win over Union City in D9/10 crossover action.

Hartle’s previous career-high was 33 points, set in a Dec. 3 loss of this season to Saegertown in the Sheffield Tip-Off Tournament.

“It was a long bus ride up here, so we had to make sure the guys were ready to go,” Hartle said. “We started off strong and I feel like we did that to the best of our ability.”

The second quarter was all North Clarion (2-4), however.

Leading 17-16, Hartle drilled a three that started a 16-2 run that was only broken by a Bryce Drayer layup for Union City (2-3) with five seconds left in the half.

Hartle scored 11 points in the run, part of a 21-point first half for the senior that saw North Clarion go up 33-20 at halftime.

“I kind of knew my first few shots I was feeling it,” Hartle said. “While I’m feeling it I try to get the other guys involved, work off of them and it ended up being a good night for everybody.”

Union City went on a 6-0 run to start the second half to cut the lead to single digits, but Union City followed with a 7-0 run of its own and the lead never dipped below double digits the rest of the way.

Included in Hartle’s effort was a 12-of-15 performance from the free throw line. Andy Castner scored 10 of his 15 points in the second half for the Wolves, while Drake Irwin added nine points.