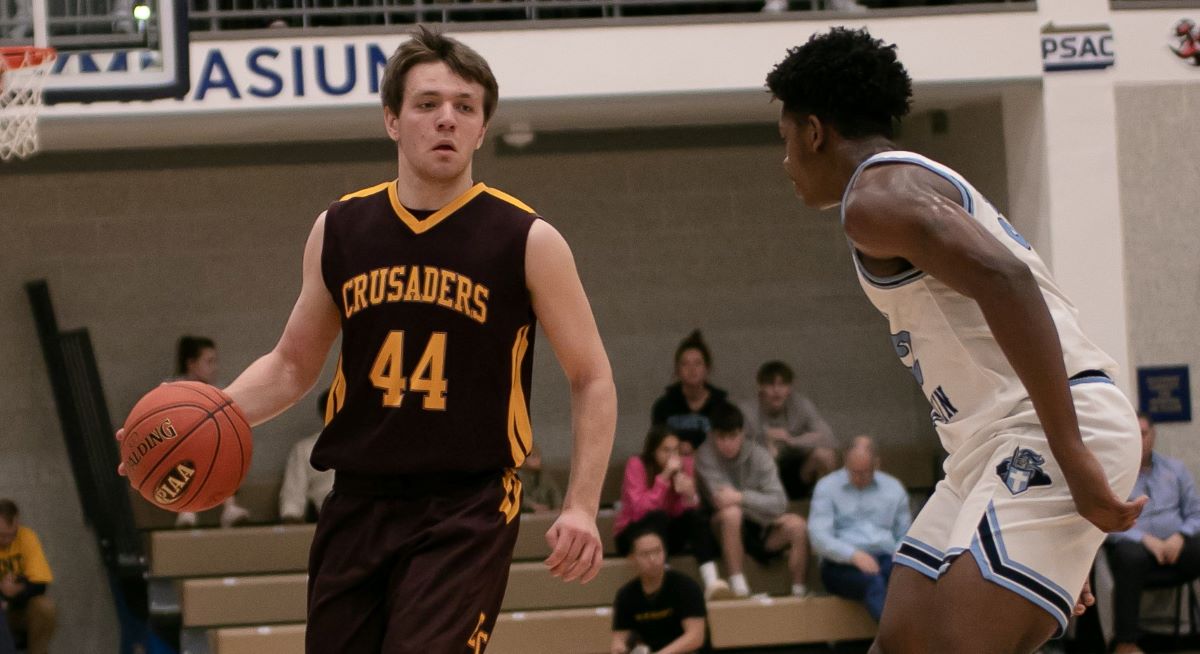 Charlie Breindel had 13 points for ECC. Photo by Jared Bakaysa of JB Graphics. See more of Bakaysa's work herePunxsutawney was the most recent team from either D9 or D10 to win a PIAA softball title winning the 4A title in 2018.

CLARION, Pa. – Elk County Catholic boys’ basketball coach Aaron Straub knew his team was going to have to play a perfect game then some if it wanted to make its second-ever trip to Hershey for the PIAA Class 1A Championship Game.

Unfortunately for D9 champion ECC, it ran into the buzzsaw that is WPIAL champion Bishop Canevin falling to the BC Crusaders 47-21 in the PIAA semifinals Friday night at Clarion University’s Tippin Gym.

“They have a really nice team, some really good players,” Straub, who led ECC to the semifinals for the fifth time in his illustrious 40-year career at the school, said. “I think we probably made them look a little bit better. We were not at our best. Which is taking nothing away from our guys. Our guys did everything and more that we could have asked for this year. Just, unfortunately, we were not at our best tonight.”

ECC shot just 9 of 33 (27.2 percent), turned the ball over 12 times and didn’t manage to get to the free-throw line after hitting 40 of 49 charity shots in its previous two PIAA playoff games.

“We knew that we needed to make some shots,” Straub said. “Their pressure was very good. They certainly got after it.”

Meanwhile, Bishop Canevin came out on fire hitting 6 of its first nine shots while building a 17-5 lead 1:32 into the second quarter.

For the game, the BC Crusaders were nearly 50% from the field, 19 of 40, and that included a 2-for-9 shooting performance in the fourth quarter with the game out of reach.

“When you are a talented team, it is pretty easy to play free and easy when you up,” Straub said. “That is what happened in this game.”

ECC did its best to play at a pace that would give it the best chance to win, and the ECC Crusaders did hold Bishop Canevin to 26.6 points below its season average (the 47 points were the second-fewest this year for BC and the lowest to any team under Class 6A).

“I think (allowing) 23 at the half and 47 (for the game) when you take a look at that you would probably take that coming in,” Straub said. “Although they made us look silly a couple of times with their slips off their high screens for some easy baskets, our problem was on the offensive end not on the defensive end.

Part of ECC’s shooting woes stemmed from the ECC Crusaders’ inability to generate any offense inside the paint where BC swatted away numerous shots that helped lead to the lopsided loss.

“We had a couple of good shots early on, and we had some takes,” Straub said. “The problem is with our takes we knew we needed to show the ball, and we didn’t show the ball. They were able to block some of our shots. That probably set the tone for the rest of the game. The other part of that was we didn’t have anybody relocating on the perimeter. We just had some people standing and watching. But that’s a very athletic team and a team that has assembled a really good group of athletes.”

ECC finished the season with a mark of 25-6, the 16th 25-win season in school history, all under Straub. It also marked the sixth time since 2015 ECC has won 25 or more games.

“This is the fifth time we were able to get to the Western Finals,” Straub said. “We won some really big games along the way. Certainly, when you go out and in your last game you get punched in the nose that creates a little bit of a momentary reason to pause. But we are going to take this game for what it is worth. We were beat by a better team. We are not going to allow this one game to define our season, for sure.”

NOTES: The 21 points were the fewest scored by ECC since Sewickley Academy held the Crusaders to 19 in a 41-19 win in the second round of the PIAA 1A playoffs in 2010 … ECC was last in the PIAA semifinals in 2009 losing 58-44 to Kennedy Catholic. The Crusaders are 1-4 all-time in semifinal games with the lone win coming in 2006, 77-62, over Blairsville in the year ECC went 33-0 and won the PIAA 1A title … Bishop Canevin is in the PIAA Championship game for the first time in school history. It had lost in the 2017 2A semifinals Sewickley Academy, 50-48, in its only other PIAA semifinal appearance … It marked the first time a Bishop Canevin squad beat a District 9 team in the PIAA semifinals this year. The girls’ volleyball team lost to Clarion in the semifinals and the football team lost to Redbank Valley in the semifinals … From the 41-player football roster that lost to Redbank Valley, only one player on the 16-player basketball roster – Geno DeFrank – played both football basketball. According to the PIAA website, Bishop Canevin had 68 boys in grades nine through 12 for this cycle meaning that 60.1% (41 of 68) of the boys enrolled at the school in grades 10 through 12 (PIAA only uses those numbers and does not include the freshman class and two basketball players and 13 football players were listed on the rosters as freshmen) played in either the PIAA football or PIAA basketball semifinal game this year.

March 18, 2022 PIAA Basketball Scores (All Games) Powered by Janney Montgomery Scott in Clarion
Prep, Villa Relay Teams Claim Gold at PIAA Swimming Championships; D9 Has Banner Day
This website or its third-party tools process personal data.In case of sale of your personal information, you may opt out by using the link Do not sell my personal information.
×
Manage consent