Billotte, Kline Lead Clearfield to D9 3A Title; Win No. 299 for Clearfield’s Janocko 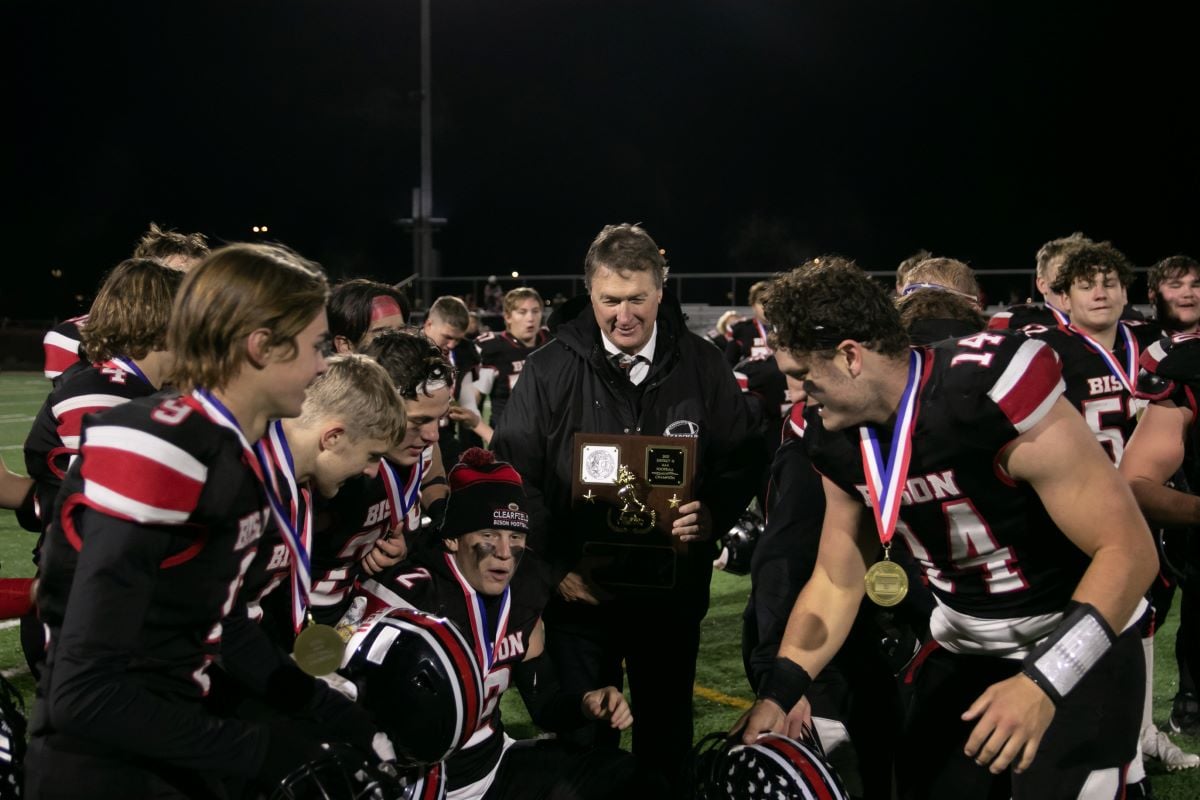 Oliver Billotte was a large part of the Bison offense accounting for six total touchdowns.

His main target was Karson Kline, who hauled in six catches for 123 yards and three scores.

“They’re a great tandem,” Janocko said of Billotte and Kline. “They were double-teaming (Kline) and he was still making great catches.”

St. Marys, which led 7-0 before Clearfield tied the game at seven, took a 13-7 lead on a 17-yard Christian Coudriet to Carter Chadsey touchdown pass with 9;40 left in the second quarter.

From there, however, it was all Clearfield.

District 9’s only unbeaten squad at 11-0 scored the next four touchdowns to end the half with a 35-13 lead.

“We made some adjustments defensively,” Janocko said. “Our kids responded and we settled down offensively.”

Mark McGonigal scored on a 6-yard run to help the Bison regain the lead two minutes after the Chadsay touchdown, 14-13.

The Bison defense stepped up forcing a three-and-out, and Clearfield the Bison extended their lead to 21-13 on the next drive with Billotte finding Kline in the endzone for a 43-yard score.

Another three-and-out by St. Marys gave Clearfield the ball back and Billotte once again found Kline for a 20-yard score and a 28-13 lead with 1:10 left in the half.

An intentional grounding call on the first St. Marys play of the ensuing drive put the Dutch back to their 8-yard line which proved to be disastrous as a fumbled snap by Coudriet was recovered by Hayden Kovalick at the 2-yard line with a minute left in the half.

Billotte punched in one more score with a 2-yard run, and the Bison took a 35-13 lead into halftime.

“It was a big momentum swing,” Kline said of the turnaround in the second quarter. “We were all frustrated with ourselves. We just brought it together and said we’re the better team and we’re going to go out there and prove it.”

The Bison kept their foot on the throttle, and Billotte found Kline for a third time with a 22-yard touchdown pass to help extend the lead to 42-13 coming out of the halftime break.

St. Marys broke the run with a touchdown with 12 seconds left in the third quarter when Tony Lewis caught a 13-yard pass from Coudriet. The 2-point conversion got the Duch back within three scores, 42-21.

But Clearfield didn’t let that score phase it responding with a 12-play, 62-yard drive capped off wit ha 1-yard Billotte touchdown run to make it a 48-21 game with 5:50 left in the game.

Logan Mosier made sure the Dutch wouldn’t go down without a fight as he helped cut the deficit to 49-27 by scoring the longest touchdown of the night with a 69-yard catch and score after he broke a tackle and went untouched.

The score was too late though as the Bison were able to pick up a pair of first downs to run the clock out.

Things started out well for St. Marys, as the Dutch took the opening drive 63 yards down to the Clearfield 3-yard line before Kline intercepted a tipped ball in the end zone.

“We saw the route on the film,” Kline said. “I knew something like that was coming and I read it perfectly and it paid off.”

St. Marys did score on its next possession when Matt Davis capped an 8-play, 79-yard drive with a 5-yard touchdown run.

Clearfield quickly responded by driving 54 yards in eight plays with Billotte rushing for six yards and a score to tie the game 7-7 on the first play in the second quarter.

Despite the loss, Coudriet finished the game 19-for-30 with a game-high 305 yards, three touchdowns and an interception.

Mark McGonigal had a game-high 123 yards on the ground on 18 carries with a touchdown to lead the Bison. Jose Alban had eight carries for 54 yards and Nate Natoli grabbed four catches for 52 yards.

“This means a lot,” Kline said of winning the District 9 title. “Last year there were no fans, but coming into this environment was a lot more fun.”

Clearfield will travel to Bedford in the District 5-9 Class 3A Sub Regional game at a date and time to be announced.

Notes: A win next week would make Janocko the 20th coach in Pennsylvania history with 300 career wins and just the 11th to do it with one program. He would become one of just five active coaches with 300 career victories … It was the 14th District 9 championship for the Bison and their second in a row in Class 3A … Clearfield also has won a pair of subregional titles, including one in 2013 when it also won a D9 title … St. Marys fell to 0-7 in D9 title games having lost the last two years to Clearfield.

Rushing into Semifinals: Smethport has 3 100-yard Rushers in D9 1A Quarterfinal Win over Curwensville
Grove City, Hickory Advance to D10 Class 3A Football Semifinals
We use cookies on our website to give you the most relevant experience by remembering your preferences and repeat visits. By clicking “Accept All”, you consent to the use of ALL the cookies. However, you may visit "Cookie Settings" to provide a controlled consent.
Cookie SettingsAccept All
Manage consent