Big Second Half Sends Meadville to District 10 Class 4A Crown 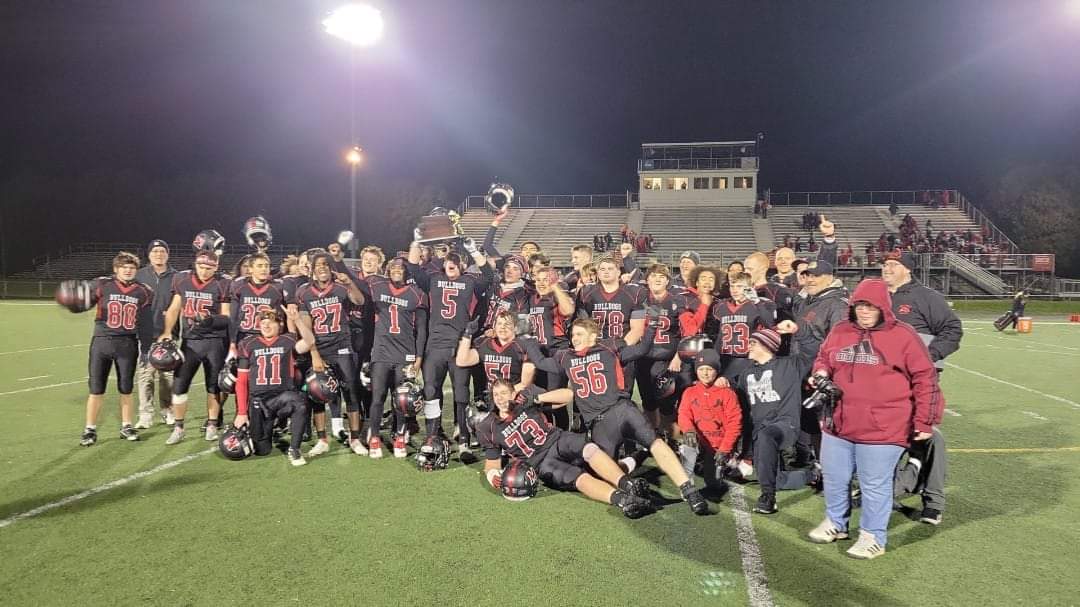 EDINBORO, Pa. – For the second time in program history the Meadville Bulldogs are District 10 football champions.

The Bulldogs overcame a slow start to roll past General McLane, 52-19 for the Class 4A crown, to give them a championship to match the one they won in 2016.

The Bulldogs (8-3) trailed 13-8 after the first quarter, but a safety, followed by a Gavin Longstreth 2-yard scoring plunge gave them a 16-13 lead at halftime.

All they did after that was outscore the Lancers 36-6 in the second half, including 30-0 in the third quarter.

As it has been all season, the rushing game was the story for the Bulldogs as Griffin Buzzell and Khalon Simmons scored three touchdowns each on the.

Simmons scored on a 70-yard run in the first quarter, and his 7-yard plunge early in the third started the surge for Meadville.

He added a 25-yard run a short time later, and Buzzell scored on runs of 23, 1 and 7 yards in the second half.

For the game, Simmons accounted for 214 yards and Buzzell 107.

The Bulldog defense, meanwhile, held John Amon and the Lancers in check for much of the game. Amon did score on a two-yard touchdown run that gave GM the lead in the first quarter, but his 53 yards ended up leading all GM ball carriers.

Nate Danowski, who scored the go-ahead touchdown in last week’s semifinal win over Warren, had the other Lancer (6-4) touchdown in the first quarter.

Amon also added a touchdown toss to Kyle Birkmire in the fourth quarter.

Meadville moves on to face either Juniata or University Prep (that game is Saturday) next week at a site and time to be determined.

Reynolds Blanks Cochranton to Make it Back-to-Back D10 Class 1A Football Titles
Garing, Karns City Pound Their Way into D9 2A Title Game; Ridgway in Title Game for 5th time in 6 Years
We use cookies on our website to give you the most relevant experience by remembering your preferences and repeat visits. By clicking “Accept All”, you consent to the use of ALL the cookies. However, you may visit "Cookie Settings" to provide a controlled consent.
Cookie SettingsAccept All
Manage consent