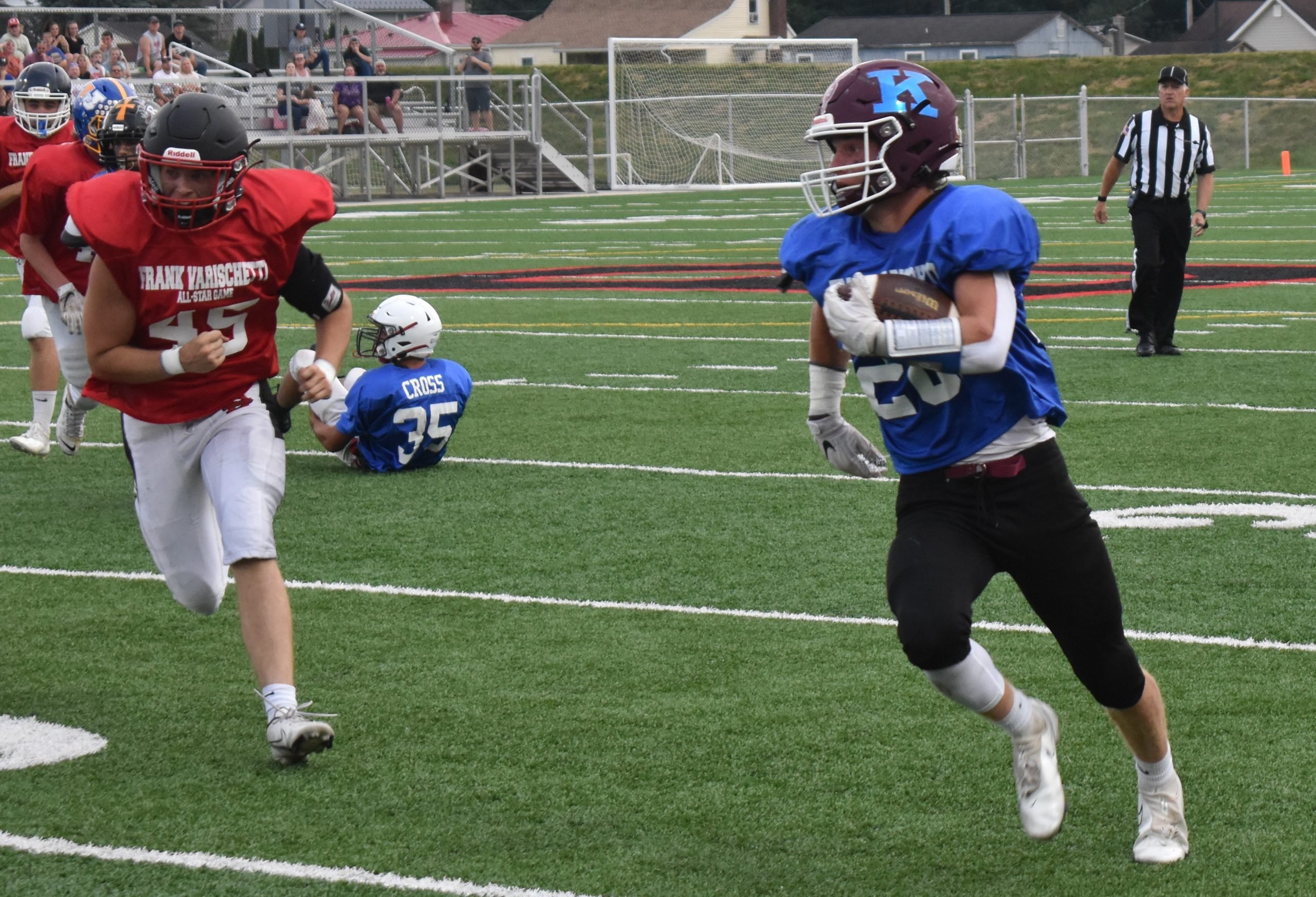 Dom Allegretto of the North squad on his 41-yard punt return score. Photo by Andy Close.

BROCKWAY, Pa. – In a game full of big plays, Ridgway’s Dom Allegretto and Hunter Wall were a big difference as the South defeated the North, 21-13 in the seventh annual Frank Varischetti All-Star football game.

The game was stopped with 2:25 to go in the fourth quarter due to lightning, with the North driving deep in South territory.

The South struck first less than two minutes into the game, with the Redbank Valley duo of Bryson Bain and Marquese Gardlock hooking up for a 37-yard score on 4th down.

After that, it was a whole lot of Allegretto, Cam Marciniak, Noah Lent, and the North ground game, although it took a while for them to get on the board.

“We said earlier in the week that both teams have good players,” said North coach Chris Dworek of St. Marys “We took a couple of shots, but we came back with some body blows and got some momentum going, so that was key. It was only 7-0 after the first quarter and we clearly had the momentum.”

Noah Lent (Smethport) of the North squad lowers his shoulder for extra yardage.

Twice they had drives stall in the red zone, but it was the special teams and the special play of Allegretto that tied the game, as he returned a punt 41 yards to the house to tie the game at 7-7.

“Watching all the older kids you look up to your whole life playing in this game, it’s so cool,” Allegretto said. “It was fun to get out there and play with a bunch of guys I used to hate.”

The North defense began to take over the game and got the ball back to the offense after Allegretto’s punt return.

They quickly went to work, as Cam Marciniak broke off a 60-yard run, setting up Allegretto’s second touchdown of the game from two yards out to make it 14-7

And with Dworek’s St. Marys quarterback, Christian Coudriet, and Noah Lent of Smethport, the North was able to implement almost two different offenses.

“It was almost two different playbooks,” Dworek said. “He (Lent) is a heck of an athlete. It was fun coaching him. I would read about him every Saturday.”

Allegretto capped off another sustained North drive with 5:10 to go in the third quarter, a 4-yard run that was his third touchdown of the game, and gave the North a 21-7 lead.

Bain and Gardlock were hot early, but the South went to the ground game and Karns City’s Luke Garing to get back in the game. His touchdown with 5:27 to play gave the South life at 21-13 (the extra point was missed).

Luke Cramer (Karns City) had over 100 yards rushing and scored a touchdown for the South squad.

The South never got the chance to get the ball back, however.

An attempted onside kick was recovered by the North squad, which picked up a pair of first downs before the game was called with 2:25 left.

Marciniak led the North with 113 yards rushing on 11 carries, while Lent had 10 carries for 61 yards and Allegretto 33 yards on the ground.

Most of all, all the players made lasting memories.

“So whenever I go fishing up North, I’m going to look for those kids from Smethport, from Port Allegany,” Dworek said. “I was in Bucktail for the first time a few weeks ago so I’ll be looking for those kids. That’s what’s cool. Meeting kids, getting to know them. You remember this forever.”.

Listen Live: Frank Varischetti All-Star Football Game on B-94
St. Marys’ Dworek Named to 2023 PA Coaching Staff for Big 33 Game
This website or its third-party tools process personal data.In case of sale of your personal information, you may opt out by using the link Do not sell my personal information.
×
Manage consent