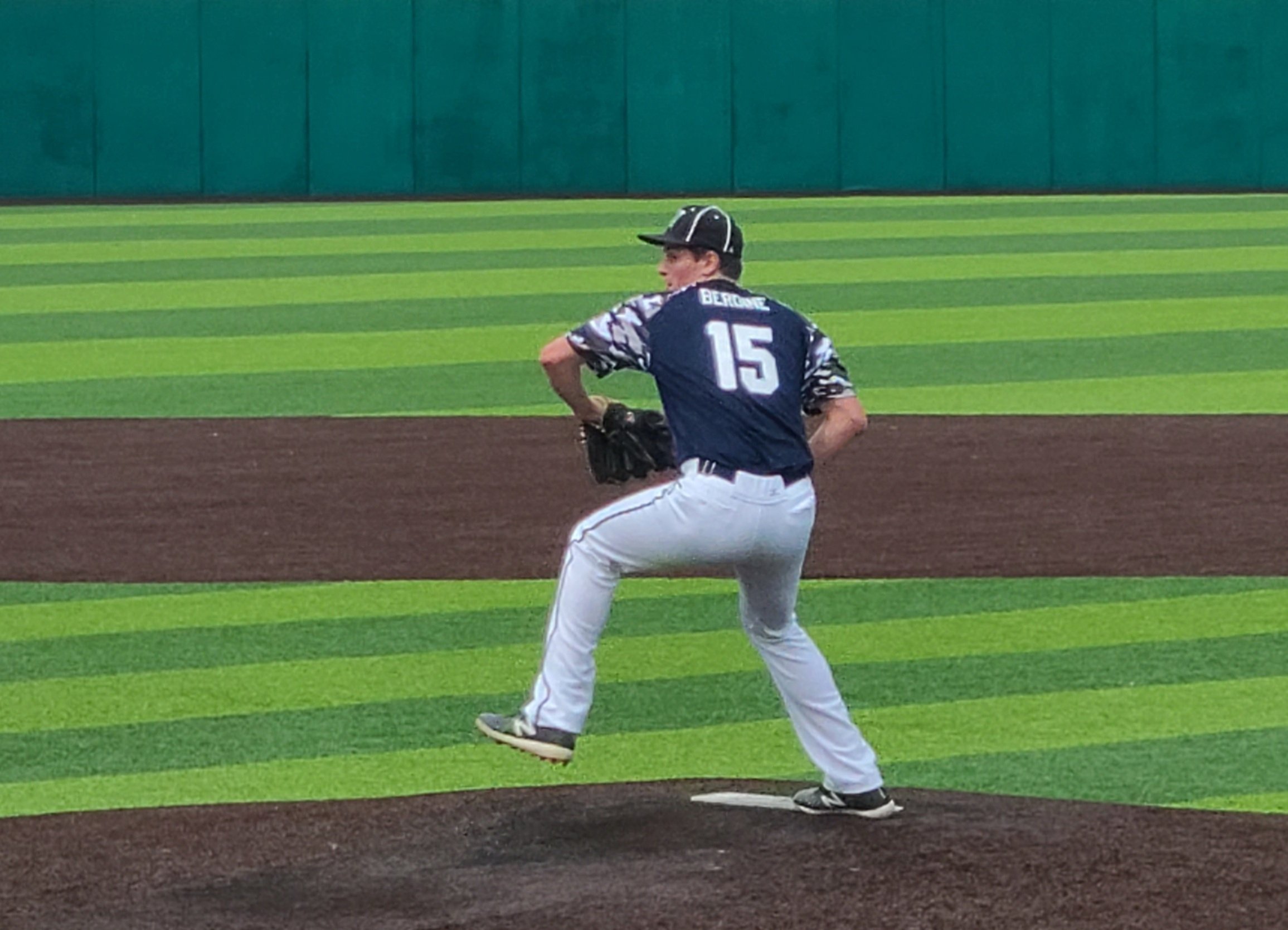 SLIPPERY ROCK, Pa. – Locked in a pitcher’s duel with his future college teammate, Warren’s Ben Berdine took matters into his own hands against Grove City in Tuesday’s District 10 Class 4A quarterfinal.

Berdine doubled with one out in the fourth inning, the Dragons’ first hit of the game, and Ben Sowa followed with a big 2-out infield single that got what seemingly was a critical first run on the board. It turned out to be the first of seven for the Dragons, who got to Grove City ace Mason Jones in what turned out to be a 7-1 victory over the Eagles.

Berdine, like he has been all season, was a rock for the Dragons. He went six innings, allowing just one run on five hits and one walk, striking out seven.

“Ben was amazing today,” said teammate James Swanson. “We knew it was going to be a pitcher’s duel between Jones and Ben and Ben came out on top. That was huge.”

Berdine gave the credit to his defense. The senior got seven ground ball outs and a couple of infield popouts. The infield combination of Alex Borger, Micah Passmore, JT Blum, Anthony Errett, and Berdine’s battery mate, Gio Elinsky, were up to the challenge.

“The past couple of years we’ve had a good defensive team,” Berdine said. “As long as I have guys that are going to make plays behind me, I don’t have to worry. I’m just going to do my thing, throw strikes and they’ll pick me up.”

In the 3-run Warren (11-8) fifth, Borger drew a leadoff walk, Dylan Maeder had a bunt single and Swanson was hit by a pitch to load the bases. Passmore stepped up and was also plunked to bring in a run, which was followed by a 2-RBI groundout from Berdine. Swanson, who was on second on the play, never slowed down as he rounded third, using his speed to create the fourth Dragon run.

Jones, who will join Berdine at Mercyhurst University next season, got an RBI single off him in the fifth, which proved to be the lone run of the day for the Eagles (11-8). Jones was dominant at times, especially early in the game, and finished with 10 strikeouts. He allowed three hits and three walks and hit a pair of batters.

He was lifted after six innings because of pitch count, and the Dragons were able to plate three more runs, with the big blow coming via Swanson’s 2-run double. Berdine brought Swanson in with an RBI single, putting the finishing touches on his big day.

Berdine was also lifted after six because of pitch count, and Sowa came in to retire the final three batters. He worked out of several jams throughout the game, including first and second, no outs in the fourth, by getting a pop out, a strikeout and a fly out. He limited the Rockets to 1-for-9 with runners in scoring position.

Berdine finished with three RBIs and Swanson and Maeder scored two runs each.

Next up for the Dragons is a date with Harbor Creek in the semifinals on Friday. The winner of that game will get an automatic bid to the state tournament, as D10 4A is taking two teams.