Behind DiMichele’s 39, OLSH Rallies Past Kennedy Catholic in OT in PIAA 2A Semifinals 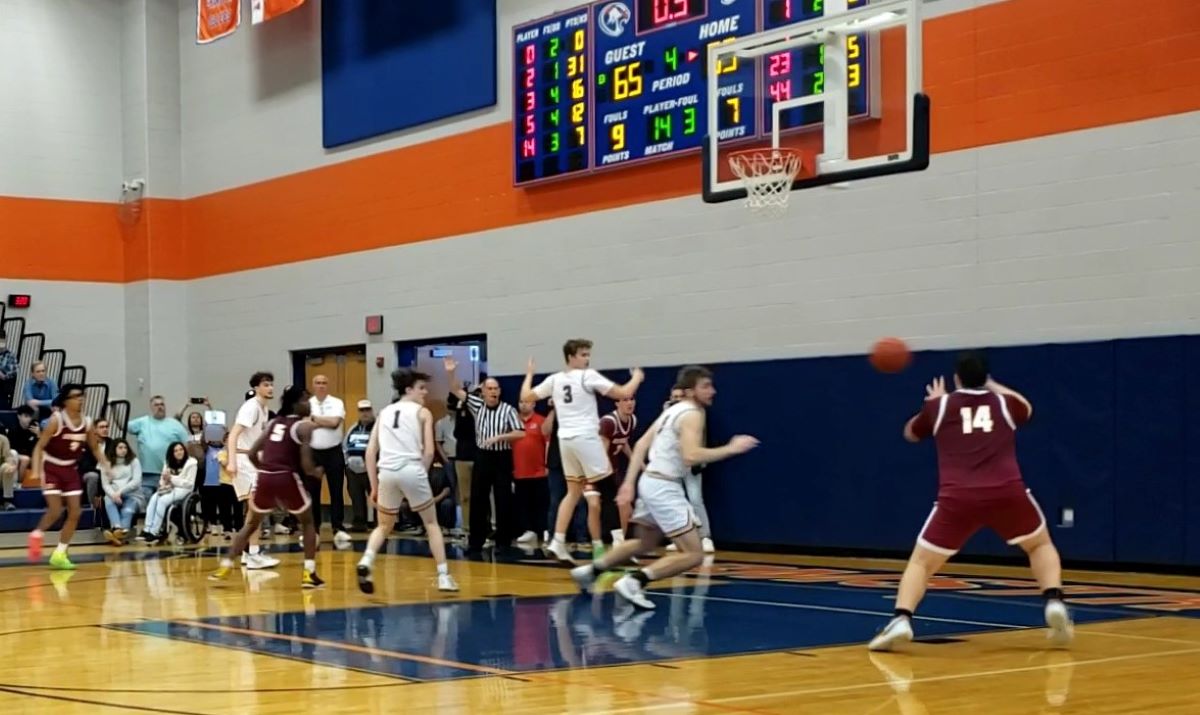 Remington Hart gets set to receive the pass from Geo Magestro at the end of regulation. Hart's shot was blocked by Dawson Summers (Seen turning in the lane)

Kennedy Catholic has historically played the role of favorite. But Saturday afternoon at Armstrong High School in Kittanning, the Golden Eagles were the big underdogs yet almost came away with a win that would have been heard around the Commonwealth.

Unfortunately for Kennedy Catholic, Our Lady of Sacred Heart’s Jake DiMichele showed why he is the fourth all-time leading scorer in WPIAL history scoring 21 of his game-high 39 points in the fourth quarter and overtime to rally the unbeaten and defending PIAA Class 2A champion Chargers to a 78-68 overtime win over the D10 champion Golden Eagles. It is the 67th consecutive win for OLSH.

“It’s (the outcome) is something that is obviously going to hurt,” Kennedy Catholic head coach Ken Madison said. “Some of the sophomores, freshmen, juniors sitting on that bench will understand when we get in this position the next time how to do it. But my seniors, Elijah (Harden), Gio (Magestro), Malik (Lampkins-Rudolph, not in any order, they are phenomenal. I am just happy they were able to show it on this stage.”

Those seniors, especially Harden who exploded for 31 points while hitting nine 3-pointers, gave Kennedy Catholic the opportunity to pull the upset of upsets, but a once 22-point first-half lead that was still 10, 63-53, with 5:15 to play slipped out of the grasp of the Golden Eagles late.

“I think in that moment, for anybody, it’s difficult,” Madison, whose team tried its best to run clock against the more athletic Chargers, said. “We are in March Madness, right? We are watching tournament games right now where it is happening to 21 and 22 years olds. I feel like we got a couple of shots. We just didn’t make them towards the end. You wish our execution could have been a little bit better.”

Sure, things could have been a little cleaner for the Golden Eagles but the credit really goes to DiMichele, who scored the final nine points of a 10-0 run that pulled the game even for the first time since 0-0 at 63-all on a DiMichele 3-pointer with 1:46 to play in regulation.

Magestro, who scored 18 points, gave Kennedy Catholic the lead back with a basket with 1:30 to play, but Dawson Summers retied the game at 65 on a bucket with 1:13 to play. Summers, though, missed a free throw on the play that would have given OLSH its first lead of the game.

That allowed Kennedy Catholic a chance to win the game late.

And the Golden Eagles got two solid looks from inside 10 feet in the closing seconds only to have both shots blocked away.

First, Magestro drove the lane and dished to Simeri Wade on the left block. But Summers got a hand on the ball, which went out of bounds and was awarded back to Kennedy Catholic with 0.3 of a second on the clock (if this had been college basketball with replay about a second was on the clock when the ball went out of bounds, but alas there is no replay in high school basketball).

Magestro, again, made a great pass on the inbounds to an open Remington Hart about six feet from the hoop on the right side. But again Summer, who had momentarily lost Hart on the inbounds, came over and had an emphatic rejection of Hart’s floater as time ran out.

The game remained tied nearly halfway through overtime before DiMichele hit a dagger 3-pointer at the 2:10 mark to put OLSH up for the first time in the game, and for good, 68-65.

The Chargers then hit 10 of 12 free throws, including their final eight, over the last 1:21 to put the game away.

“Regardless of the outcome, it was a remarkable season,” Madison said. “It doesn’t end the way that we wanted it to, but I don’t know how many people besides us in the locker room expected us to be at that point headed to overtime or actually at the end of regulation a chance to win to go to states. It was a remarkable season by everybody.”

It was also a remarkable game by Harden.

The senior came out and had himself a first quarter for the ages hitting six 3-pointers and scoring 18 of Kennedy Catholic’s 27 first-quarter points to help the Golden Eagles to a 27-10 (they actually led 27-7) lead at the end of the quarter.

While Harden cooled down a bit in the second quarter – seriously who wouldn’t – his triple with 3:57 to play in the first half gave the Golden Eagles their biggest lead of the game 36-14.

But OLSH started to right the ship after that.

A 3-pointer by Rocco Spadafora, who was actually fairly quiet with just nine points, sparked a half-ending 15-4 run by the Chargers to get them within a reasonable 11 points, 40-29, at halftime.

Kennedy kept the pressure on through the first two-plus minutes of the second half and still led by 13, 47-34, following another Harden 3-pointer with 5:40 to play in the third quarter.

But again OLSH had the answer this time in the form of a 14-5 quarter-ending run that pulled the Chargers within four, 52-48, by the end of the quarter with Kevin Wilson knocking down a 3-pointer with 37.1 seconds left to make it a four-point game.

After Harden and Brad Vaughn traded 3-pointers early in the fourth quarter, the Golden Eagles made either final push with a basket by Hart and two free throws by Harden to extend the lead back to 10 one last time, 63-53.

OLSH, which very well could be looking for three PIAA 2A titles in a row if the 2020 season hadn’t ended early because of COVID-19, goes for its second straight PIAA title at 2:30 p.m. Friday, March 25, against District 12 champion Consitution at the Giant Center in Hershey, Pa. Constitution knocked off District 2 runner-up Old Forge, 67-40, in the other semifinal contest Saturday.

Villa Drops Thriller to Lansdale Catholic in PIAA Class 4A Semifinals
Chocolate Town Make Room for the Golden Eagles; DiNardo, Fields Lead Kennedy Catholic Girls to PIAA Title Game
This website or its third-party tools process personal data.In case of sale of your personal information, you may opt out by using the link Do not sell my personal information.
×
Manage consent