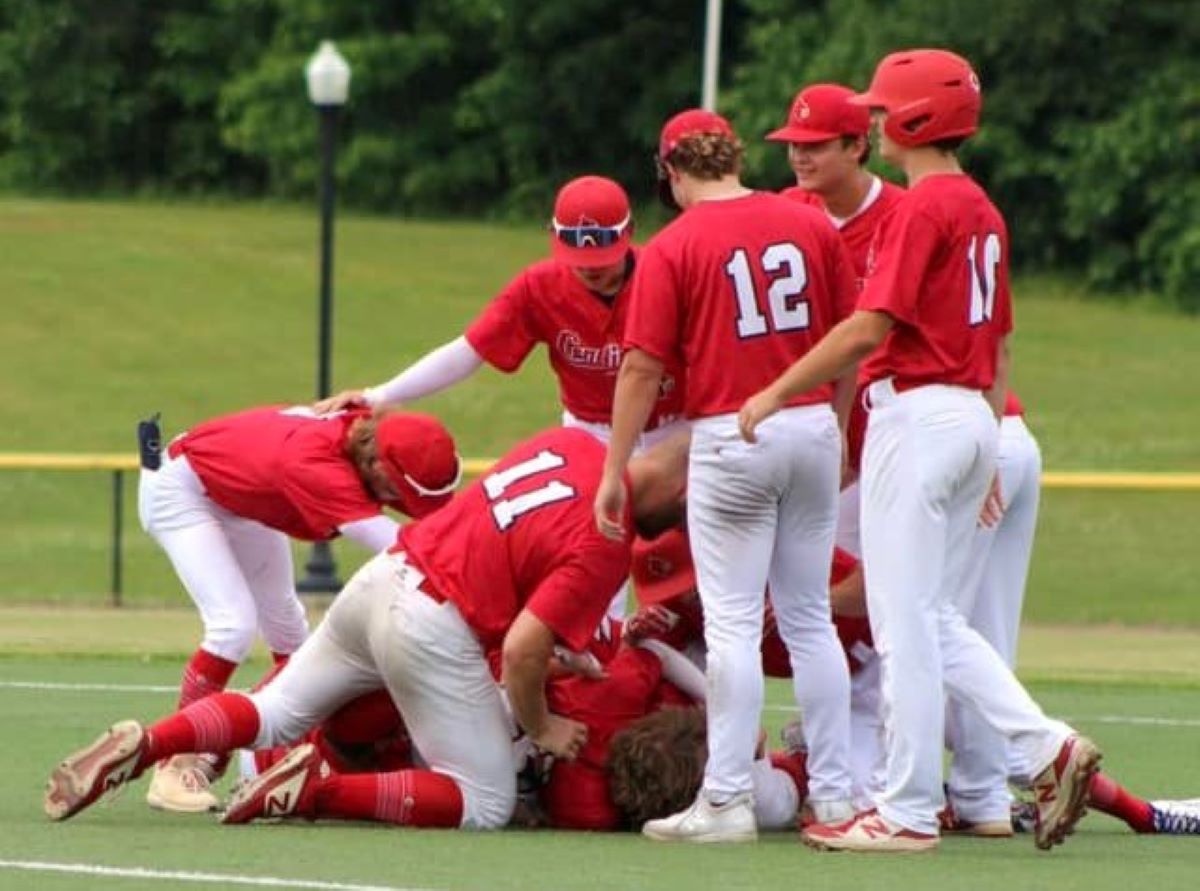 DCC punched its ticket to the PIAA Class 1A title game, its first trip since winning it all in 2001, with a 12-2, six-inning victory over District 5 champion Southern Fulton Monday afternoon at Mt. Aloysius College.

“It’s great,” senior Brandin Anderson said. “It has been a really big goal of ours all year. We have worked really hard to get to this moment.”

“All year we have been talking about it,” Sansom said. “Now it is time.”

DCC manager Adam Fox said reaching the championship game has been the goal since day one.

“It’s incredible,” Fox said. “This group, they are just a special group. They play as a unit. They understand what unity is. Our slogan is ‘it’s about us’. It’s not an arrogant thing. It’s literally each and every one of them. We don’t look at each other as individuals. Everybody has a job. Everybody has a role. We go about our business. At the end of the day, it’s about winning. These kids have figured out how to win. They’ve competed at a level that is a winning level. They are just a special group. I am so happy for them, for the community. But the job is not done. We know that, and we aren’t satisfied. We are going to State College on Friday on a mission,”

“I know the guys ground out at-bats,” Fox said. “Even our outs are productive. You have guys getting 3-2 counts, guys fouling balls off, just situational hitting. Stuff like that that doesn’t show up in the box score. That’s super important for what our approach is at the plate.”

With DCC adding runs throughout the middle of the game – the Cards scored one in the second, two in the third, four in the fourth, and one in the fifth to go ahead 8-1 at the time – Southern Fulton found itself playing from behind for the second straight game after falling behind 4-0 to Clarion-Limestone in the quarterfinals before rallying for an 8-5 win.

There was no rally this time, as Carter Hickman and Sansom made sure of that.

Hickman got the win going the first 4 ⅓ innings allowing one unearned run on four hits and three walks while striking out one to go to 10-0 on the season.

The outing was gutsy for the junior, who worked around trouble most of the afternoon.

“It’s just will and competitiveness,” Fox said. “The kid is just a maniac, a maniac on the mound. You are just blessed to have a Carter Hickman who goes out and competes no matter what stuff he has. His last three outings, he hasn’t had his best stuff, but he put us in a position to win. We took what he had and the team rallies around him and usually scores some runs.”

As much as Hickman battled, Fox had seen enough when the junior loaded the bases with just one out in the fifth inning on two singles and a walk.

Following the walk to Ethan Powell, Fox went to his senior left-handed closer, Sansom with the two-best hitters for the Indians coming up.

And Sansom delivered striking out No. 4 hitter Dane Harvey and No. 5 hitter Trayton Younger to get out of the jam.

“That was electric, wasn’t it,” Fox said. “For Cole to come in and lights out against their four and five hitters. He was just taking care of business.”

Sansom said the goal was to just not let Southern Fulton score.

As good as Sansom was in the fifth, he struggled with control in the sixth hitting a pair of batters and walking one to load the bases with no outs.

But going to his curveball, Sansom limited the damage allowing just one run leaving DCC ahead 8-2 going to the bottom of the sixth.

“If I lose the feel of the fastball, I usually go to my curveball,” Sansom said. “It was working, like it usually does. I just trusted that. My team helped me out. They saved me that inning.”

And the Cardinals put the game away in the sixth thanks to four walks, a hit batsman, an error, and the game-ending single by Pisarchik.

Fox said that was big because it meant that he didn’t have to use ace Brandin Anderson in the seventh meaning he will be going on seven-days rest in the title game Friday.

DCC went ahead 1-0 in the second when Sansom walked with one out, went to third when Ben Gritzer reached on an error, and scored on the two-out single by Pisarchik.

DCC made 3-0 in the third when courtesy runner Dylan Hanna scored on a wild pitch and Brayden Fox scored on a sac fly by Kaden Brezinski.

After Souther Fulton got a run back in the fourth on an error, DCC put up the four-spot in the bottom of the inning.

Matt Pyne and Snowberger had back-to-back RBI singles with one out to make it 5-1, and a Fox fielder’s choice made it 6-1 before Brezinski delivered an RBI single.

A Pisarchik sac fly in the fifth pushed the lead to 8-1.

“We all just stuck to our approaches and treated it like another baseball game,” Anderson said. “We knew our bats had to be productive, (that we) had to do good on defense and execute the pitches on the mound.”

DCC will face Halifax, a 6-5, eight-inning winner over Tri-Valley, in the title game at 11 a.m. Friday, June 17, at Medlar Field at Lubrano Park on the campus of Penn State University.

“We just have to do little things during the week, keep our focus, and work really hard like we have been,” Anderson said.

Watch the full postgame interview of Anderson and Sansom

“Unfinished Business”: DCC Heads Back to Class 1A State Title Game After 4-0 Win Over Saegertown Powered by North Washington Rodeo
Singleton’s Walk-Off Sends Clearfield Past Beaver, Into 4A State Championship Game Powered by North Washington Rodeo
This website or its third-party tools process personal data.In case of sale of your personal information, you may opt out by using the link Do not sell my personal information.
×
Manage consent