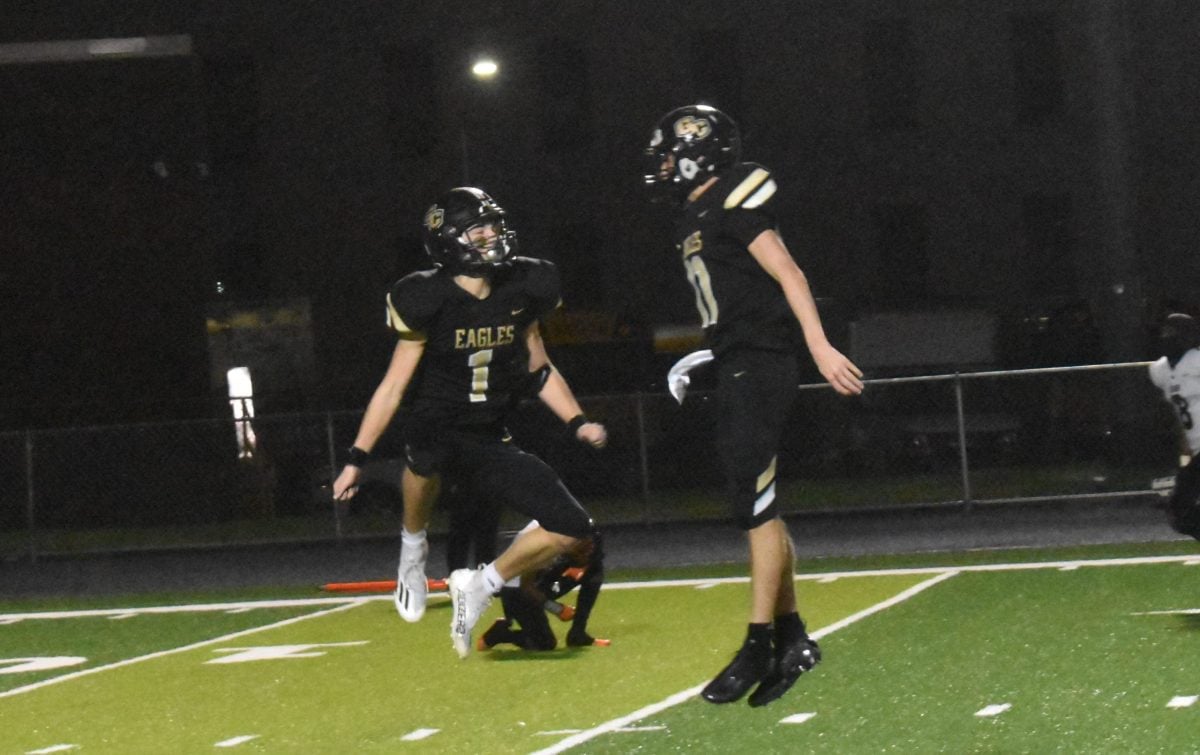 Grove City's Gavin Lutz (1) and Nathan Greer (11) celebrate after the Eagles' 22-21 comeback win over Sharon in the D10 3A semifinals. Photo by Andy Close.

FARRELL, Pa. – Alex Hackwelder said he felt like it was a script right out of Hollywood.

And who could blame him?

All the sophomore quarterback did was come in with Grove City trailing 21-14 to Sharon in the fourth quarter of the D10 3A semis and direct a game-winning touchdown drive after starter Hunter Hohman took a hard shot along the sideline and had to leave the game.

With the 22-21 win, the Eagles advance to their seventh straight D10 title game, where they will look to win back-to-back crowns against a familiar opponent – Slippery Rock.

“I can’t lie, I was extremely nervous,” Hackwelder said. “But I knew I had my team around me. It honestly felt like a movie.”

Hohman was banged up after a run to the Sharon 47-yard line and Hackwelder came in and didn’t miss a beat, completing a 36-yard pass to Nathan Greer down inside the 10.

On a goal-to-go situation from the 1, Hackwelder picked up a low snap and plunged into the end zone to get the Eagles, who had trailed 21-7, back within one with 4:05 to play.

Alexander Hackwelder comes on in relief on an injured Hunter Hohman and directs TD drive. 21-20, 4:04 to go. Eagles going for 2 pic.twitter.com/FemOaibl8d

Coach Sam Mowrey decided to go for two and Hackwelder again showed poise beyond his years, connecting with Gavin Lutz for what proved to be the game-winning score

“I don’t even know where to start,” said Grove City coach Sam Mowrey. “First of all, Hunter’s okay, you can see him over there he’s doing good. I know he wanted to be out there, but it says a lot about Alex for him to be able to step off the bench there and execute in the most tense and tight of moments.”

And the Grove City defense, which was tested all night by a strong Sharon run game, stood tall when it mattered the most. They forced a turnover on downs with under a minute to play to put the game away.

“You know that last drive, with Hunter out, Anthony Nemec moves to outside linebacker and Bode Stevenson jumps in at middle linebacker and makes a big play there,” Mowrey said. “Again, just a testament to the kids and stepping up and being ready when their number is called to make some plays for the team.”

Hohman also had a pair of interceptions on defense, one of which came in the second half.

“The kids just made some unbelievable plays,” Mowrey said.

For Sharon, it was a game in which they controlled for the better part of three quarters. Coach Jason McElhaney was equally proud of his group.

“Our guys fought their butts off tonight,” McElhaney said. “They deserved to win this football game but came up just a little short.”

Sharon didn’t complete a pass in the game, but their rushing attack was nearly unstoppable in the first half.

Quarterback Mikey Rodriques got it done with his legs, scoring on touchdown runs of 16 and 43 yards in the first half.

Rodriques fumble is recovered in the end zone for a TD. Sharon 7, Grove City 7, :30 1Q pic.twitter.com/qnGaAamkva

His second touchdown run came just over a minute later at the 11:03 mark of the second quarter after Sharon got a stop, Rodriques broke around the right end and raced 43 yards for a touchdown that made it 14-7.

“Mikey is possibly the toughest football player I’ve ever been around,” McElhaney said. “He is just physically tough and you know plays Mike linebacker and plays quarterback and runs the ball and he’s a lead blocker. We are so blessed to have that kid as our quarterback and such a great example for our program going forward.”

Twice Sharon came up with big stops in the half, first when Cortez Nixon intercepted Hohman at the 6-yard line and the second when Hohman’s Hail Mary attempt to Trey Reznor came up four yards short as time expired in the first half.

Cortez Nixon with a big INT for Sharon pic.twitter.com/UvZiAokVLu

Despite the wet conditions, Grove City was forced to look to the air over the final 17-plus minutes.

“We had to push the envelope a little bit and you know, try and make some plays down the field, Mowrey noted. “And the conditions obviously weren’t ideal for that. But again, it speaks to the character of the kids and just executing plays that were called, and the effort was extraordinary.”

Hohman finished with 183 yards through the air with one touchdown and two interceptions, while Hackwelder was 3-of-4 for 45 yards. Nemec had 33 yards on the ground, while Greer had 117 yards receiving and Lutz 87.

“We’re looking forward to it,” Mowrey said. “We have a lot of respect for their program and coach (Larry) Wendereusz. Our focus is going to be on enjoying Monday through Friday and making the most of our time together.”

NEW WILMINGTON, Pa. – Using a stifling defense, Slippery Rock advanced to the District 10 Class 3A title game for the second straight year with a 28-0 win over Hickory in the semifinals at Wilmington.

The defensive touchdown came on a 10-yard fumble return by Brett Galcik to open the scoring with 3:26 to play in the first quarter.

Slippery Rock then tacked on a second-quarter touchdown on a 9-yard William Mokel to Sam Schwartz scoring pass.

The 14-0 lead held until the fourth quarter when the Rockets (7-4) put the game away with a pair of touchdowns.

Sal Mineo made it 21-0 on an 8-yard run early in the quarter before Maddox Allen dashed in from 27 yards out with 8:01 to play.

Allen, Mineo, and Mokel helped lead a Rockets’ rushing attack that picked up 173 yards on 35 carries.

Allen led Slippery Rock with 15 carries for 77 yards with Mineo adding 56 on seven totes, and Mokel 41 on nine carries.

Mokel was also 8 of 12 for 80 yards and the score. Mineo caught three passes for 37 yards.

Sean Kennedy ran 10 times for 24 yards for seventh-seeded Hickory (5-6) with Logan Woods going 5 of 11 passing for 27 yards with an interception.

Slippery Rock will rematch with Grove City, a 22-21 come-from-behind winner over Sharon, in the title game next week at a site, day, and time to be announced.

Last year, Grove City topped rival Slippery Rock, 28-20 for the D10 title. The teams met in the regular season this year Sept. 23 with the Eagles winning, 22-21.

The Rockets are looking for their first D10 title since winning back-to-back titles in 2002 and 2003.

ERIE, Pa. – There was no drama this time around for the McDowell Trojans against Allderdice.

After trailing the Dragons at the half before rallying for a 27-13 win in last year’s subregional, the Trojans make quick work of the Dragons this time around, leading 42-0 at halftime en route to a 42-15.

Artis Simmons was once again a catalyst for the offense, rushing for three first-half touchdowns on runs of 13, 4, and 10 yards.

Bobby Blue and Stephon Porter also had touchdown runs in the first half of 18 and 13 yards, respectively.

The defense got in on the scoring act as well, with Trey Goodwine taking an interception 35 yards to the house.

The Trojans outgained the Dragons 356-175, with Simmons leading a balanced ground game with 70 yards. Ben Moore finished with 58 yards on the ground, Blue 51, Porter 48, and Blayze Myers 40.

Matt Herbe and Nick Vogan also had interceptions for the McDowell defense.

With the win, the Trojans advance to play District 6 champion State College, a 28-7 winner over Altoona, next Friday or Saturday.

Pizza Hut District 9 and District 10 Football Live Scoreboard – Week 12 2022 (Nov. 11-12)
Clearfield Holds Off Late St. Marys Drive to Claim D9 3A Football Title
This website or its third-party tools process personal data.In case of sale of your personal information, you may opt out by using the link Do not sell my personal information.
×
Manage consent