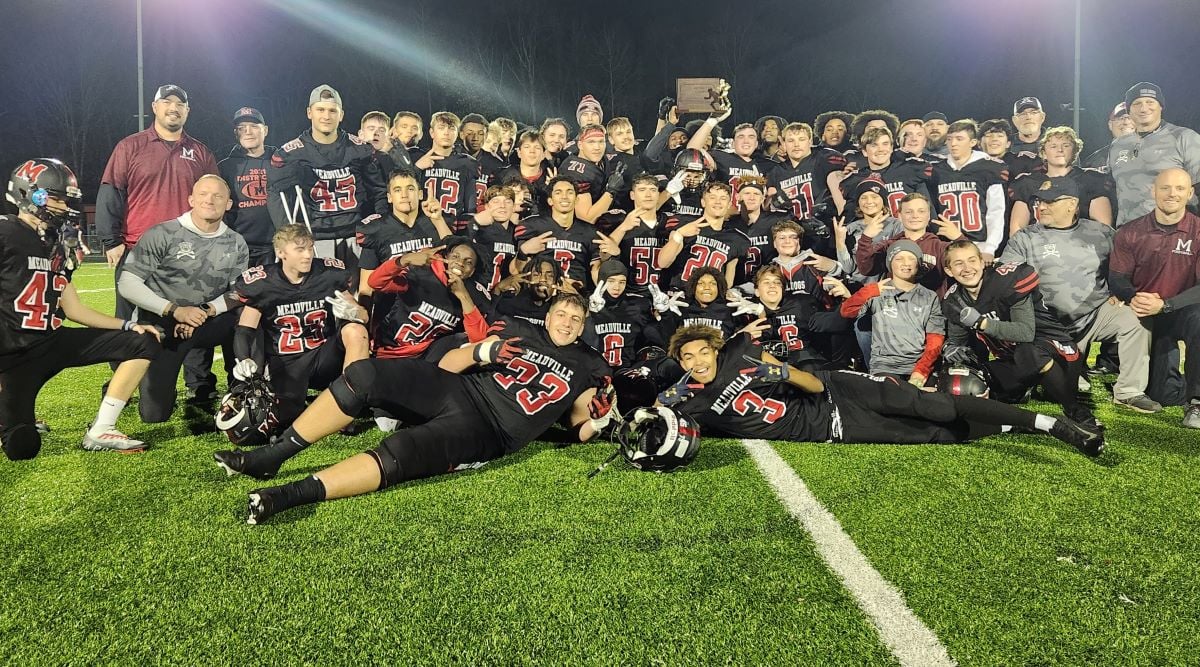 The 2022 D10 Class 4A football champions, the Meadville Bulldogs. Photo by Andy Close.

Meadville scored the final 48 points of the game, as Khalon Simmons accounted for six total touchdowns in the Bulldogs’ 62-14 win over the Beavers in the District 10 Class 4A title game – securing their second straight championship in the process.

“It feels way better than I thought it would,” Simmons said. “Last year I didn’t really think of it as anything. Now that I’m a senior and I realize this could be one of my last games, it definitely means more.”

Simmons had 200 yards rushing and four touchdowns threw for a score and returned a punt for a touchdown, while Brady Walker had 127 yards on the ground and a pair of scores.

It was actually Amarri Lewis that got the Bulldogs on the board with a 2-yard touchdown run after he carried the ball for 46 yards inside the 5.

It was a back-and-forth affair until the midway point of the second quarter, however, as Simmons scored on runs of 51 and 10 yards and Corry quarterback Nolan Carey scampered in for an 8-yard touchdown run.

It was 21-7 when Carey connected with Ryan Brutcher for a 60-yard touchdown pass, and all of a sudden it was 21-14 and looking like a far cry from the 55-6 game the two teams played to start the season.

“It wasn’t easy,” said Meadville coach Ray Collins. “I knew Corry was going come to play. This is playoff football. They came out swinging tonight and played a great first half of football. We really had to lock it in and get focused.”

Corry’s momentum was short-lived, as Meadville scored three touchdowns before the half to take a 42-14 lead.

After the long touchdown pass, Simmons capped a 65-yard drive with a 23-yard touchdown run.

The next two Meadville scores came after turnovers.

Brighton Anderson intercepted Carey on the ensuing Corry possession and Simmons connected with Andre Jefferson one play later on a 25-yard touchdown pass with 1:24 to go in the half.

Walker made the big defensive play moments later with a strip sack of Carey, giving the Bulldogs the ball at the Corry 33.

“We were in a defense and then coach switched it on us and I was like, oh this is my blitz,” Walker said. “I came free and tackled him and he kind of let the ball drop so I just grabbed it.”

Both of Walker’s touchdown runs came in the second half on runs of 4 and 3 yards, the first of which put the running clock into effect with a 35-point lead.

Simmons put the finishing touches on his brilliant game with a 65-yard punt return for a touchdown with 1:31 to go in the third quarter.

“The second half was much better,” Collins said. “Hats off to Corry, though. Those are tough kids. They came in with an awesome game plan and they executed it very well in the first half. I told the kids before the game this isn’t the same team you saw in Week 1.”

Lewis finished with 63 yards on the ground for Meadville, while Simmons was 3-of-4 passing for 72 yards.

“What a great legacy, especially for these seniors, to win back-to-back District 10 championships,” Collins said. “It’s (our Wing-T) is really working well right now. That’s our philosophy with the Wing-T – we want to pound the ball downhill and play physical football and then we’ll spread you out and get our speed out in space. It’s working really well for us right now.

Carey finished 10-of-22 through the air for 126 yards and also had 36 rushing yards. Nathan Lesher led Corry with 53 yards on 14 carries, while Ethyn Allen had 48 yards on 11 carries for the Beavers.

Up next for Meadville, which reached the PIAA quarterfinals a year ago, is a date at University Prep in Pittsburgh on Saturday.

“Honestly we don’t know anything about them,” Collins said. “I’ve seen a little bit of film on them and what I see is a lot of athletes and a team that throws the ball a lot. Luckily we have an extra day to prepare and we’ll take advantage of all the practice time we have.”

McDowell Powers Past Butler for District 10 Class 6A Crown
Epic Game-Winning Drive Lifts St. Marys to D9 3A Title Game; Brookville Goes from 0-4 to Playing in D9 2A Title Contest
This website or its third-party tools process personal data.In case of sale of your personal information, you may opt out by using the link Do not sell my personal information.
×
Manage consent