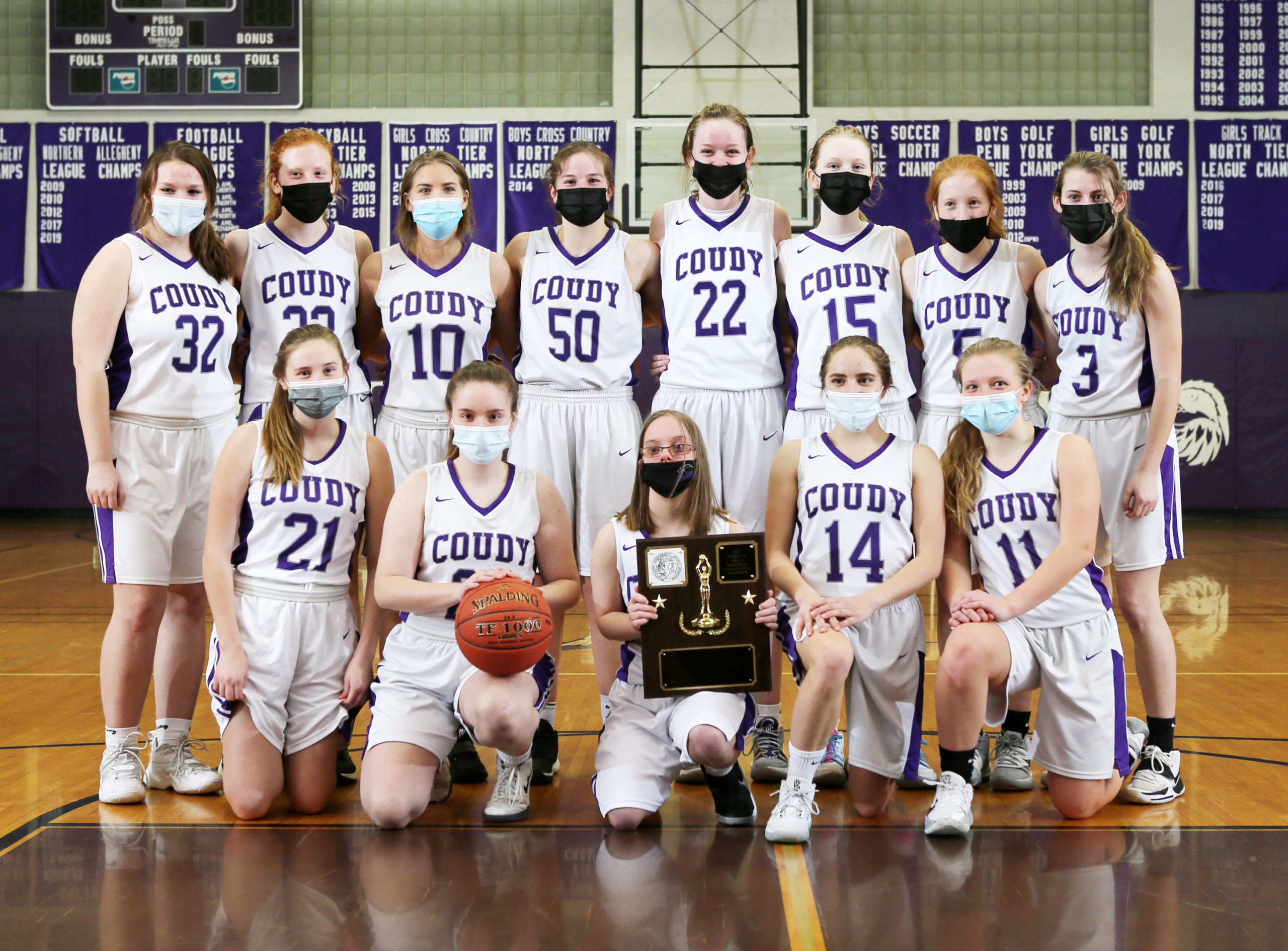 COUDERSPORT, Pa. – It’s time to hang another number on the banner.

The Coudersport Lady Falcons clinched back-to-back District 9 Class 1A titles on Tuesday, rallying for a 41-28 win over a gritty Otto-Eldred team.

Trailing by four, 20-16 at halftime, the Lady Falcons offense heated up in the second half and they limited the Lady Terrors to eight points over the final 16 minutes.

“Usually we come out flat after the half,” noted Coudy senior Roz Page. “We got a really good pump-up speech from our coach (at halftime) and we were ready to go. We were all so excited. We knew all we had to do was get back in the game, keep our heads up, and just score some points.”

They did just that, securing the program’s 10th District 10 title this century.

And they did it offensively with a whole lot of Page and Emma Chambers.

Both picked the perfect time to have their best offensive outputs of the season. Chambers connected for a season-high 15 points and Page tied her season-best with 16.

“It’s always a thrill,” said Coudersport coach Bob Tingley about the championship. “I’ve been on both ends of it. It’s a lot easier to not concern yourself with the score and only what’s going on in the game when you’ve been there before. If you’re behind and you haven’t been there, you concern yourself with the score more. We’ve been in some dogfights. They’ve (Otto-Eldred) played us tough. And most of the kids have been there (in big games) too.”

Page scored eight points in the quarter, with her jumper with 1:35 to go (off a steal she created), gave the Lady Falcons (20-1) their first lead since 16-15 in the second quarter.

That was followed by a 3 from Chambers to extend the lead to five, an advantage they never relinquished.

“She shot the ball well,” Tingley said of Chambers. “I had a little talk with her. I don’t like to mess with a kid’s shot during the season, but there was just one little quirk in her shot. I saw her shooting it like that in warm-ups, I corrected that and she ended up shooting well. And we need that out of her. She’s very capable.”

Those were the first points of the game for Chambers, who came in averaging over 17 per contest.

Chambers did plenty of other things both defensively and rebounding to help her team to the win, but Otto-Eldred coach Shawn Gray was pleased with the defense his team displayed.

“We did a good job on her both times we played them this year (in the regular season),” Gray said. It was the Lady Terrors that handed Coudy its only loss back in January. “To hold her down like that, we might have expected a little better result at the end. But 50 (Page) is pretty good, and the little Chambers sister is pretty good. And (Liz) Frame, even on one wheel is good, They’re the standard.”

Frame, as Gray alluded to, missed the Lady Falcons’ semifinal win over Port Allegany after injuring her ankle in the quarterfinal victory over North Clarion.

She didn’t start but quickly came into the game and played an integral role.

Katie Sheeler came out strong for O-E, scoring all of her points in the first half as O-E built its lead.

The Lady Falcons had three consecutive 3’s – one by Frame to end the first quarter, followed by Page and Emma Chambers, the latter of which came with six minutes to go before halftime.

That was the last time Coudy scored in the half, as O-E put the clamps on defensively.

Second-quarter buckets from Morgan Dalton, Reilly Raught and Sheeler helped the Lady Terrors close the half on a 9-0 run.

“I didn’t want to do something that we did,” Tingley said, referring to his team’s game plan after halftime. “I wanted to hang on to it, but if you don’t win this one, you don’t go to the next one, so we did it and it worked out fine.”

“I can’t say enough good things about them,” Gray said of his team. “They are the standard by which kids in our area are now going to be judged. They’re such wonderful human beings. Everybody coming through our program has to live up to that standard.”

Sarah Chambers had five rebounds, three assists and three blocks for Coudersport, while Belle Porterfield added a pair of steals.

“The seniors add an awful lot,” Tingley said. “They’ve been great leaders this year. They want to be here and they aren’t going to back down. For a coach, that’s very satisfying.”

With the win, Coudy advances to play District 6 champion Bishop Guilfoyle in the PIAA quarterfinals on Saturday. It’s the same round they advanced to a year ago before the COVID-19 shutdown hit.

“We know Guilfoyle, we’ve met them in the past,” noted Tingley. “They’re always tough. They’re rich in tradition and they aren’t coming in to lose. I think it’s wonderful we’re playing here. It’s really unique. I just wish we could have the fans that could normally be here. But a lot of people watch.”