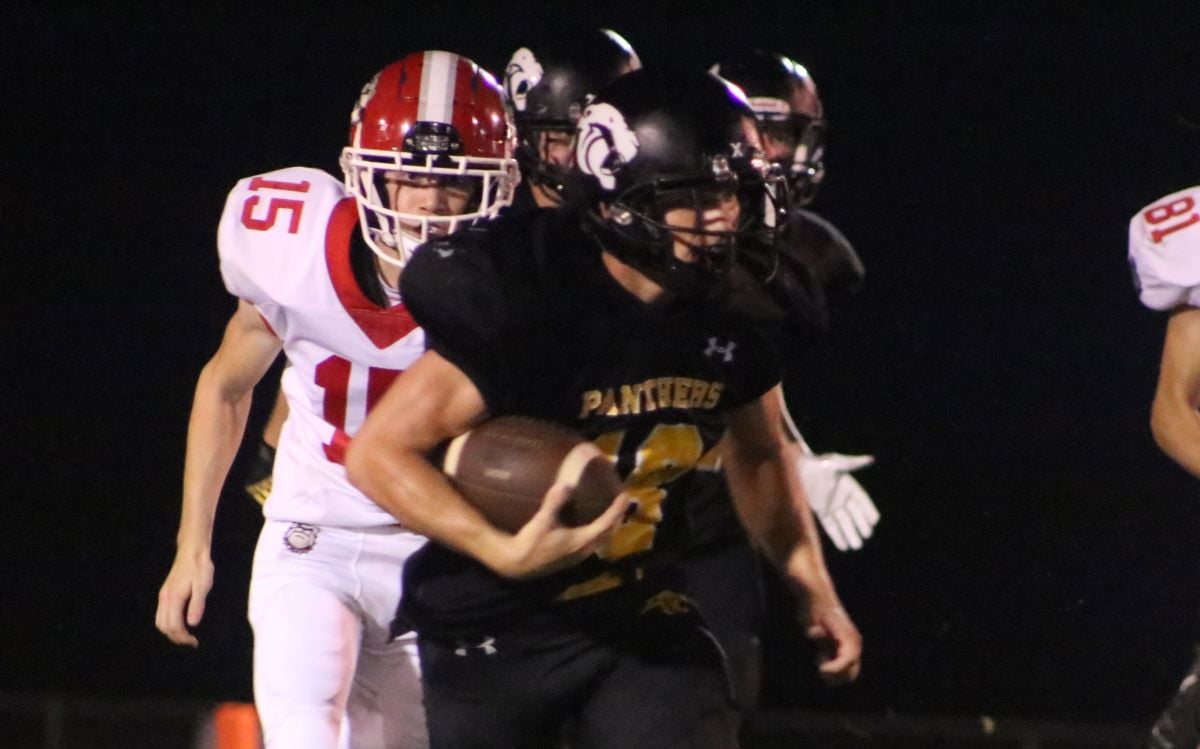 Zander McHenry of Keystone breaks into the clear on his game-deciding 80-yard kickoff return for a touchdown in the fourth quarter Friday night. Photo by Shelly Atzeni. Check out more of Atzeni's work here

KNOX, Pa. — Zander McHenry’s 80-yard kick return for a touchdown with 6:55 left in the game and just after Redbank Valley had taken a 20-16 lead lifted Keystone to a 22-20 win over the defending District 9 Class 1A champion Friday night.

The Panthers beat the Bulldogs, ranked No. 5 in the preseason state poll put out by pennlive.com, despite not scoring an offensive touchdown and being outgained by the Bulldogs, 153-83.

Keystone’s first two touchdowns came in the second quarter on interception returns, first by Kyle Nellis covering 25 yards and Steven Shetler going for 35 yards to give the Panthers a 14-8 halftime lead.

The Panthers made it 16-8 when the Bulldogs were called for a safety due to a holding penalty in the end zone at the 6:54 mark of the third quarter.

But Redbank Valley scored two touchdowns to regain the lead after opening the game with an 8-0 advantage. Gunner Mangiantini completed a 63-yard TD pass to Mason Clouse with 43 seconds left in the third quarter and then Bryson Bain hit Chris Marshall with a 26-yard scoring strike to make it 20-16 after a failed two-point conversion pass.

Both teams combined for just 13 first downs. Nellis ran for 39 yards on 13 carries to lead the Panthers, who only got 13 passing yards from Bret Wingard, who was 2-for-7 with an interception.

The Panthers limited the Bulldogs to minus-27 yards rushing thanks largely to three bad snaps totaling minus-43 yards. Mangiantini led the team with 18 yards on six carries while completing 4 of 8 passes for 117 yards and one TD. Bryson Bain completed 6 of 11 passes for 63 yards with two interceptions to go with two TD passes. Chris Marshall caught four passes for 42 yards.

The Bulldogs’ first TD came in the first quarter on Bain’s 18-yard pass to Tate Minich.

ST. MARYS, Pa. – Domenic Allegretto and Camron Marciniak combined to score four touchdowns to lead visiting Ridgway to a 24-7 win at St. Marys in a battle of the teams picked to finish one-two in the D9 League Large School Division.

Allegretto scored on runs of 48, 10, and 4 yards for the Elkers, who were picked to finish second, while Marciniak scored on a 2-yard run that came at the end of 16-play, 90-yard drive that took 8:41 in the first half and gave Ridgway a 6-0 lead.

Marciniak helped set up Allegretto’s 10-yard scoring run when he returned the opening kickoff of the second half 80 yards, as Ridgway went up 18-0 early in the half.

Allegretto added an interception on defense for the Elkers.

Everett took a 6-0 lead with 18 seconds left in the first half on a 1-yard Malex Akers touchdown run, but the Warriors missed the extra point.

Butler ran 11 times for 85 yards and the score and caught two passes for 45 yards, while Dan McGarry was 10 of 18 passing for 117 yards and ran eight times for 19 yards. Mullins caught three passes for 47 yards, and Ty Terry had four catches for 25 yards (all stats are unofficial).

Akers ran 13 times for 83 yards and the touchdown for Everett while going 7 of 13 passing for 77 yards. Jacob Price ran nine times for 45 yards, Tyler Bumgardner 11 times for 42 yards, and Calin Iseminger 15 times for 30 yards.

Ben Reynolds had a pair of touchdown runs and Ben Paul threw for another for the Crusaders, who gave first-year head coach Nick Werner his first win.

Paul opened the scoring with a 78-yard touchdown pass to Joe Tettis in the first quarter.

Reynolds scored the first of his two TDs from four yards out with just over a minute to go in the second quarter. He found the end zone again midway through the third quarter with a 9-yard run for the Crusaders’ final point.

The Bucks recovered a fumble in the end zone for their lone score of the game early in the fourth quarter.

Reynolds ran for 98 yards on 17 carries with the two scores. Paul was 7-13 passing for 123 yards a TD and two interceptions. Tettis finished with 93 yards and a touchdown on three receptions.

KANE, Pa. – Landon Darr, Jake Costanzo, and Ricky Zampogna each scored a touchdown to lift Kane to a 21-6 win over visiting Moniteau in Todd Silfies return to the Wolves sideline.

Zampogna, Morris, Addison Plants, and Kane Scharba all had interceptions for the Wolves.

Cooper Bozel had 10 catches for 130 yards and a touchdown for Moniteau, while David Deccisino was 18 of 34 passing for 178 yards, a touchdown, and three interceptions. He also ran 11 times for a team-high 20 yards.

HYDE, Pa. – Oliver Billotte ran for a pair of touchdowns and threw for a third to lead Clearfield to a 27-7 win over visiting DuBois.

Billotte ran nine times for 66 yards and was 9 of 20 passing for 201 yards, the score, and an interception.

Karson Kline caught eight of those passes for 161 yards and a touchdown, while Mark McGonigal ran 14 times for 37 yards and a score.

BROOKVILLE, Pa. — Scoring 22 unanswered points in the second half, Brookville pulled away for a 36-6 win over Bradford Friday night.

The Raiders led 14-6 at halftime before scored on three straight possessions to start the second half, two coming off Bradford turnovers. After the Owls outgained them in the first half, the Raiders limited them to just 37 yards and three first downs the rest of the way.

Sophomore Charlie Krug, the younger brother of graduated and now IUP quarterback Jack Krug, made his varsity starting debut by completing 18 of 23 passes for 209 yards and a touchdown while running for another.

Owls quarterback Elijah Fitton completed 10 of 22 passes for 151 yards with three interceptions. He ran for 40 yards and scored the Owls’ lone TD on a 1-yard run in the second quarter.

SLIPPERY ROCK, Pa. — Locking up a play date at the last minute due to their regular games getting canceled due to COVID-19 issues with foes, Slippery Rock hosted Central Clarion County in a non-conference game and it was the Rockets that handed the Wildcats in a 38-7 rout.

The Rockets forced the PIAA’s Mercy Rule running clock by scoring the first 38 points. Shane Thompson made it 38-0 on his 66-yard run early in the fourth quarter. Central Clarion’s lone touchdown came later when Ryan Hummell scored on a 3-yard run with 5:57 remaining.

Rockets quarterback William Mokel completed 8 of 16 passes for 140 yards and two TDs. Thompson ran for 92 yards on just seven carries. Thompson scored twice, catching a 1-yard pass from Mokel in the second quarter and finished with 38 yards on two catches. Mokel’s other TD pass started the game’s scoring on a 24-yarder to John Sabo 43 seconds in the second quarter.

Nick Kingerski’s 43-yard field goal gave the Rockets a 17-0 halftime lead. Mokel ran for a 6-yard TD to start the second half and Brett Galcik went nine yards for a score less than three minutes later. He finished with 56 yards on six carries.

Luke Garing carried the ball just six times but made them count, scoring three touchdowns and finishing with 27 yards on the ground.

Nate Garing had 70 yards on the ground, including a 43-yard touchdown run and was also on the receiving end of a 12-yard touchdown pass from Eric Booher, who finished with 75 yards through the air.

Girard scored all 17 of its points in the fourth quarter. Gunner Bax finished with 128 yards and a touchdown on the ground for the Yellow Jackets, while Zach Lowe had 45 yards rushing and a touchdown.

Fox, Kosko Thrive in Varischetti Offense, as Brockway Stuns Union/A-C Valley
D9and10Sports.com to Broadcast (Audio only) Smethport at Sheffield Football Saturday
This website or its third-party tools process personal data.In case of sale of your personal information, you may opt out by using the link Do not sell my personal information.
×
Manage consent