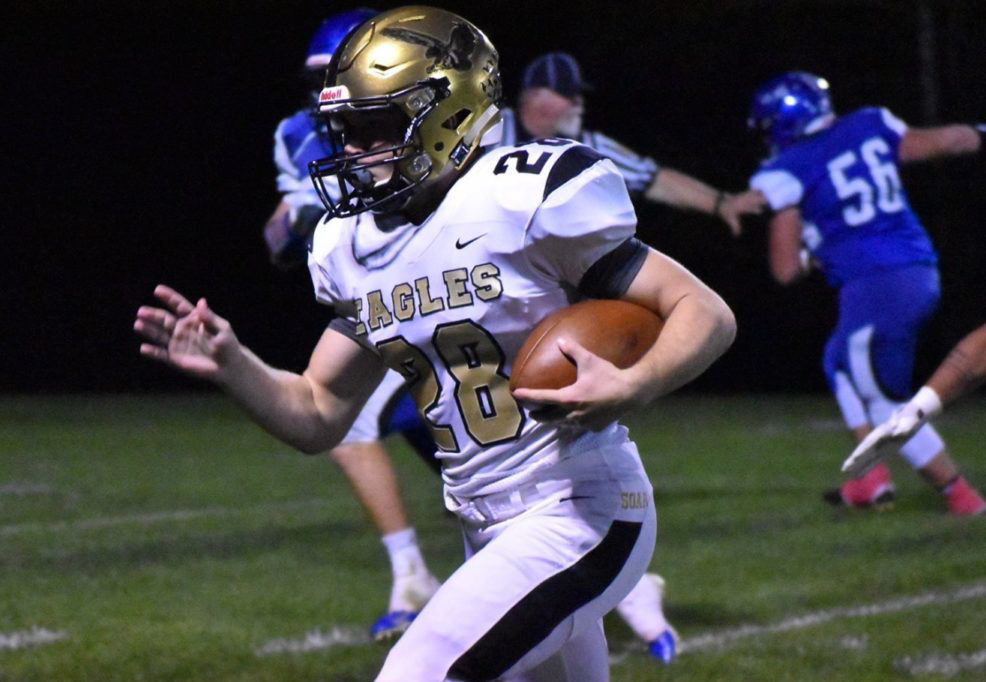 GROVE CITY, Pa. – Grove City first overcame a 21-7 deficit, then held on late to come away with a thrilling 50-48 win over Meadville in the game of the night in District 10.

Curtis Hovis was a workhorse for the Eagles on the ground, carrying for 226 yards on 23 carries and four touchdowns Meadville had three 100-plus yard rushers in the losing effort, as Griffin Buzzell had 191 yards (3 touchdowns), Khalon Simmons 165 (2 touchdowns) and Brady Walker 100 (1 touchdown).

The Eagles were down 21-7 midway through the second quarter, then trailed 28-14 with just under three minutes left in the half before tying it at 28-28 with two minutes to play. Meadville took the lead just before the half as Simmons hauled in a 16-yard scoring strike from Gavin Longstreth to make it 34-28.

The two teams traded scores in the third quarter, with Anthony Pereira hauling in a 15-yard touchdown from Hunter Homan to give Grove City a 35-34 lead. Meadville answered with a Buzzell 30-yard touchdown run, but the 2-point conversion was unsuccessful.

Grove City scored back-to-back touchdowns on a Hovis 19-yard run and a Hohman 11-yard connection to Joey Hathaway. That made it 50-40 GC with 8:23 to go in the game.

Buzzell scored on a 5-yard run with 2:59 remaining to get the Bulldogs back to within 50-48 after the successful 2-point conversion, but the Eagles were able to hold them off.

Hohman finished with 232 yards and three touchdowns, while Hathaway had 110 yards receiving.

The Sailors trailed 7-0 after one-quarter of play thanks to a Garrett Knapp 1-yard touchdown run, but that was short-lived.

Gavin Murdock led the offensive charge for the Sailors, throwing for two scores and adding another on the ground in the quarter. For the game, he was 8-of-14 passing for 173 yards and run for 130 yards on 10 carries. Mitchell Tingley had a monster game as well, returning a pair of fumbles for touchdowns and also catching a TD pass from Murdock.

It was Aiden Osborne that got the scoring going for the Sailors with a 10-yard touchdown run, followed by a 65-yard scoring run from Murdock, who connected a short time later with Calogano Wilkins on a 77-yard scoring strike. Tingley caught a 20-yard scoring pass from Murdock and Tingley closed the half with a 40-yard fumble return.

Tingley added the lone touchdown of the second half as well, a 67-yard fumble return.

ERIE, Pa. – Michael Parks and Wakeem Page combined for five touchdowns as Cathedral Prep rolled to a 49-6 win over Erie.

Parks scored on runs of 1, 2, and 1 yards and had 74 total rushing yards, while Page had touchdown receptions of 14 and 5 yards.

Suhtaun Lewis led the Ramblers with nine carries for 123 yards and a score. Carter Barnes was 8-14 passing for 107 yards and three TDs.

NEW WILMINGTON, Pa. – In a matchup of last year’s Class 2A and Class 1A District 10 champions, it was all Wilmington as they blanked Reynolds, 50.

Luke Edwards had a big game on the ground for the Greyhounds with 150 yards and three touchdowns.

Leading 14-0 at halftime, Wilmington outscored Reynolds 28-0 in the third quarter to put the mercy rule into effect.

Tuff McConahy threw for a touchdown and ran for another, while Cole McCallister was on the receiving end of that score and also returned an interception for a touchdown.

RUSSELL, Pa. – Eisenhower’s defense picked up right where it left off in 2020 as the Knights blanked Saegertown, 14-0.

Eisenhower held Saegertown to just 147 yards of offense and racked up five sacks. The offense was efficient in generating 351 yards, with 290 of those yards on the ground.

Junior Keegan Eckstrom led the way with 11 carries for 127 yards and a touchdown and earned the Jim Kelly Player of the Game Powered by the Allegheny Grille of Foxburg. Benji Bauer ran for 66 yards on 14 carries and Shawn Pascuzzi had eight carries for 45 yards and a TD.

In his first start at quarterback, Garrett Jenson went 6-9 for 61 yards. Bauer had four receptions for 42 yards.

Both teams had issues holding on to the ball, with Saegertown losing one fumble and Eisenhower three. Two of the Knights’ fumbles came deep in Panthers’ territory.

GREENVILLE, Pa. – Kylon Wilson scored on an 80-yard kickoff return and Farrell, the No. 2 ranked Class 2A team in the state, never looked back en route to a 58-0 victory.

Omar Stewart Jr. also hauled in a touchdown pass from Trian Holden for the Steelers in the first half. They led 36-0 at the break, putting the mercy rule into effect for the second half.

Lamont Samules Jr. scored a pair of second-half touchdowns for the Steelers. Stallworth finished with 117 yards on the ground.

WARREN, Pa. – Eric Dippold stepped in at quarterback for Warren and scored three total touchdowns to help lead the Dragons to a 33-0 win over Conneaut.

Dippold opened the scoring with a 2-yard plunge, then connected with Ben White for a pair of TD passes (33 and 42 yards). He also threw a 2-point conversion to Justice Greene.

Warren led 20 at halftime and limited the Eagles to 100 yards of total offense.

Tommy Nyquist added a rushing touchdown and finished with 100 yards on the ground on 23 carries. Ethan Senz added 68 yards and a score on the ground as well for the Dragons.

SLIPPERY ROCK, Pa. — Locking up a play date at the last minute due to their regular games getting canceled due to COVID-19 issues with foes, Slippery Rock hosted Central Clarion County in a non-conference game and it was the Rockets that handed the Wildcats in a 38-7 rout.

The Rockets forced the PIAA’s Mercy Rule running clock by scoring the first 38 points. Shane Thompson made it 38-0 on his 66-yard run early in the fourth quarter. Central Clarion’s lone touchdown came later when Ryan Hummell scored on a 3-yard run with 5:57 remaining.

Rockets quarterback William Mokel completed 8 of 16 passes for 140 yards and two TDs. Thompson ran for 92 yards on just seven carries. Thompson scored twice, catching a 1-yard pass from Mokel in the second quarter and finished with 38 yards on two catches. Mokel’s other TD pass started the game’s scoring on a 24-yarder to John Sabo 43 seconds in the second quarter.

Nick Kingerski’s 43-yard field goal gave the Rockets a 17-0 halftime lead. Mokel ran for a 6-yard TD to start the second half and Brett Galcik went nine yards for a score less than three minutes later. He finished with 56 yards on six carries.

SHARPSVILLE, Pa. – Caullin Summers’ 23-yard touchdown pass to Blaze Knight with 1:08 to play in the fourth quarter, coupled with the extra-point from Liam Campbell gave Sharpsville a dramatic 7-6.

The game was the first for the Blue Devils in a co-op with West Middlesex.

Loudonville had taken the lead earlier in the quarter on a Matt Spang touchdown run.

HERMITAGE, Pa. – It was tough-going for the defending D10 Class 3A champion Hickory Hornets, as they fell 50-7 to a powerful Ursuline squad.

The Hornets scored their lone touchdown of the game on a 6-yard touchdown pass from Logan Woods to Ramarion Whitehead in the second quarter. Whitehead had 69 yards receiving in the game.

Luke Garing carried the ball just six times but made them count, scoring three touchdowns and finishing with 27 yards on the ground.

Nate Garing had 70 yards on the ground, including a 43-yard touchdown run and was also on the receiving end of a 12-yard touchdown pass from Eric Booher, who finished with 75 yards through the air.

Girard scored all 17 of its points in the fourth quarter. Gunner Bax finished with 128 yards and a touchdown on the ground for the Yellow Jackets, while Zach Lowe had 45 yards rushing and a touchdown.

The Tigers scored 21 points in the second quarter to take control of the game, after opening the first quarter with a safety.

Garrett Hodak led Cambridge Springs with 33 yards on the ground.

EDINBORO, Pa. – General McLane scored a pair of unanswered touchdowns in the third quarter to pull away from three-time defending D10 Class 4A champion Oil City, 33-12.

John Amon scored on a 14-yard run and Magnus Lloyd a 57-yard pass from Dylan Sheeder in the third quarter for the Lancers.

Amon finished the game with 140 yards on the ground and a pair of scores, while Sheeder had 172 yards through the air, three touchdowns and two interceptions. Lloyd had a pair of touchdowns receptions and Amon the other.

Ethan Knox rushed for 166 yards and a score for the Oilers.

ERIE, Pa. – McDowell’s Christian Santiago scored on a 3-yard touchdown run, his third score of the game, to put McDowell up 35-26 in the fourth quarter en route to a 35-33 victory over Lake Catholic.

The Trojans trailed 14-13 at halftime, but took a 28-14 lead thanks to touchdown runs of 25 yards by Santiago and four by Artis Simmons.

Alex Sontheimer also booted a 31-yard field goal for the Trojans in the first half. Santiago finished with 130 yards on the ground.

North East scored its lone touchdown of the game in the fourth quarter on a Jackson Humes 47-yard strike to Zane Knight-Strong, who finished the game with seven receptions for 88 yards. Humes had 113 yards through the air.

HARBORCREEK, Pa. – Maplewood scored 21 points in the second quarter on its way to a 35-7 win over Iroquois.

Ben Gilberto was a workhorse for the Tigers, carrying the ball for 163 yards and three touchdowns.

Dominick Kinney also scored on a pair of rushing touchdowns for the Tigers.

Blake Foulk also added a touchdown on the ground for the Cardinals, who scored all 22 of their points in the first half.

Clay Thomas eclipsed 100 yards on the ground for Union City.

Cameron County Rallies from 13 Down in Final Five Minutes to Beat Coudy, Break 20-Game Losing Streak
Fox, Kosko Thrive in Varischetti Offense, as Brockway Stuns Union/A-C Valley
This website or its third-party tools process personal data.In case of sale of your personal information, you may opt out by using the link Do not sell my personal information.
×
Manage consent