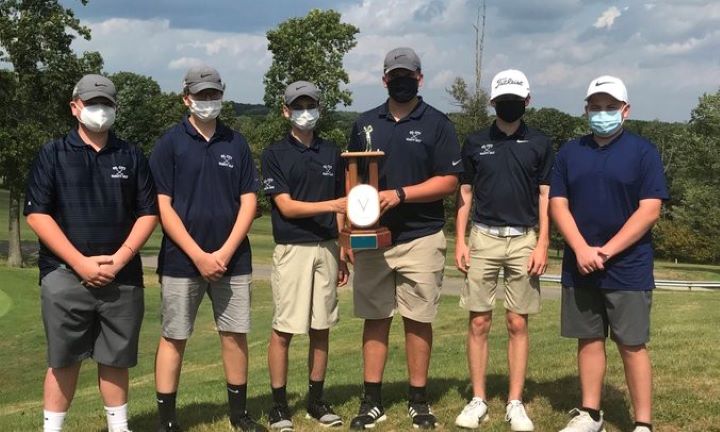 Below are recaps from the events we received information from. If your information isn’t listed, please e-mail us at scores@d9and10sports.com.

Rocky Grove’s Travis Knupp took third shooting a 95, as the Oilers came in fourth with a team score of 430.

Franklin was third with a team score of 428. The Knights were led by Jimmy May, who finished fifth with a score of 100.

Hickory’s Cameron Colbert took top honors with a 78 followed by Slippery Rock’s Jacob Wolak (79) and Norris (80). Sharon’s Jacob Cattron was fourth (82) followed by Matson in fifth with an 84.

In the team standings, Slippery Rock (356) was third, West Middlesex wad fourth (378), Sharpsville was fifth (395), Wilmington was sixth (427) while Sharon didn’t have enough golfers to score.

The top golfer for Wilmington was Kaitlyn Hoover with an 85, Caden Bender led West Middlesex with a 91, and Jake Allen paced Sharpsville with an 88.

KINSMAN, Ohio – Behind a medalist performance from freshman Sasha Petrochko, the Hickory girls rolled to a mega-match win at Bronzwood Golf Club in Kinsman, Ohio.

Petrochko shot a 78 in her first high school match, and Hickory shot a 237 as a team easily outdistancing second-place Reynolds, which shot a 287.

McKenzie Gustas was one shot back of her teammate Petrochko carding a 79 to come in second place, while Leah Benson made it three Hickory Hornets in a row shooting an 80 to take third place.

Alaina Harpst led Reynolds with an 83.

Sharpsville was third shooting a 309 led by Keelie Steiner’s 93, while Conneaut (Pa.) and Grove City tied for fourth with a 328. Allison Simonetta led CASH with a 104, while Emily Donahue shot an 88 for Grove City.

The Region – if it stays the way it is currently drawn up – will be back in action Sept. 3 at Deer Creek.

Swan shot a 70 to edge fellow Grape Picker Carter Hassenplug (75) for the top honors, as North East shot a team total of 351.

McDowell, behind an 84 from Max Paris, was second with a team score of 358, while Mercyhurst Prep shot a 359 with Hunter Farrell shooting an 81.

The Raiders edged Tyrone, 347-356. Clearfield, the lone District 9 team in the Mountain League, finished sixth with a 418 led by Ryan Gearhart, who finished tied for 16th with a 95. He tied Tyrone’s Cyrus Alhert for 16th.