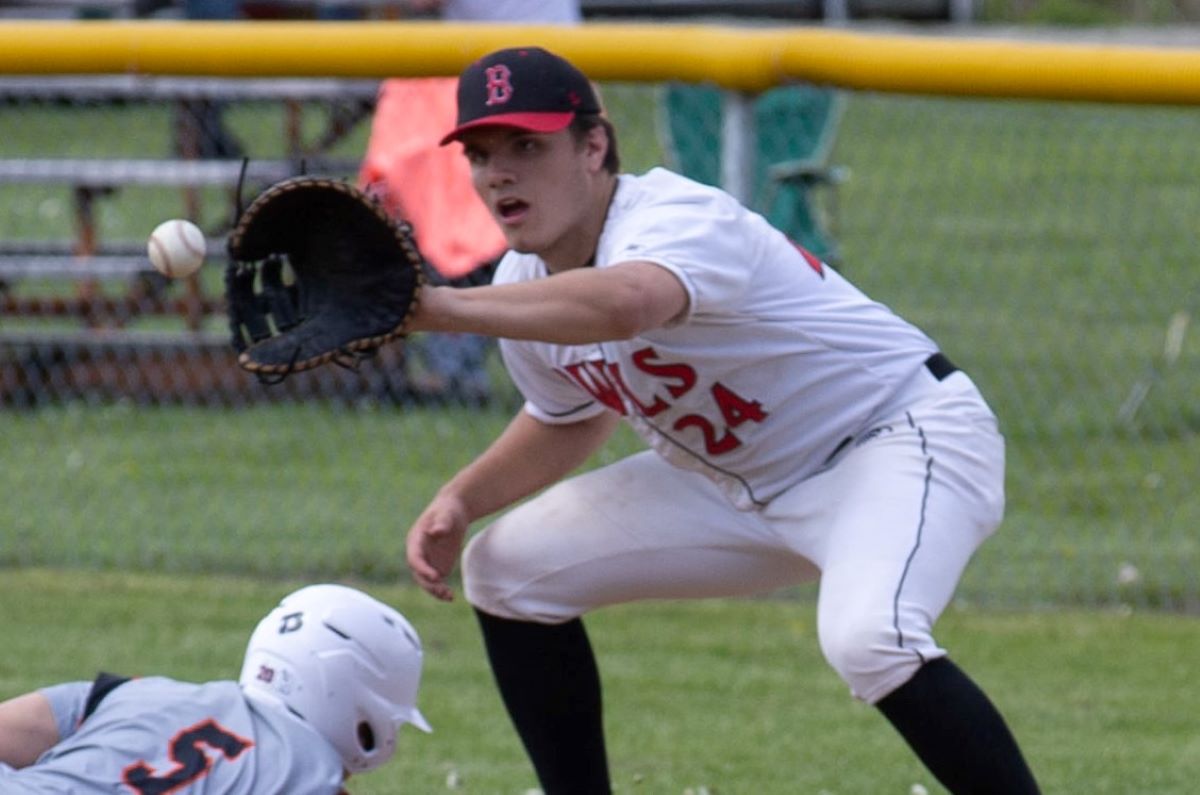 Three District 9 baseball teams threw no-hitters Friday with St. Marys’ Charlie Coudriet tossing a five-inning no-no in an 11-0 win over Elizabeth-Forward, Bradford’s Nolan Roulo and Cam Austin combing to not allow a hit in a 5-4 win over Salamanca (N.Y.), and Redbank Valley’s Bryson Bain, Ty Carrier, and Cam Wagner combining on a no-hitter in an 11-0 win over Brockway.

DUBOIS, Pa. – Charlie Coudriet was effectively wild walking six and hitting a batter while striking out 10 in not allowing a hit to Elizabeth-Forward in five innings of work at Showers Field in DuBois.

He was backed up by the hitting of Cameron McMackin, Carter Price, and Connor Bullers, who all had multiple RBIs for the Dutch.

Coudriet helped himself by going 2-for-4 with two runs scored, while Conner Straub was 3-for-4 with a run scored and an RBI.

The Bulldogs had 13 hits in the game led by Owen Clouse, who was 3-for-4 with three runs scored and two RBIs.

Tate Minich was also 2-for-4 with a double, a run scored, and two RBIs for Redbank Valley with Carrer going 2-for-2 with a run scored and Breckin Minich 1-for-2 with two RBIs. Wagner had a double and a run scored in his line plate appearance.

SALAMANCA, N.Y. – It was anything but a traditional no-hitter for Bradford, as the visiting Owls had to hold off a three-run rally by Salamanca in the sixth inning to get a 5-4 win.

Roulo got the win going 5 ⅔ innings of hitless ball. He walked four and struck out three. Austin picked up the save not allowing a hit nor a walk in 1 ⅓ innings of work.

Three walks and an error in the sixth allowed Salamanca to score its three runs after it picked up a run in the second thanks to a walk, two stolen bases, and a wild pitch.

Austin went 2-for-4 with the RBI, as he was the lone Owls player with multiple hits. Bradford had just five hits in the game.

Jason McGraw took the loss going 1 ⅔ innings allowing five runs, all earned, on four hits, two walks, and a hit batter while striking out one.

SHINGLEHOUSE, Pa. – A nine-run sixth innings helped Smethport break a 6-all tie on its way to a 15-6 win over Oswayo Valley.

The Hubbers sent 14 batters to the plate in the sixth and used five hits, four walks, and two hit batters to score the nine runs, six of which came after two outs.

Noah Lent scored the eventual game-winning run on an error by the catcher, and the floodgates opened after that, including an RBI single by Brandon Higley that made it 8-6.

That was one of six RBIs for Higley, who was 4-for-4 with two doubles, a walk, and two runs scored.

Travis Cooney also drove in three runs for the Hubbers while going 2-for-5 with a double.

Alex Ognen added a pair of hits and scored five times for Smethport while going 2-for-3 with a triple, a walk, and an RBI, and Lent also scored three times going 1-for-3 with a walk and an RBI.

Alek Harmon was 2-for-3 with a double, a run scored, and an RBI for Oswayo Valley with Ian Bilsko going 1-for-4 with a double and two RBIs.

BUTLER, Pa. – Keagan Book went 2-for-3 with a double, a walk, and three RBIs to help Moniteau beat Keystone, 12-1, in five innings at Michelle Krill Memorial Field at Historic Pullman Park in Butler.

Brock Matthews added a pair of RBIs for the warriors going 1-for-3 with a double, a walk, and a run scored, and Branson Carson was 2-for-3 with a walk and two runs scored.

Seth Apel was 1-for-2 with a double and a run scored for Keystone.

Dawson Wallace got the win going five innings needing just 51 pitched despite striking out 10. He allowed one earned run.

Sam Hogue took the loss going ⅔ of an inning allowing five unearned runs. He didn’t allow a hit but walked six and hit one while striking one.

BROCKWAY, Pa. – Nevada Boyer went 4-for-4 with a run scored to help Redbank Valley to a 6-5 win at Brockway.

Danielle Wood went 3-for-4 with a run scored and three RBIs for Brockway.

SHINGLEHOUSE, Pa. – MacKenzie George went 3-for-4 with a home run, three runs scored, and an RBI to lift Oswayo Valley to an 8-6 win over visiting Smethport.

Laya Phillips added three RBIs for the Green Wave going 2-for-4 with a pair of doubles, while Brooke George was 2-for-3 with a walk, an RBI, and three runs scored.

Coryn McClain was 3-for-4 with a run scored and an RBI for Smethport.

KARNS CITY, Pa. – Karns City scored 21 runs on just three hits on its way to a 21-2, three-inning victory over Union in a game held at Karns City with Union as the home team.

Zoe King was 2-for-2 with a pair of doubles and three runs scored for Karns City.

Mackenna Davis was 1-for-2 with a run scored for Union.

April 8, 2022 D10 Baseball/Softball: Strong Pitching Continues for Saegertown Baseball; Hickory Softball Triumphs
D9and10Sports to Broadcast C-L at DuBois Central Catholic Softball Saturday, April 9
This website or its third-party tools process personal data.In case of sale of your personal information, you may opt out by using the link Do not sell my personal information.
×
Manage consent